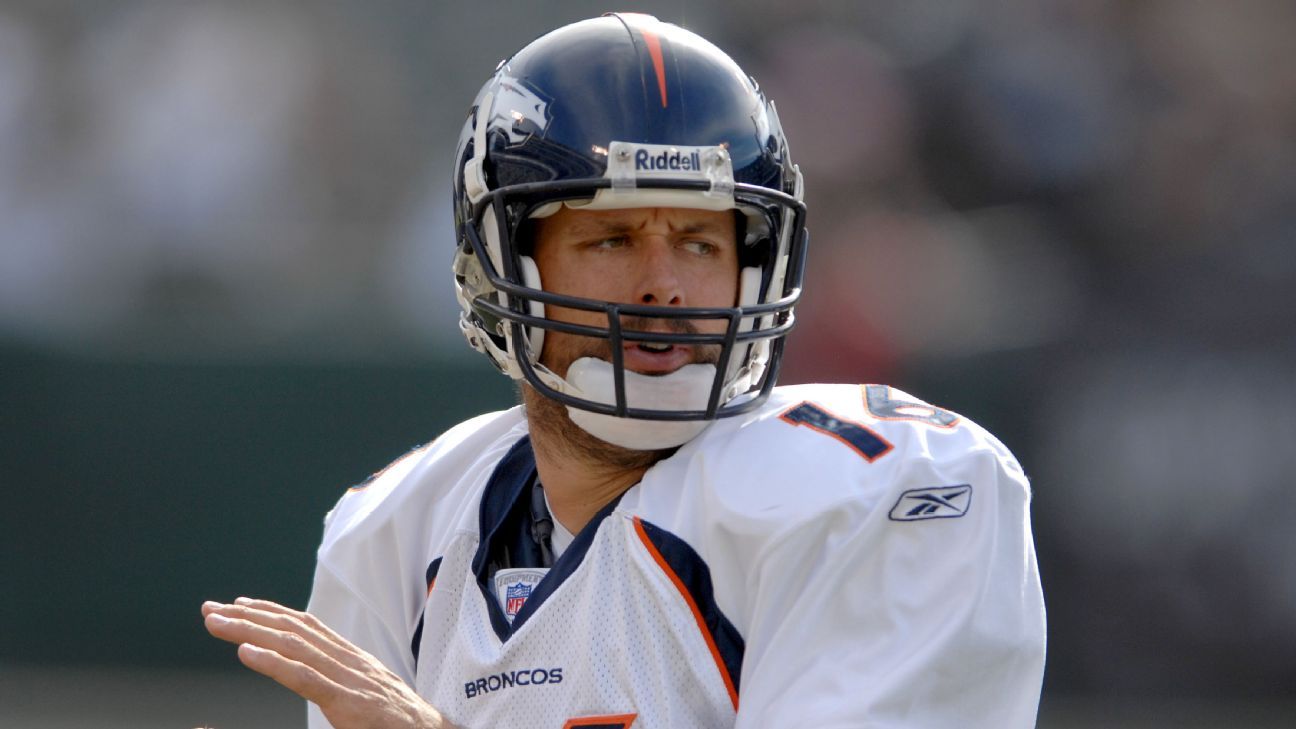 
ENGLEWOOD, Colo. — As the Denver Broncos make plans for their newly signed quarterback to flourish in the kind of offense that has brought the team some of its greatest successes, it is a good time to check in with a former player who once walked in those exact shoes.

For while Case Keenum is the Broncos’ quarterback of choice to lead the climb out of last year’s 5-11 finish, while he is a player the Broncos believe has even more to give than the career-best 3,547 yards and 22 touchdowns he posted last season, it is Jake Plummer who knows both the weighty expectations and the potential for football glory that await Keenum.

Because Plummer has been that guy for the Broncos.

In the cascade of historic numbers that came out of Peyton Manning’s time with the Broncos, including the highest-scoring season in league history and two Super Bowl trips, it can be easy to forget where Plummer fits.

Until Manning’s arrival, no quarterback in team history had helped lead the Broncos to a higher percentage of wins in his starts than Plummer’s .722 mark. Plummer’s 4,089 passing yards in 2004 were a franchise single-season record at the time and he still holds the franchise record for consecutive passes without an interception. Plummer was, as a player, fiery and irreverent, and at times he swam against the current convention.

But Plummer believes emphatically in the offense he thinks John Elway and coach Vance Joseph plan to run with Keenum at quarterback, because he ran a version of it. He calls the Broncos, even after his somewhat messy benching by Mike Shanahan in 2006, when Jay Cutler was a rookie and the Broncos were 7-4, “a team with people that will do anything and everything you need to win a Super Bowl.’’ Plummer also believes the quarterback has to do his part and understand what he’s getting into.

Elway has often said that simply handling all the intangibles that come with the job of quarterback can be more difficult than the football part. That maintaining confidence through the rough spots, handling criticism and leading a locker room impacts how a quarterback plays after the ball is snapped.

Players who landed in perfect spots »
• Highest-paid players at every position »
• Who really got best free-agent deals? »
• Biggest remaining need for all 32 »
• Are Vikings NFC fave with Cousins? »
• Fantasy impact of key deals, moves »

Trevor Siemian, Paxton Lynch and Brock Osweiler were all cycled through the starting job last season, and none of the three could rise above an often ill-fitting offense or stop the flood of turnovers. Both Elway and Joseph have routinely used the word “grit’’ to describe an important attribute Keenum brings to the table.

“Rebounding from mistakes, that’s all this league is sometimes for a quarterback,’’ Plummer said. “Everybody, of course, wants Tom Brady or Peyton Manning, but watch their film, they have days, they have times, when they suck. But when it matters most, those guys don’t remember that, all they do is ball out and make the plays now. You have to be a consistent badass. That’s what you’re looking for, a consistent badass.’’

The Broncos, since Pat Bowlen bought the team more than three decades ago, have had more Super Bowl trips than losing seasons. Their current GM happens to be a Hall of Fame quarterback whose picture is scattered all over the team’s complex. Manning’s unprecedented four-year run, which included a 55-touchdown season as well as a Super Bowl win, is still fresh in the minds of most everyone in the seats on game day. In short, Broncos quarterback is a gig that comes with a cargo plane’s worth of baggage in tow.

And beyond game plans, arm strength and creativity on the playcalling, Plummer sees the ability to handle that legacy as one the most important items for Keenum or anyone else who tries to fill the job.

“Watching their games is the most important thing and I would like to sneak down on the sideline and watch him come off after an interception and see what they do,’’ Plummer said. “Does he sulk on the sideline? Oh, pity me, I’ve got to answer for a mistake. Or are they over yelling at their defense to gimme the damn ball back so I can go score.

“But so much is expected and if you can’t handle that, don’t come here … Even Peyton took some flak when he didn’t win it all. But this is a place where you have everything you need to win, they’ll do every single thing in the world that needs to be done. It’s up to you to make the plays when it’s time to make the plays. But if you don’t want that, don’t come.’’