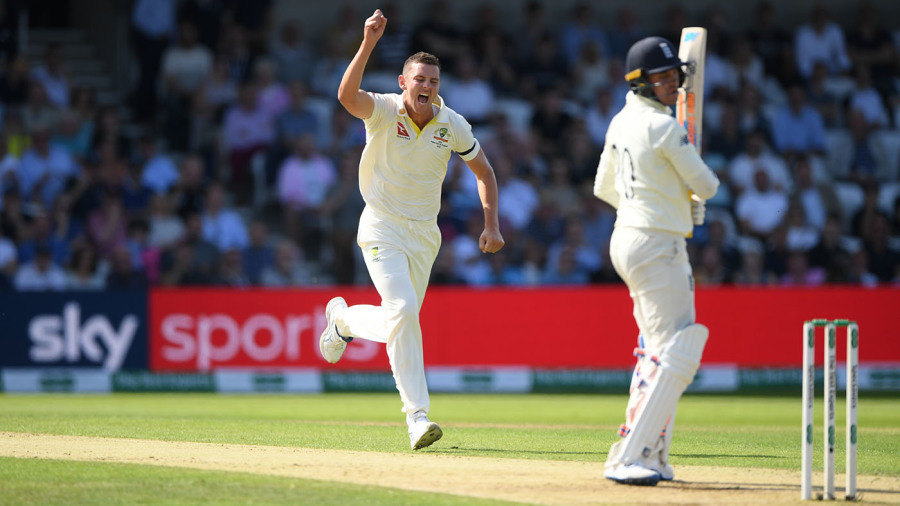 A dire capitulation with the bat left England’s Ashes hopes hanging by a thread after another thrilling day in this engrossing series.

Credit goes to Australia’s strike bowlers – led by Josh Hazlewood‘s devastating five-wicket haul – for putting Australia in positition to win the third Test at Headingley and take a 2-0 lead in the series, which would allow them to retain the urn, with three days still to go in the match. But England did not help themselves one bit, bundled out for just 67 in reply to Australia’s first-innings 179 with rash shots an all-too-common feature.

Sixteen wickets fell on a day when Joe Denly was England’s top-scorer with just 12, Jason Roy‘s struggle to establish himself as a Test opener faltered again and Joe Root made consecutive ducks for the first time in his career as questions resurfaced about his batting position.

In all honesty, just about everyone in an England helmet looked out of position and out of their depth in innings like that as Hazlewood struck early en route to claiming 5 for 30, well supported by Pat Cummins and James Pattinson, who chimed in with three and two wickets respectively.

England were in all sorts of bother at 10 for 2 after Hazlewood had Roy and Root both caught in the slips by David Warner – who had not only rediscovered some form with the bat, striking 61 the previous day, but also in the field, overcoming a rash of dropped chances earlier in the series to hold four on the second day at Headingley – the most ever in an innings by an Australian fielder in an overseas Ashes Test.

Roy was out driving at a Hazlewood delivery which was wide of off stump and moved ever so slightly to draw the edge, while Root hung his bat out to a good ball which had a hint of movement off the seam. When Burns gloved a Cummins bouncer to Tim Paine behind the stumps, Engalnd were 20 for 3 and from there the procession of cheap wickets continued.

Ben Stokes toiled for a mammoth15.2 overs between lunch and tea, with only four balls breaking up his spell before he was called back into action when Jofra Archer suffered leg cramps. Stokes’ efforts delivered two wickets for England, alongside two for Stuart Broad, as Australia finished with a a lead in excess of 300 well within their sights with Marnus Labuschagne passing fifty for the third time in as many innings and still unbeaten at the close.

With three days yet to build their lead and then bowl England out, Australia are in the best position they could have hoped for after grafting in difficult batting conditions on the opening day for their total of 179. Labuschagne top scored in Australia’s first innings with 74, just as he did as Steve Smith’s concussion replacement with 59 in the second innings at Lord’s .

Australia’s prospects didn’t look so great when Warner was out lbw for a duck, dismissed for the fourth time by Stuart Broad in six innings this series. Marcus Harris followed soon after and, when Usman Khawaja was out to a loose shot off Chris Woakes which was caught by Roy, they were 52 for 3.

But Travis Head and Labuschagne dug in and it was a long time before Stokes, brought into the attack in the second over after tea, made the breakthrough. Stokes tried with all his might to make things happen for England, delivering a maiden first up and suffering a dropped catch – Labuschagne juggled and spilled by Root in his second over.

In his thrid over, Stokes hit 89mph bowling to Labuschagne, who – luckily for Australia – left it alone. Not so fortunately for the tourists, Stokes dismissed Head in the next. Matthew Wade treated an 88mph Stokes delivery with disdain, flicking it through midwicket for four before Stokes responded by peppering Wade with a series of short balls.

Stoke bowled eight overs straight before he was replaced by Archer but, four balls into the over, Stokes had to finish it when Archer was struck down by cramp. Archer eventually returned to the field, to the delight of the crowd, whose watermelon-shaped beach ball he had saved from the clutches of a security guard earlier. But Stokes bowled on and eventully struck again in his 13th full over with the wicket of Wade, caught behind by Jonny Bairstow. That prompted Stokes to collapse on the ground, and exhaused grin on his face as his team-mates gathered round to congratulate him.

Broad had Paine out amid some confusion over whether it was lbw or a caught, prompting the batsman into a hopeful appeal, but he was indeed caught by Denly for nought, nonetheless leaving his side in decent shape.