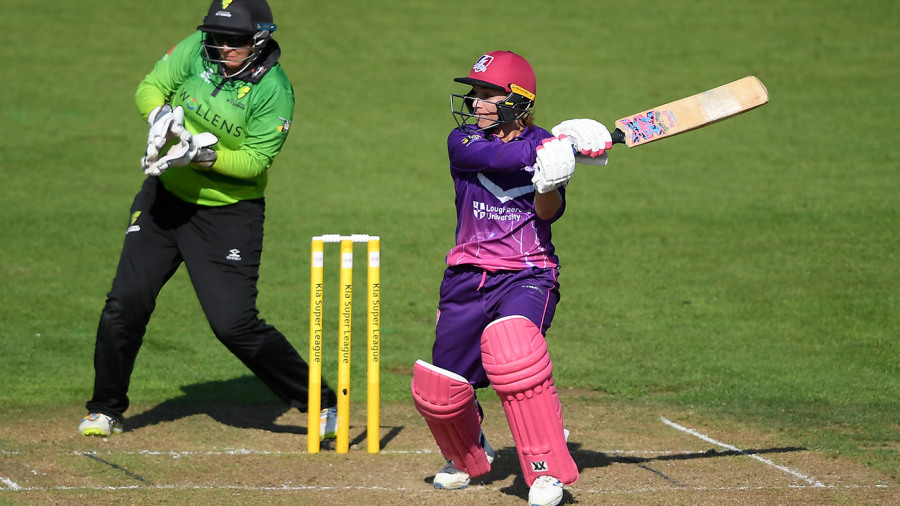 Mignon du Preez scored an unbeaten 48 for Loughborough Lightning to send her side to a second successive Kia Super League Finals Day – while knocking holders Surrey Stars out the competition.

South African du Preez is Lightning’s highest scorer in the KSL this season with 246 runs, having previously made unbeaten scores of 70 and 38, before clattering 48 in 25 balls at the Haslegrave Ground, Loughborough.

She finished the job with a four down the ground with nine balls to spare, after Chamari Atapattu had brilliantly notched 45 from 35 balls. Stars had set what had seen a competitive 147, thanks to Nat Sciver‘s first half century of the tournament and Sarah Taylor‘s second fifty in a row.

But the hosts chased well to set up a date with either Southern Vipers or Yorkshire Diamonds at Hove – with unbeaten Western Storm waiting in the final.

Loughborough’s response had started in catastrophic style as Amy Jones was run out by Dane van Niekerk, before Marizanne Kapp bowled a maiden.

Having been involved in the Jones run out, Hayley Matthews seemed to feel some responsibility to score quickly, as she helped thunder 24 runs off the third and fourth overs. But the West Indian was stumped off Mady Villiers in the fifth.

Georgia Elwiss and Atapattu settled things down and added 49 in exactly six overs for the third wicket before the former was stumped.

Sri Lankan Atapattu used her power to take Lightning up to, along and then above the required rate – with six boundaries and a straight six, before she was bowled by Laura Marsh.

Du Preez, who had put on 41 with Atapattu, clubbed a quartet of balls over the ropes, and despite seeing Georgia Adams run out, saw her side to a comfortable five-wicket win.

Earlier, the Stars only managed 29 runs in the powerplay, after winning the toss, and had already lost both openers Lizelle Lee and Dane van Niekerk within the first 32 balls.

Lee was lbw to Kathryn Bryce to the first ball of the game before South African teammate van Niekerk was bowled by Jenny Gunn.

But Sciver and Taylor ticked the score along and slowly started to accelerate – the former playing conventionally, while keeper Taylor utilised her supple wrists to claim five flicked boundaries behind the bat.

Skipper Sciver was the first to fifty, off 31 balls, having tickled Atapattu for a boundary before arriving at the milestone with a hoicked single into the leg side.

It was the first time she had scored a KSL half-century since the semi-final against Western Storm last year.

Sciver departed when she offered a catch to extra cover for 53, having put on 87 with Taylor – the third time the duo had added more than 48 together in this season’s competition.

Taylor arrived at the 50 landmark in 45 balls with back-to-back boundaries off Bryce, but the Scotland captain had the last laugh next ball with a slower ball yorker.

Surrey lost Kapp, Bryony Smith and Villiers in the last seven balls but managed to reach 147 for seven, despite Gunn’s exceptional two for 19.