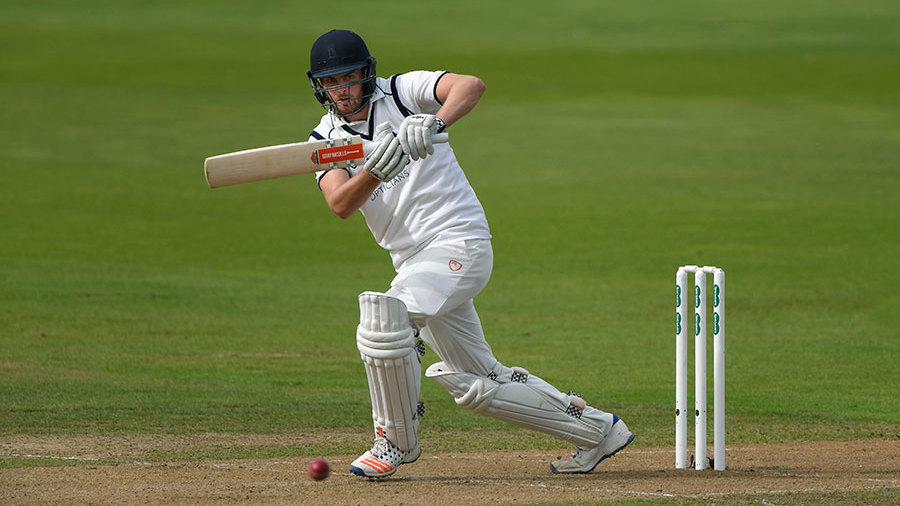 Dominic Sibley reeled off his fourth century of the Specsavers County Championship season on the second day of Warwickshire’s match with Nottinghamshire at Trent Bridge.

Sibley has scored his runs from 230 balls with 17 fours and has reached three figures for the 11th time in his career and fourth time this season. The opener was joined in an unbroken third-wicket partnership of 143 with Sam Hain, who is not out on 67.

Earlier, Notts batted on from their overnight score of 425 for 6, with R Ashwin and Paul Coughlin at the crease. Ashwin advanced his score to 38 before nicking behind to Michael Burgess, giving Henry Brookes, who took 3 for 131, his third wicket.

Oliver Hannon-Dalby then had Luke Fletcher caught in the gully by Liam Banks for 10.

Warwickshire missed out on a final bowling point but eventually ended the Notts innings after 115.4 overs.

Coughlin went past his previous high score of 46 for the county but was one short of his half-century when given out lbw against the bowling of George Garrett.

Zak Chappell also reached double figures for the county for the first time and even had time to reverse-sweep Jeetan Patel for a boundary before nicking Garrett to Hain at slip for 20.

Warwickshire made a positive response in front of watching England selector James Taylor. Nottingham-born Will Rhodes made 36, helping Sibley add 77 for the first wicket before being pinned lbw by Coughlin.

Rob Yates’ was the other wicket to go down in mid-afternoon, squared up Ashwin and caught at mid-on from a thick inside-edge. The dismissal was Ashwin’s 33rd wicket for Notts in only five matches – and came on the day he celebrated his 33rd birthday.

Sibley’s hundred came from 198 deliveries and contained 15 boundaries. He has now registered centuries in seven of his last 15 championship matches.

Steven Mullaney, who scored 179 on the first day, bowled for the first time in three months. The Nottinghamshire captain sent down seven overs and has put himself into the running for a spot at Vitality Blast Finals Day after fully recovering from knee surgery.