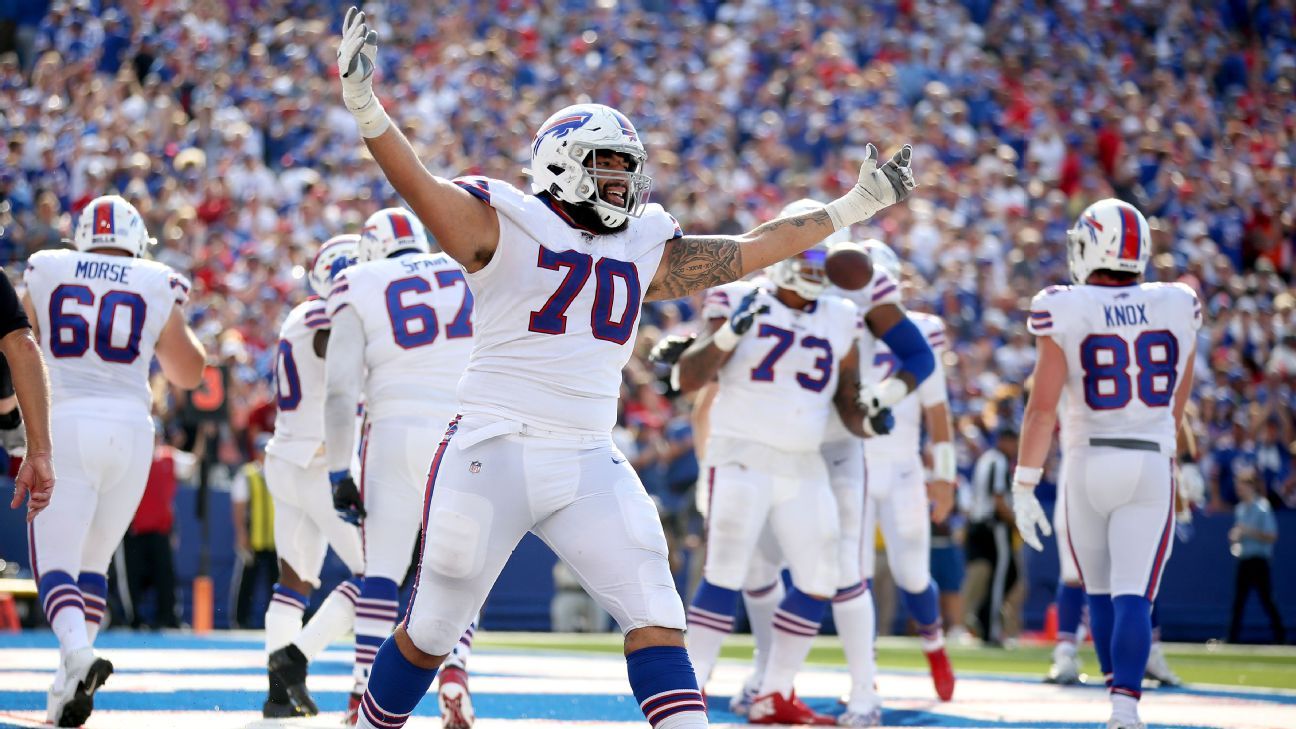 
Grab your best breakaway tailgate tables, Buffalo. Your Bills are 3-0, and the undefeated Patriots are coming to town next week. If you’ve been under the radar so far, that’s all about to end.

You never know where the big games are going to pop up on the NFL schedule, but my goodness, there’s a battle for first place in the AFC East in Week 4 in upstate New York. The Patriots walloped the Jets in Foxborough on Sunday afternoon, while Buffalo held off Cincinnati. What better way to lead off an overreaction column than with a wild Week 3 assertion about the Bills?

The Buffalo Bills will make the playoffs

Buffalo has started the season 3-0 for the first time since 2011 and only the third time in the past 26 years. The Bills are allowing only about 15.6 points per game. Josh Allen is getting it done, somehow. The Bills had a strategic and quietly extensive offseason of improving their receiver corps and offensive line around Allen, and so far it appears to be paying off.

The verdict: NOT AN OVERREACTION. Since 1990, 73.8% of teams that started the season 3-0 reached the playoffs. So, start right there. They have a much better chance of making the postseason at this point than missing it. And you don’t have to believe they’ll beat the Patriots next week in order to believe they can claim a wild-card spot in the AFC.

Look at the schedule. The Bills play Washington, Denver and the Jets at home. They have a road trip to Tennessee. They still get to play the Dolphins twice. We just got them to nine wins right there. Beat the Pats next week at home, and you have to fire up the playoff ticket printer in Buffalo for the second time in three years.

The Giants got it right with the Daniel Jones pick

Whoo boy, did the No. 6 pick in this year’s draft have a debut Sunday: 23-for-36, 336 yards, two touchdown passes, two more rushing touchdowns, and he did something the Giants had only done eight times in their previous 35 games: He won.

The news of the early part of last week was the Giants’ decision to bench franchise icon Eli Manning and start the rookie in his place, and Jones delivered on the coaching staff’s decision. He led the Giants back from an 18-point deficit to their first victory of the season, and he did it in thrilling, fearless fashion.

The verdict: NOT AN OVERREACTION. Seriously, Giants fans. Soak. This. Up. Your team hasn’t given you much of anything to feel excited about over the past seven years. Spend the week with your chests puffed out in the belief that Manning’s successor is real and he’s spectacular. Don’t let the Saquon Barkley injury or the fact that your tissue-paper defense almost gave away the game spoil your mood. Those problems will be there when you come down off your high.

But enjoy the high. Jones spent a glorious Sunday afternoon showing you what the team saw in him on draft night. His mobility and deep-ball throwing ability offer Pat Shurmur the ability to run a lot more of his offense than he has since he became the coach in 2018. Jones is a rookie, and they all have ups and downs, and of course there will be weeks where it isn’t this good. But if this kind of performance is inside of this kid, you’re in good hands.

There’s no way to know exactly what path he takes from here, but Giants fans need to revel in what they saw Sunday. If you can’t enjoy moments like this, what’s being a sports fan all about?

Chris Berman and Tom Jackson describe what they liked from Daniel Jones in his first NFL start. To watch NFL Primetime, sign up here for ESPN+ http://plus.espn.com/.

The Philadelphia Eagles‘ injuries will keep them out of the playoffs

You knew, when they switched from practice to a walkthrough in the middle of the week because of injuries, that things were serious on that front in Philly. Wideouts DeSean Jackson and Alshon Jeffery missed Sunday’s game and are in doubt for their next one, which not-so-conveniently comes Thursday against the 3-0 Packers. Quarterback Carson Wentz made it through the loss to the Lions without any new physical ailment, but that only extends that streak to one game. The Eagles are 1-2 and looking up at the 3-0 Cowboys in their division.

The verdict: OVERREACTION. There is too much recent history here of a team that overcomes its issues. Too much good coaching. Too much roster depth. The Eagles are taking their injury lumps right now, but they can’t be ruled out. And even if they can’t get it together in time for Thursday and they fall to 1-3, they’d still have three quarters of a season left to fix it all. They’re not a team to bet against.

Adam Gase’s squad went into Foxborough on Sunday with its third starting quarterback in as many weeks and, wouldn’t you know it, wasn’t competitive. The Jets fell behind 30-0 before cutting the deficit to something more respectable with a special-teams touchdown and an interception-return touchdown once the game was out of hand. They are 0-3, have been outscored 70-33 and might be the first team in league history to be thrilled about a Week 4 bye.

The verdict: OVERREACTION. Yeah, the Jets have been outscored 70-33. The Dolphins? They’ve been outscored 133-16! This isn’t the same ballpark of stink. Sam Darnold will come back from his bout with mono. C.J. Mosley should come back soon from his groin injury.

I get that it’s depressing if you’re a Jets fan to watch this product, and that it feels like a lot of same-old, same-old. But if you had hopes in August that this season would offer hope for the future, it’s OK to harbor those same hopes for the final three-fourths of the season. It has to get better. Right?

The Detroit Lions will make the playoffs

Detroit blew a big lead Week 1 in Arizona, ended up with a tie, and things looked bleak. The next five games on its schedule at that point were against the Chargers, at the Eagles, against the Chiefs, at the Packers and against the Vikings. It was pretty easy to imagine the Lions being 0-5-1 through six games. Now, though, they’ve won the first two games in that gauntlet and are one of the NFL’s remaining undefeated teams.

The verdict: OVERREACTION. Get back to me if they beat the Chiefs next week. Seriously, nothing against the Lions. I believed, wrote and said on television more than once that I thought they had a chance to be a decent team.

But I also believed, and still do, that they play in the toughest division in the league. Green Bay is 3-0. Minnesota is 2-1 and has looked great in two games (and lousy in the one in Green Bay). The Bears still have a stifling defense, and you figure they’ll get the offense together eventually.

It’s cool to be excited about what the Lions are doing, and sure, if things go wrong for those other teams along the way, they could absolutely sneak into a playoff spot. It’s just too early, given the challenges that still await, to be throwing any parades.

Antonio Brown will never play in the NFL again

Released by the Patriots on Friday, the erstwhile No. 1 receiver in the game has been let go by three teams in the past seven months. Unlike last time, there was no new contract with a contender waiting for him minutes after his release. Right now, Brown is under NFL investigation due to serious allegations of sexual assault and other misconduct by two women. That investigation could lead to Brown being suspended by the NFL, and teams understandably want to wait to see whether than happens before deciding whether to sign him.

The verdict: NOT AN OVERREACTION. You can’t rule anything out, and especially if Brown is exonerated — he denies the accusations — his talent is enough that teams will come calling. But given the explosive manner in which he got himself traded by the Steelers, released by the Raiders and rendered too much for the Patriots to handle, there’s an overflowing 747 cargo hold full of baggage that will accompany Brown to wherever his next stop might be.

And that assumes he’s exonerated, which he very well may not be. More could come out, and Brown continues to hurt his own case by doing things like sending intimidating texts to his accusers and tearing apart league owners and players in Twitter rants. He could play again, but it’s far from an overreaction to say that he’s done.