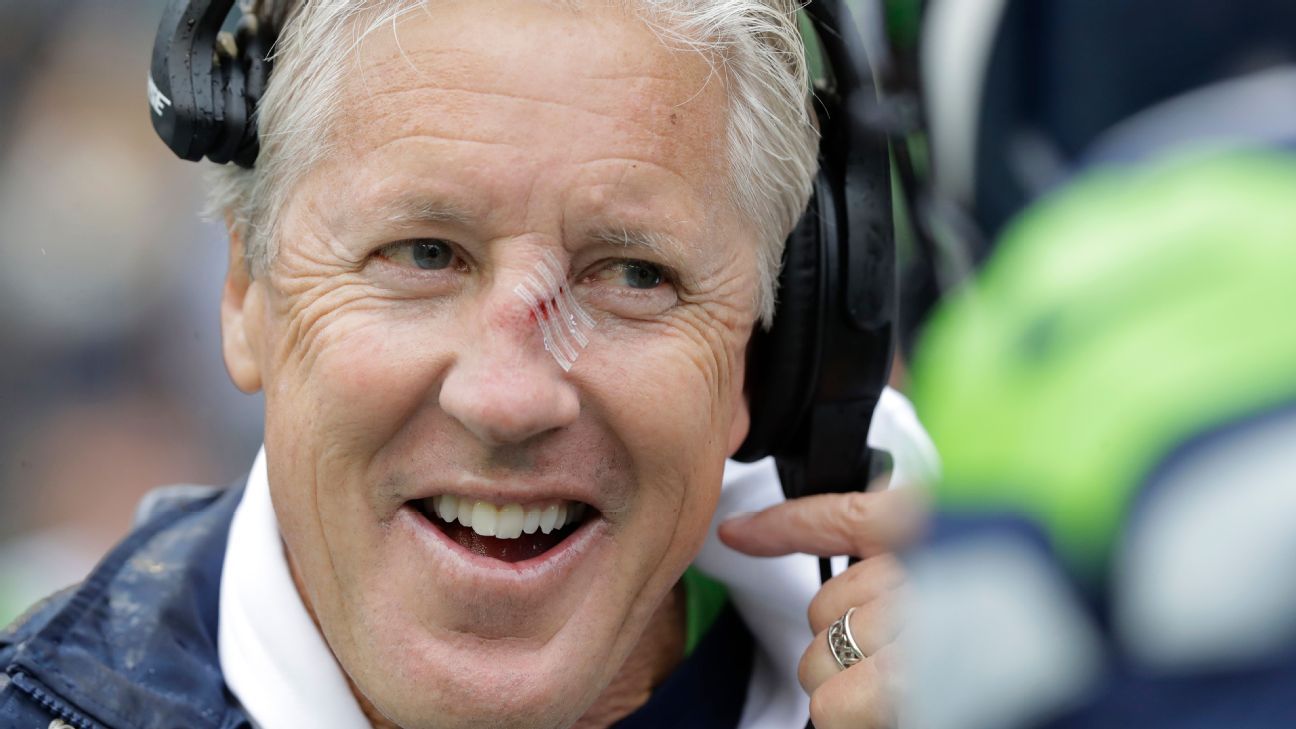 SEATTLE — A regretful Pete Carroll admitted he had a bad day at the office on Sunday, a reference to some coaching miscues he made in the Seattle Seahawks‘ 33-27 loss to the New Orleans Saints.

Also part of Carroll’s bad day: The nose injury he suffered after taking an errant football to the face beforehand.

As miffed as he was about all the mistakes that caused the Seahawks (2-1) to drop a home game against the Drew Brees-less Saints, Carroll maintained a sense of humor about his injury. Blood was still visible under the clear bandages on the bridge of his nose as he joked about it postgame.

“It would have been a really good story that I had head-butted Bobby [Wagner] in the pregame, getting fired up in the locker room, but I heard that they captured it on film,” Carroll said. “I got smacked in the nose with the football. The last play of warm-ups. I didn’t see it coming.”

Replays showed Carroll unknowingly running right into the path of a ball that rookie linebacker Cody Barton had tossed from a short distance to an assistant coach as the Seahawks made their way back to the locker room.

Asked if his nose was broken, Carroll replied: “It’s been broken many times.”

The Seahawks entered Sunday with a 15-0 record in September home games since Carroll took over in 2010. That streak ended amid a flurry of Seattle mistakes, starting with a short punt by Michael Dickson in the first quarter that Deonte Harris returned 53 yards for a touchdown.

The Saints scored their next touchdown when Vonn Bell returned Chris Carson‘s third fumble in as many games for a touchdown. Seattle committed seven penalties for 53 yards, including an illegal formation on a missed Saints field goal to extend a drive that resulted in a 1-yard Michael Thomas touchdown catch from Teddy Bridgewater.

“This was an unusual game,” Carroll said. “So many things happened in this game that just hurt ourselves. Even the coach got hurt in this one. We made mistakes, errors, the big plays, the returns, the mistake in the kicking game that gives them a chance for another touchdown — it’s like a turnover. We just had a really hard time getting out of our own way.

“Sometimes the game goes like that and you just can’t get out of our own way, you make the mistakes that caused the problems, and you try to recover. We just didn’t get it done. I had a particularly bad day. There were too many chances I had to make some things happen, and I tried too hard at times.”

Carroll regretted his decision to go for it on fourth-and-1 from the Saints’ 41 with 2:37 left in the first half. The Saints stuffed a Carson run and scored seven plays later on a 29-yard touchdown catch by Alvin Kamara, who broke several tackles on his way to the end zone.

“I thought right at the end of the first half, I didn’t do that well, and I wished we would have kicked the ball and made them go the long way and not give them a chance to score, which they did,” Carroll said. “So they took advantage of the opportunities in a really winning way. [Sean Payton’s] guys played really good to get that done.”

The Seahawks were 1 of 4 on fourth down.

“I could have changed the situation on fourth down some,” Carroll said. “I could have kicked the ball and done a couple more conservative things that I like to do often, but I felt pretty good about how we were playing D. I tried too hard. It was one of those deals.”

The Seahawks had a chance to score right before halftime when Russell Wilson connected with DK Metcalf for a 54-yard gain to the Saints’ 16. But they couldn’t call one of their two timeouts before time expired. Carroll wanted a do-over on letting the clock run after the completion that proceeded Metcalf’s catch.

“If we knew that was going to happen, I would have called timeout earlier,” he said. “But it didn’t work. That was just kind of how things went. It was one of those days.”

Another decision that Carroll wanted back: Kicking an extra point after Wilson’s touchdown run with 2:55 left. That cut New Orleans’ lead to 33-21 whereas a successful two-point try would have put the Seahawks in position to tie the game with another touchdown, another two-point conversion and a field goal.

The Seahawks play the Arizona Cardinals (0-2-1) next Sunday in Glendale.

“There were just so many ways in this game for it to be different,” Carroll said. “It’s just unfortunate. It’s very frustrating. But this is one game. Maybe this is the one game that we learn from and we grow from and we can put this one behind us, and we can turn things in the right direction and not let this happen. It’s particularly hard to do this in front of our own fans at home.”