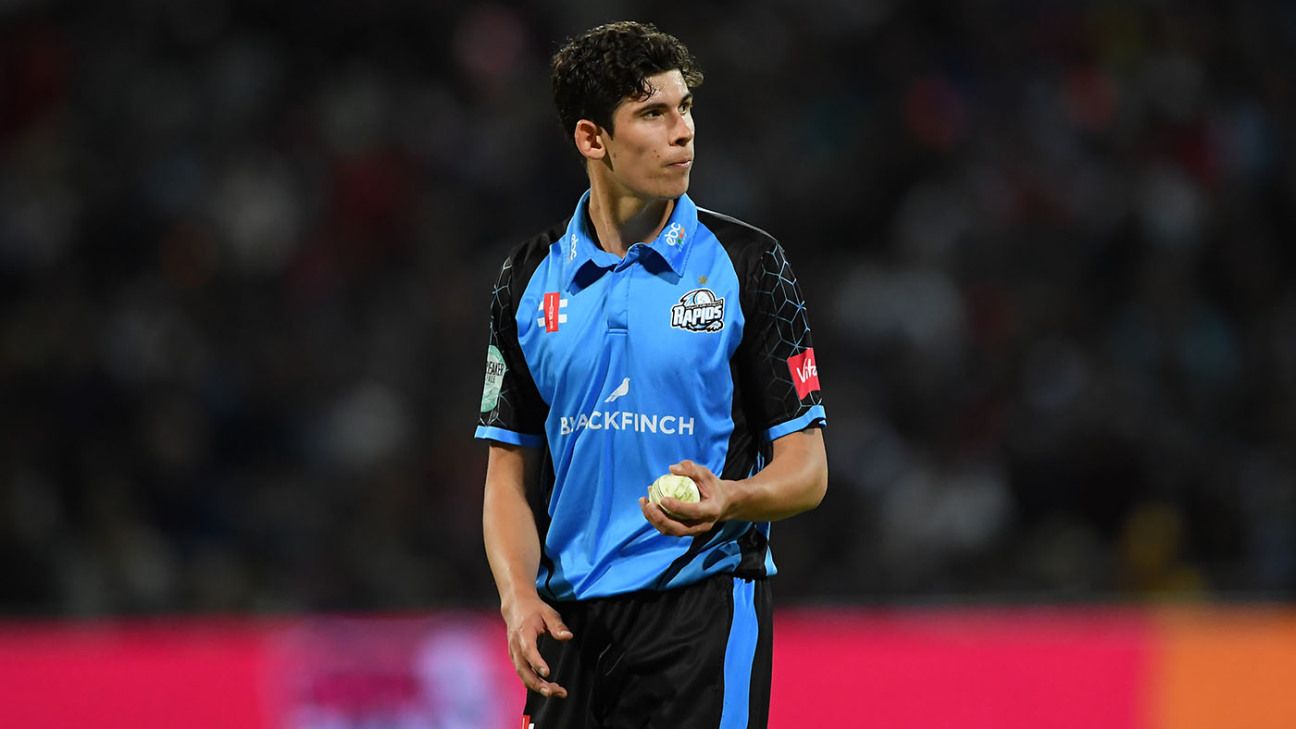 Pat Brown was playing golf when he got a phone call from Ed Smith on Monday afternoon, and had to tell the friend he was with: “pick my ball up – I’m going to be five minutes”.

England’s chief selector called Brown to let him know that he was part of England’s squad to play five T20 internationals in New Zealand this winter, and the 21-year-old seamer said he was “speechless” in response.

“It’s absolutely incredible,” he told ESPNcricinfo. “I didn’t really expect it to be honest. It’s a nice surprise to have after a disappointing day on Saturday [Finals Day].”

While Brown’s 2019 season was slightly less eye-catching than his breakout campaign this year, he still ended the tournament with 17 wickets at an impressive economy rate of 8.12. He again shone on Finals Day, with a combined return of 3 for 49 from his eight overs across the semi-final and the final, despite Worcestershire eventual last-ball defeat to Essex.

Brown’s temperament was particularly notable – he exchanged glares Dan Christian in the semi-final after dismissing him, and didn’t celebrate after dismissing Paul Walter in the 19th over of the final – and Smith told him that his manner was an important part of the decision to call him up.

“Ed basically said that they were really impressed with my skills, but also my manner, in terms of how I’ve dealt with the pressure in certain situations,” Brown said, “and being in control, not rushing things, making sure I do what I want to do, and having real clarity in what I’m doing. “He said that was impressive, and that it gives off a good image of being in control.”

Brown suggested that his battle with Christian on Saturday had been “blown out of proportion,” and that he hadn’t been helped by the TV cameras.

“The cameras made it look worse,” he said. “I celebrated, like, ten yards away from him, but the angle made it look like it was right next to him. I let out quite a roar, and I think he thought I was getting in his face or something, so he had a word with me when he went off. That’s why we were looking at each other, but he was really nice afterwards and said congrats – there was nothing malicious in it at all.

“Looking at the day as a whole I’m quite pleased with it. Obviously when you lose the final, or lose any game really, you try and work out if there’s anything you could have done, but it’s just one of those things.”

Brown reflected that his penultimate ball – a knuckleball to Simon Harmer which went for four – was not the right option if he was “highly critical”.

“If I’m completely honest, in the penultimate over – when Harmer took me for four, that was quite a big moment in the game. I changed it to a knuckleball when I should have stuck with an offcutter, which had been working.

“But look, it’s hard to look back and think you could do something differently, because in that moment I thought it was the right thing to do, and Mo [captain Moeen Ali] agreed.”

Brown would have played in the Big Bash and the Bangladesh Premier League last season but for a stress fracture in his back, and was not far off being picked up in the IPL auction, and hopes to fit appearances on the franchise circuit into his schedule this winter.

“I’ve potentially got a Big Bash deal lined up, which is close to getting pushed over the line,” he said. “Before this news, I was looking at the T10, BPL, PSL, but I’m not sure what my schedule will look like now. I’ll wait and see.”