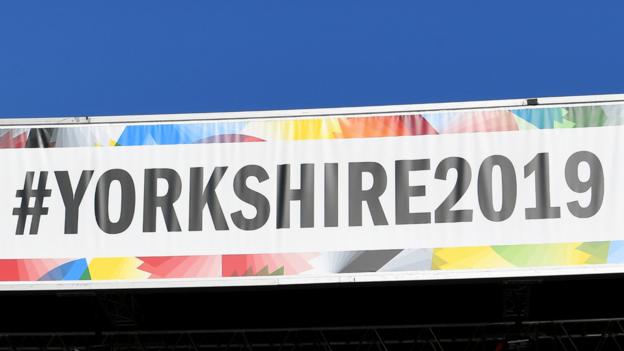 
Exciting racing, spectacular scenery and a carnival atmosphere – this week’s UCI Road World Championships in Yorkshire is a cycling extravaganza that is set to deliver all three.

Will any other British riders follow them on to the podium, and who are the favourites to claim the coveted rainbow jerseys as winners of the elite road races and time-trials?

BBC commentator and former cycling star Chris Boardman gives his verdict on the main contenders, and explains why this is such a special setting for Britain to host the event for the first time since it was held at Goodwood in 1982.

The world will be watching – 250 million set to tune in

This is not the first time top-level cycling has come to Yorkshire – an estimated 2.5 million people lined the roads when the Tour de France Grand Depart came to the county in 2014.

Five years on, the appetite for the sport in the region has definitely not diminished, with thousands of spectators at the Yorkshire Para-cycling International on Saturday – and the world will be watching on again for the rest of the week too.

“I was working on the coverage of the Tour in 2014 and the crowds were 10-deep here on the side of the roads,” Boardman explains from the spa town of Harrogate, where there is a circuit that will host all the race finishes.

“It was an incredible experience. We were just shell-shocked, and so were the Tour’s organisers. They weren’t expecting it and we had never seen anything like it, and that includes Paris for the finish or anywhere else in France.

“I thought it would be a one-off, so they should leave it alone – then they started the Tour de Yorkshire in 2015. That was successful, so they did it again, and again… and it has stuck.

“I am not quite sure why it works so well here. Obviously you have got great countryside, but there is some kind of amalgamation of other ingredients and then everyone in the local councils and communities are so proud of it, even if they have got nothing to do with cycling, that they put on a superb show.

“More than 250 million people are expected to watch this event around the world, and that is what is great for Yorkshire.

“The way the courses are laid out, we have got starts in 10 different towns and cities around the region, including the Para-cycling, under-23 and junior events.

“Yorkshire is the largest county in the country but this event shows it all off – and the place is buzzing already.”

As well as a warm welcome, Yorkshire offers some testing terrain too – particularly for the elite road races.

On Saturday, the 150km women’s race leaves Bradford and features tough climbs up Norwood Edge and Lofthouse, before ending with three 14km circuits of Harrogate.

At 285km Sunday’s men’s race is the longest at a World Championships since 1976, and mirrors most of the first stage of the 2014 Tour de France for the first 185km of its route, which is lumpy to say the least.

It sees the riders leave Leeds and climb up Cray, Buttertubs – where 10,000 spectators watched the Tour – and Grinton, before heading south for seven laps of Harrogate.

That could mean upwards of seven hours in the saddle, if they make it to the finish.

“People always look for where the really big climbs are but they might not realise how tough the roads are here generally,” adds Boardman.

“The terrain is really energy sapping because there is not a lot of flat, it is all up or down, so quite tough. And the climbs that there are, they are significant and they are early.

“Motivation is going to be key here for a lot of the field, because of the length of the races and the time of the year – it is near the end of the season – and if the weather turns nasty at all then that motivation is kind of doubled as a factor.

“The difficulty of the route means teams and their tactics are going to be important, because the terrain will break up the race early on, and then somebody has got to control it.

“Certainly in the women’s race, the strength in depth is not there for anyone to just shut down the race and wait for the circuit. Breaks could go – and stay away.

“At last year’s World Championships, in Innsbruck, there were really significant climbs on the finishing circuit, which meant everyone was focused on who could do what in the last 10 minutes of the race.

“This time, different tests are spread across the day and you could win in several different ways.”

We don’t know what the weather has in store for the riders, but at least Britain’s Lizzie Deignan will be guaranteed local support.

The 2015 world champion, who has returned to racing after the birth of her daughter Orla in September 2018, is chasing another rainbow jersey in the women’s road race – which passes through her home town of Otley.

“I think Lizzie has got a different perspective on life in general now,” says Boardman. “She has come back to the sport and is enjoying herself.

“I hope she can carry on that very positive outlook this week, because everyone is talking about her – she is the British hope for the week, to be honest, in terms of our riders who are considered to be among the favourites anyway.

“Winning will certainly be a challenge but it is not insurmountable for her. Lizzie is tactically smart, so she has a chance.

“Her problem in taking on the Dutch team – who are are the big favourites – is that they can win the race with several different people, and she cannot mark all of them.

“Three-time world champion Marianne Vos is back on form, then there is Chantal Blaak and Anna van der Breggen, winners in 2017 and 2018, plus double world-time trial champion Annemiek van Vleuten. They will keep trying to isolate Lizzie.

“If there were more climbs, that would help her whittle down the group but they are so early, it is going to be difficult for her.

“However, the fact these are her home roads – literally where she grew up in her case – could have the kind of impact that is hard to measure. You often only get one go at something like this in your career, and this is her moment.”

Can Swift use his home advantage?

Four-time Tour de France winner Chris Froome is injured and among the top riders missing from the men’s road race, with Egan Bernal and Vincenzo Nibali opting out.

And while 2018 Tour winner Geraint Thomas is in Britain’s six-man squad, he has admitted he is ‘not in good enough shape’ physically and has already pulled out of the time trial.

So, Britain’s best chance of a first male world champion since Mark Cavendish in 2011 lies with Doncaster’s Ben Swift who, like Deignan, will be riding on familiar roads.

Swift has a good record in one-day classic races that offer a similar test to the Yorkshire route, but Boardman feels it will be much harder for him to get near a medal here.

“Ben is a bit of an outsider,” says Boardman. “His form is coming on nicely since he returned from a bad crash and he won the national road race title in June, but it is fair to say he is up against it.

“One way he is in a better position than Lizzie, though, is that nobody will be expecting him to do anything.

“They won’t be expecting Britain to control the race and Ben can utilise other riders who might try to keep everyone together, but it is going to be tough for him to be in touch when he gets to Harrogate to start the circuit.”

Who is on the right form trajectory?

It is not just a case of looking towards the biggest names when you try to predict who will cross the line first in the men’s road race.

“As usual there are upwards of 10 possible winners,” says Boardman.

“To try to make the right call, you have to look at their physiological and psychological profile and see who is on an upward or downward trajectory of form.

“So, although you might look at France’s Julian Alaphilippe and think this is a good course for him, since the Tour de France ended (in July) he has been quiet and this has been a long year for him.

“Last year’s winner, Spain’s Alejandro Valverde, is an obvious contender. The finishing circuit is not as tough as he might like but he is just so frighteningly consistent.

“But I think Ireland’s Sam Bennett is someone to keep an eye on. He is enjoying a real breakthrough year and as well as being a fantastic sprinter he is light enough at 69kg to cope with the climbs.

“And of course you have got to consider Mathieu van der Poel, who dominated the Tour of Britain. He is just a phenomenon and also has form at the right time of the year.

“That is the over-riding factor in the elite time trial too. At his best, Geraint Thomas would have had a real chance in the men’s race, but he knows he is a long way off that so is not even taking part.

“When I was riding in the time trial, the World Championships were in August and you had the best riders coming out of the Tour de France in the best form.

“It is often the case now that you get the best riders left standing, so it is not quite the battle you want to see – but the fact it is so open makes things very interesting in the men’s and women’s events.”