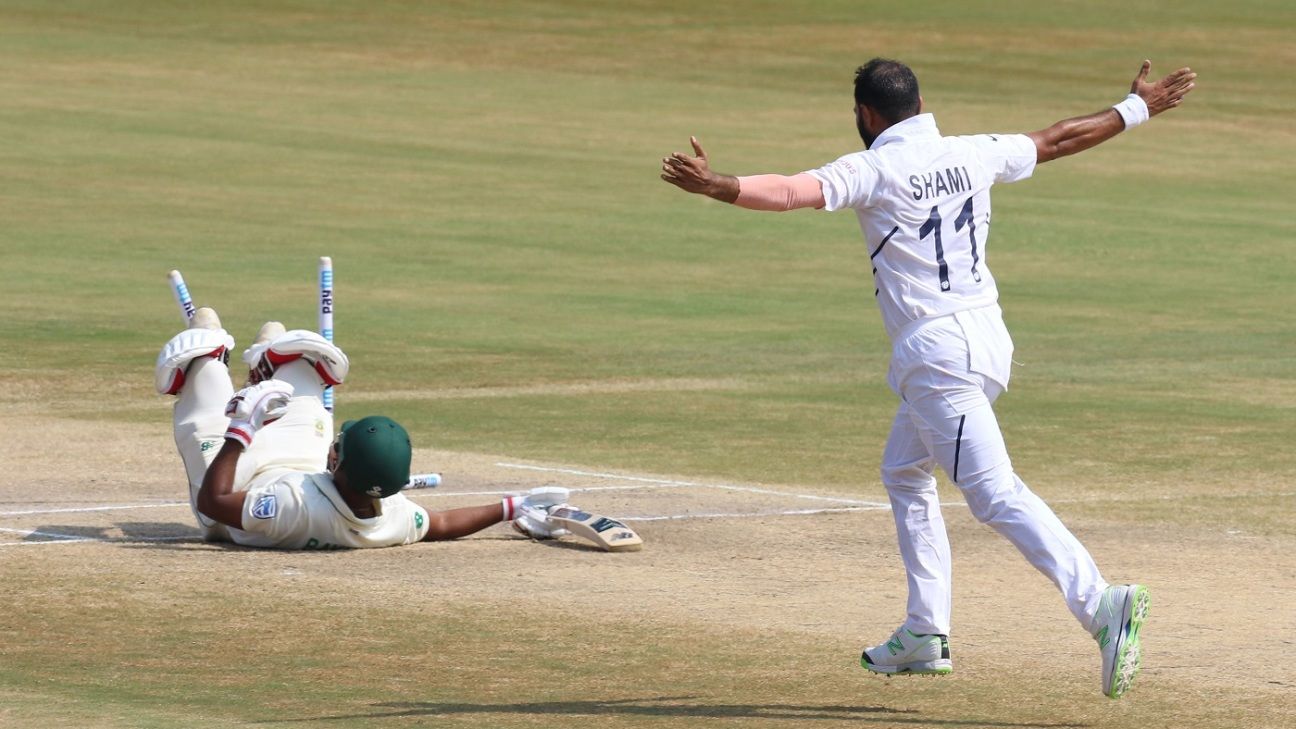 
Left to him, Virat Kohli would give teams extra points for away wins in the World Test Championship. On the eve of India’s second Test against South Africa in Pune, Kohli said that the arrival of the championship had encouraged teams to play positive cricket, and given them the incentive to go for wins when they might have earlier settled for draws. But he did hope there would be one change in the points system, perhaps when the next edition of the championship rolls around.

India v South Africa is available in the US on Hotstar and ESPN+. Subscribe to ESPN+ and tune in to the three Tests.

“The importance of every game has become that much more,” Kohli said in a press conference. “In situations that, in a three-match series, you probably would have played out a draw, teams are going to go for wins and get those extra points, so I think it’s great for Test cricket. The matches are going to be that much more exciting, is what we feel, and we can already experience that.

“We have to be absolutely professional in every session that we play, so yeah, I think it’s much more demanding on the players now, which is a good thing because it will keep the standard of Test cricket high. Yeah, these are the only things we have experienced so far and noticed in terms of changes.

ALSO READ: The mystery of the Pune pitch

“If you’d have asked me to make the points table, I would give double the points for an away Test win. That is something that I would have definitely liked to see. Maybe after the first edition.”

Visiting teams in India would certainly appreciate that extra incentive. India have been an incredibly difficult team to beat in their own backyard during Kohli’s time as captain, India winning 16 of their 22 Tests and losing just one. For all that, though, Kohli said conditions in India are often difficult to negotiate even for his team.

“Look, it’s not easy for us as a home side as well,” Kohli said. “When conditions are challenging, when the ball’s spinning, we’ve also found it difficult in the past. But we’re a team that looks for answers, not excuses, so maybe that’s the reason we keep improving, and we’ve been able to win so many Test matches.

“Come on, give the guy a break now. He’s done well, let him enjoy his batting at the top of the order, let him just have fun, like he does in white-ball cricket, and stop focusing on what’s Rohit going to do in Tests”

“We don’t take anything for granted for sure, we can very well be losing four-five wickets a session, so we know that well, as a team. We work pretty hard on our game also, even though we play in our own conditions and we’ve grown up playing in these conditions. So I think the mindset is key for us, and that’s to win every game that we play and not focus on what the conditions are on display, we look to find answers rather than excuses.”

Over the first three days of the first Test in Visakhapatnam, South Africa pushed India hard to find these answers, particularly with their aggressive batting approach against spin, which helped them claw back from 39 for 3 to finish just 71 short of India’s first-innings total of 502.

Kohli wasn’t surprised by the fight South Africa put up.

“How they played in the first innings was very good,” he said. “You have to be positive when the wicket’s nice and easy to bat on, you have to try and get as many runs as possible, and that’s exactly what they did.

“I would say the first three, maybe even four days of the game, the wicket was hardly doing anything. After three-and-a-half days, it started to turn a little bit, and then on day five we really got into our own. We expected that. We expected teams to come out and try and be positive against us, and we held our own. We held our own in the second innings, and put up 400 runs for them to gun down again.

“Look, we are going to be put under pressure, even though we’re playing at home. Its about how we come back into the game and then put double the pressure on the opposition again and then tell them, let’s see if that can be executed again. So that’s basically what Test cricket is. You have to come back in the second innings and do the job again, it doesn’t end in one innings, but the approach was quite expected.”

On the final day, India’s match-winner was Mohammed Shami, who came into his own on a wearing fifth-day pitch to run through South Africa in their second innings. What sets Shami apart, according to Kohli, is how much help he can coax out of even the flattest surfaces.

“I think on the pitches that we play, I haven’t seen anyone get so much seam movement apart from him,” Kohli said. “Yes, internationally, many bowlers do, but I think on flat pitches he has the ability to pick you wickets in situations that feel absolutely dead. And that’s why he’s such an important bowler for us, that’s why we’ve wanted to manage his workload very precisely – all the fast bowlers.

“But he’s someone who can change the complexion of the game totally when you don’t see it coming. That’s the kind of skill he possesses, and now he’s taking the responsibility. We don’t need to push Shami anymore. We don’t need to tell him, come on, you’ve got to get up and bowl this spell for us. He wants the ball. He understands the situation. When he’s given the ball, especially in the second innings when situations are difficult, he comes in and does the job every time.

“It’s great. People are taking responsibility in different situations in the game, which is amazing to see and his skill is obviously there for everyone to see, it’s not a surprise anymore to all of us that he gets the ball to do that much more than others in conditions that don’t really offer you much. He’s blessed with that skill naturally, but it’s the mindset that’s changed now. According to me he’s in the best space right now.”

India’s other hero in Visakhapatnam was Rohit Sharma, who scored centuries in both innings while opening the batting for the first time in Test cricket. That performance, Kohli felt, should end the debate over Rohit’s place in the team.

“It’s overflowing. It’s not been filled,” Kohli said, when asked if the opening slots were taken for the foreseeable future. “Come on, give the guy a break now. He’s done well, let him enjoy his batting at the top of the order, let him just have fun, like he does in white-ball cricket, and stop focusing on what’s Rohit going to do in Tests.

“He’s in a great space, he’s playing really well, and he looked relaxed in the first game, which is great to see, all the experience he’s accumulated over the years came to the fore, so he’s feeling absolutely at home at the top of the order, and for us as a team it’s a huge bonus, because if you saw the second innings, the way he’s able to take the tempo of the game forward, that allows the bowlers an extra hour and a half or two hours to bowl the opposition out.

“So look, if a guy like him at the top of the order plays the way he did in the last game, we’re going to be in situations to go for victories in most of the Test matches. We’re all very happy for him, and I think it’s time to just move ahead from [debating about] his spot at the top of the order and just let him enjoy his batting.”

The Pune pitch had a fair grass cover on the eve of the Test match, and a certain amount of early moisture is expected too, given the volume of rain the city has experienced over the past week or so. Despite this, Kohli seemed to suggest that India would probably stick with an attack containing two seamers and two spinners, and not play the extra fast bowler.

“Well, I think more or less our team is settled,” he said. “I don’t think it’s going to play that big a factor because when the pitch is damp it turns as well, so it’s not like only seamers are predominantly going to be effective on this pitch, all five days. Everyone will have to play their roles.

“Unless you have a pitch which has total grass coverage, only then you think of changes in combination for the match. Because you do know that it’s going to dry out at some stage, and you can’t go predominantly one-sided in your attack and then not have the balance. “We are pretty balanced in our team composition, and if any changes need to be made looking at how the pitch might behave on the first three days, then we’ll do so, but we don’t see any major things to think about, looking at the pitch.”