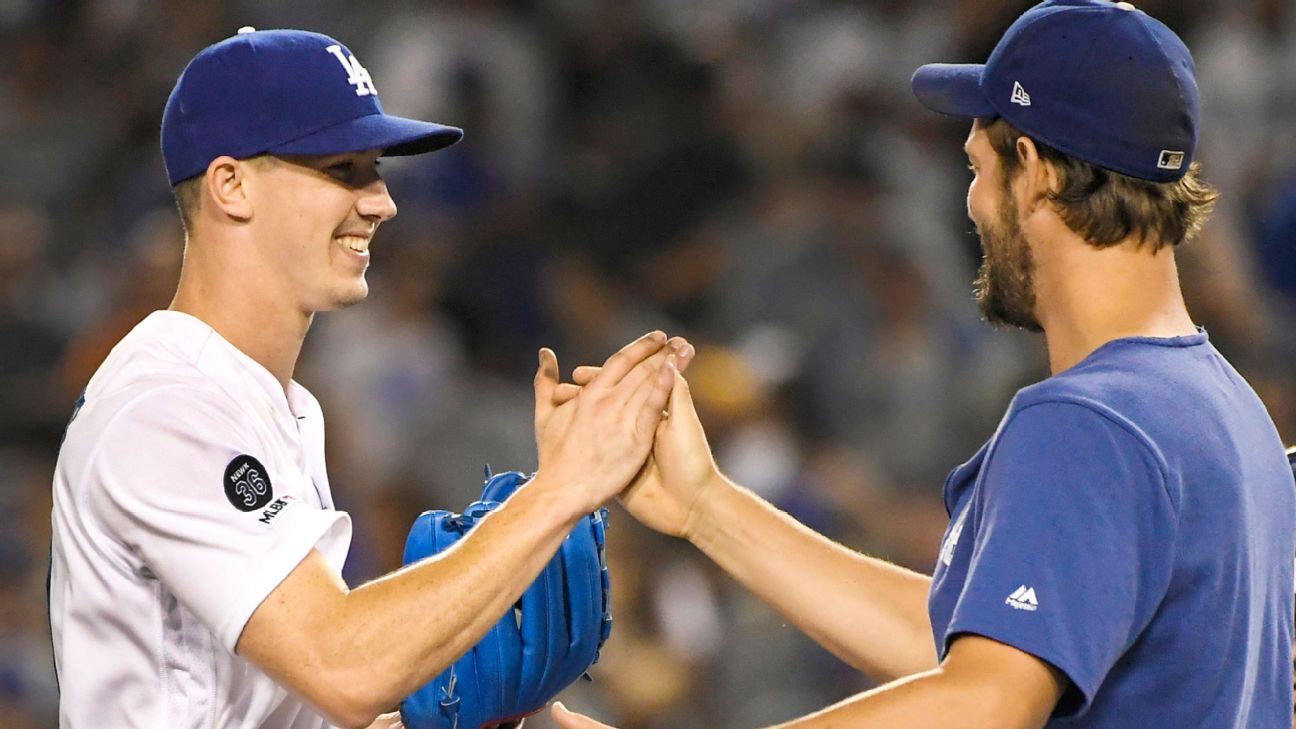 
LOS ANGELES — Walker Buehler‘s bravado is as discernible as it is distinguished — but his first two encounters with Clayton Kershaw made him uncommonly uneasy.

The first took place in the summer of 2015, shortly after the Los Angeles Dodgers selected him in the first round, when Buehler paid his first visit to Dodger Stadium. It just so happened to coincide with Kershaw’s start day. Buehler already knew about Kershaw’s uncompromising routine. He made it a point to distance himself, but he still felt consumed by it.

“I remember not wanting to be in the way,” Buehler said, “and feeling like I was in the way, even though I was on the other end of the dugout.”

The second occurred late in the 2017 season, during Buehler’s first day as a major leaguer. Buehler, then only 23, formally introduced himself to Kershaw and instantly felt self-conscious. He later overanalyzed every aspect of their short interaction.

“You don’t even feel yourself speaking,” Buehler said. “He’s so well-known and so respected that you just don’t want him not to like you.”

Buehler and Kershaw will probably both pitch in the fifth and final game of this National League Division Series on Wednesday, a make-or-break affair that begins with the first pitch at 8:37 p.m. ET on TBS. Buehler will start — opposing Washington Nationals dynamo Stephen Strasburg — and Kershaw is expected to follow him out of the bullpen, symbolizing what has been a gradual-yet-obvious changing of the guard atop the Dodgers’ rotation.

Over the past couple of years, while Buehler established himself among the game’s most electrifying pitchers and Kershaw transitioned into the back half of his career, the two forged a mutually beneficial relationship.

Kershaw, 31, and Buehler, 25, are separated by six years, a relatively small gap that can at times feel like a lifetime in this era. Kershaw came up in an age that suddenly feels antiquated, when terms such as “small ball” and “feel” were still pillars of the sport’s vernacular. Buehler, the product of a progressive pitching program at Vanderbilt University, is rising at a time when advanced analytics are dominating the industry. Buehler’s embrace of information has piqued Kershaw’s interest; Kershaw’s old-school values have influenced Buehler.

“A lot of times, they challenge each other,” Dodgers manager Dave Roberts said. “It’s forced them both to grow.”

Buehler is effusive in his praise of Kershaw, both of his continued success and of his unwavering process. But he is also resolute in carving out his own identity. Buehler can be brash and assertive, but he is surprisingly self-aware and pragmatic. He sat in the dugout as the 2019 regular season was winding down and talked about how he isn’t necessarily in awe of Kershaw, but he is driven by the prospect of someday residing on equal footing. Buehler sees Kershaw as his peer, perhaps not unlike the way Kobe Bryant used to view Michael Jordan.

From the wild-card game through the World Series, we’ve got it all covered. Complete coverage

“I think people can be critical of somebody saying that, obviously. I’m in my second full year in the major leagues, and that guy’s won more Cy Youngs than I have seasons,” Buehler said. “But at the same time, he was 25 years old once, too. I think that’s what younger guys have a tough time with. Michael Jordan was a 21-year-old, too, you know? I just think about it that way and try to progress at the level I can and do what I can. And if you can help me move forward, that’s fantastic. But I’m not just going to emulate everything someone else did and expect to become who they are. I don’t think that’s how the world works. You can’t just copy everything Apple does, right, and expect to be Apple.”

The Dodgers instantly saw the makings of a potential star in Buehler. They made him a September call-up only 14 months after he returned from his post-draft Tommy John surgery, then arranged for him to spend some offseason time in Dallas working out with Kershaw. Watching Kershaw, the Dodgers believed, would set a new bar for Buehler’s regimen.

Buehler was impressed, but he quickly learned that emulating the sheer volume of Kershaw’s weightlifting sessions would not work for him. Instead, he came to view the experience as an opportunity to interact with the three-time Cy Young Award winner on a more personal level. Buehler didn’t incorporate any new methods into his routine, but in Kershaw, he saw a model for consistency and intensity with the mundane tasks that are often taken for granted.

“I just think being around a guy like that does nothing but help you,” Buehler said. “If you’re not a baseball player — if you’re just an average, normal person, working a job — being around Clayton Kershaw makes you a better person. Just learning to be a professional baseball player from him is the next step in that process.”

Buehler and Kershaw slowly got to know each other throughout the 2018 season, as Buehler’s ascendance made him worthy of starting the divisional tiebreaker and Game 7 of the NL Championship Series. Over the course of the year, amid a season that saw them combine for a 30-9 record and a 3.14 ERA in 360 2/3 innings, they grew closer.

Kershaw has admitted to going a little more out of his way to mentor young players in recent years, and Roberts has noticed him spending more one-on-one time with teammates. But it isn’t specific to Buehler. They aren’t constantly grabbing dinner on the road or sharing trade secrets to which others aren’t privy. It’s a casual friendship that has developed organically, one of several within a Dodgers clubhouse that has seamlessly blended older players with younger ones.

“This forced heir, forced mentee thing — I think it’s all silly,” Buehler said. “I’m 25 years old. I’m not 16 looking for, like, a second father figure. I enjoy being around Clayton. I feel very lucky to be a Los Angeles Dodger and have him as a teammate. But he’s not, like, a dad to me. It’s just not how it’s gonna happen. We’re teammates.”

Kershaw bought Buehler a suit for the All-Star Game’s red-carpet ceremony this past summer. When the entire team dressed in elaborate costume near the end of the regular season, Kershaw and Buehler collaborated on a “Zoolander” theme. Most of their dialogue, however, has taken place in the dugout while others are pitching. Kershaw has helped Buehler become more intent about scouting opponents, which helped Buehler pitch with more conviction this season. Through Buehler, Kershaw has become more fluent in analytics, which accelerated his evolution.

“Walker doesn’t need a lot of help, you know,” Kershaw said. “He probably knows more about pitching than I do, just in terms of the mechanics part of it and the process of how to create velocity or how to create spin, all this stuff. He’s probably, I guess you could say, a little more new-age than I am. I like listening to him. I like learning from him.”

Buehler is a 25-year-old, unmarried right-hander with an explosive fastball. Kershaw is a 31-year-old, married father of two who now relies heavily on breaking pitches. Kershaw has long been considered the second coming of Sandy Koufax, whereas Buehler seems to more closely resemble the next Justin Verlander. It’s a connection that wouldn’t exist without the forced relationships of team sports but one that has nonetheless become fruitful.

Kershaw has been among several Dodgers veterans who have been disarmed by Buehler’s candidness and arrogance.

He has come to find him endearing.

“He grows on you,” Kershaw said. “He kind of wears you down.”

They’re each tasked with ensuring that this dream season — of 106 regular-season victories, 12 walk-offs and 279 home runs — continues into the next round. It’ll be up to Buehler and Kershaw to outduel Strasburg — and potentially Patrick Corbin — and tame the potent bats of Anthony Rendon and Juan Soto.

Buehler will start, but Kershaw will be waiting, eager to help if needed.

It has become a theme.

“He’s there to kind of be an ear,” Buehler said, “and at the same time just tell you you’re being an idiot.”