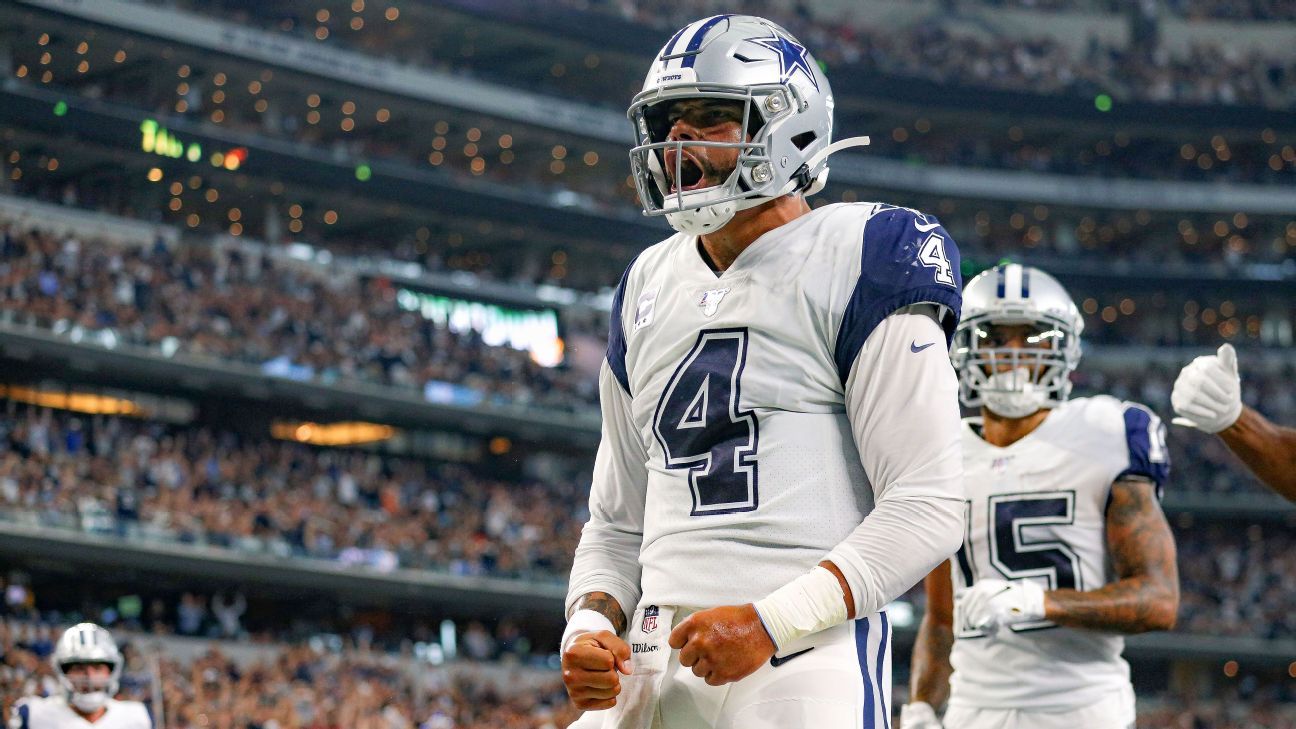 
FRISCO, Texas — Dak Prescott‘s start to the Dallas Cowboys‘ 2019 season has been all things to all people.

If you believe Prescott can be one of the elite quarterbacks in the NFL, you can point to his three-game start against the New York Giants, Washington Redskins and Miami Dolphins in which he had nine touchdowns and two interceptions and the Cowboys scored at least 31 points and had more than 400 yards total offense.

If you believe Prescott is more of a game manager than a difference-maker, you can point to his past two games against the New Orleans Saints and Green Bay Packers in which he had four interceptions and two losses.

All of this makes the ongoing contract negotiations with Prescott, 26, an interesting topic. The Cowboys initially wanted to get a long-term deal done with the fourth-year QB in the spring. Then it was before training camp in Oxnard, California. Then it was during camp and finally before the regular season began on Sept. 5.

Here it is Week 6 and there’s no deal.

The Cowboys are open for business, as executive vice president Stephen Jones likes to say, but if Prescott is going to be patient, then the Cowboys can be patient, too. Both sides want the same thing: a long-term agreement.

But the lack of a deal as of Oct. 9 has brought up some key questions:

Why isn’t a deal done and why have the Cowboys waited?

The easy answer is something Stephen Jones says all the time on deals of this magnitude: It takes two sides.

It’s not that Prescott’s representatives don’t want to work out a deal. They want to execute the right deal for their client that will maximize his earning potential. That’s their job. The Cowboys’ job is to work things within a salary-cap model (more on this later), thinking about not only this season but also three and four years down the road.

Dallas has wanted to get a deal done since the offseason. Recent deals — such as the Seahawks’ Russell Wilson ($35 million), the Rams’ Jared Goff ($33.5 million) and the Eagles’ Carson Wentz ($32 million) — have set the market since the Cowboys and Prescott started talks. Wilson has won a Super Bowl and taken the Seahawks to a second title game. Goff has taken the Rams to a Super Bowl. Wentz was having an MVP-type season in 2017 before getting hurt, but the Eagles won the Super Bowl anyway.

Negotiations take time. Prescott is following his agent’s advice of being patient — even as guaranteed millions await.

Do the Cowboys still need be sold on Prescott?

No, they answered this question a long time ago. In training camp, the Cowboys offered Prescott a contract that would have paid him among the top-five quarterbacks in average per year ($30.5 million). In these kinds of deals, the devil is in the details, and we don’t know the breakdown of the bonus money or guaranteed money, whether it’s a full guarantee or for injury. If the Cowboys were willing to make that type of commitment earlier to Prescott, then they must be sold. Oh, and it is safe to assume the Cowboys have increased that offer they made back in training camp, too.

Have the Cowboys boxed themselves by re-signing La’el Collins, Jaylon Smith and Ezekiel Elliott before getting Prescott under contract?

Not really. As much as owner and general manager Jerry Jones likes to say there is less pie to go around, the Cowboys have had a minimum and maximum budget for Prescott all along. (And for wide receiver and free-agent-to-be Amari Cooper as well, for that matter.)

The Cowboys have plenty of salary-cap room. They have $24.7 million to spend and will carry over any unused cap space to 2020, according to ESPN Stats & Information. Using an adjusted salary cap of $200 million in 2020, ESPN Stats & Info projects the Cowboys to have $67.8 million in cap room even after those aforementioned deals.

Since the NFL’s collective bargaining agreement is set to expire after 2020, things can be tricky two years down the road, but considering how tied in Jerry Jones is to the negotiations with the NFL Players Association, you would think the Cowboys will be well-prepared to handle every scenario.

How much are Prescott’s endorsements and insurance policy that guarantee him $50 million affecting talks?

Clearly, that’s a part of this, although we don’t know the breakdown in how much he receives from the likes of Nicholas Air, Oikos, Pepsi, Frito Lay and the other deals he has. As for the insurance policy, he would get that money only if he is unable to play again. Prescott is already taking a financial risk because the Cowboys’ deal probably would guarantee him more millions whether he gets hurt or not.

What are some of the issues if there is a delay in a deal?

Guaranteed money. Maybe even the extension’s length. Average per year is a nice way to look at a deal but guaranteed money matters most. Let’s work off the Goff and Wentz deals for this answer. Since they were the top two picks in the 2016 NFL draft, the Rams and Eagles had both under the fifth-year option for 2020. Adding up that money and their 2019 pay, that figure was roughly $27 million. Goff has been guaranteed $110 million. Wentz has been guaranteed $107.9 million. An argument can be made that Goff’s actual guarantee on his new deal is $83 million and Wentz’s is $81 million.

Since Prescott is in the final year of his rookie deal as a fourth-round pick, making $2 million, there was no commitment for 2020, which makes it a little more difficult for the Cowboys to reach the nine-figure guarantees.

Difficult, but not impossible.

What happens if a deal with Prescott doesn’t get done?

During the Elliott contract talks, Jerry Jones asked: “When have I not gotten a deal done?”

That needs to be mentioned again when thinking about the answer to this question. But let’s play this out in the event the Cowboys and Prescott do not have an agreement in place by the time free agency begins in March.

The Cowboys will use the franchise tag on Prescott. They are not going to let him walk. Current projections for the quarterback franchise tag is around $27 million. 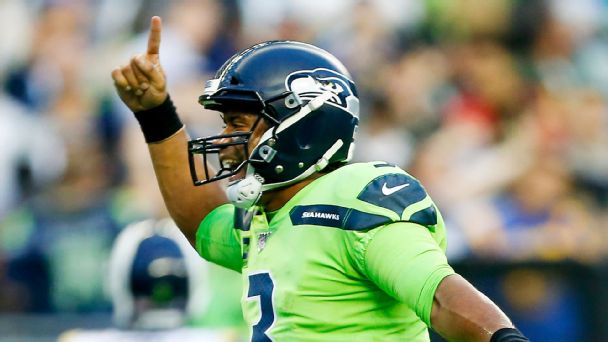 There is not a salary-cap issue for the Cowboys, but it opens up another set of issues:

• Will Prescott show up for the offseason program?

• Will this turn into another Kirk Cousins situation?

As the quarterback, Prescott knows the offseason is important to his development. As a businessman, the only leverage Prescott would have is not showing up.

The Redskins used the tag on Cousins for two straight years, setting the stage for him to leave after the 2017 season via free agency. There is a major difference between their situations. Washington was never completely sold on Cousins. The Cowboys are sold on Prescott.

A deal will get done. It’s just a matter of when. The Prescott believers will be happy; the Prescott doubters won’t.