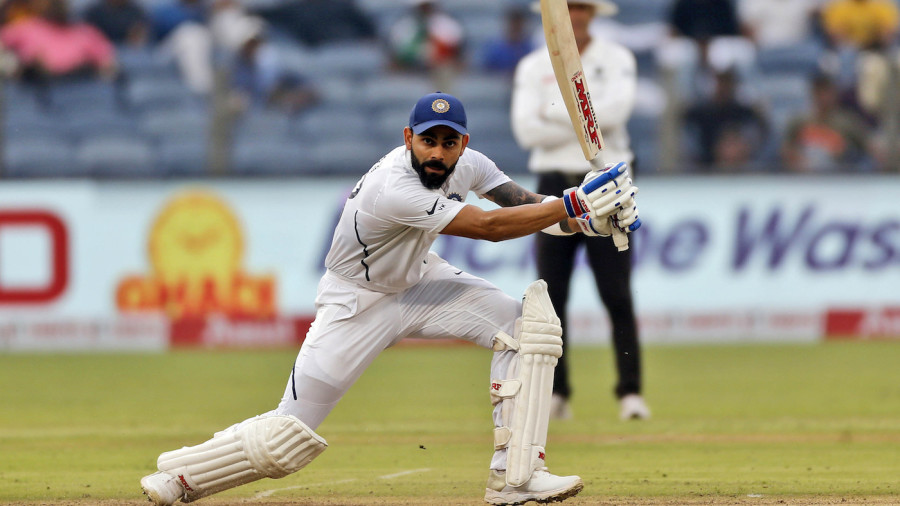 On day two of Test two, Virat Kohli and friends just stood there and beat every bit of fight out of a tattered and directionless South African side. Kohli could have chosen to bat on and have a stab at a triple, Ravindra Jadeja could have got a hundred had he not pushed too strongly towards a declaration, and then Umesh Yadav announced his comeback with two wickets in his first two overs.

India v South Africa is available in the US on Hotstar and ESPN+. Subscribe to ESPN+ and tune in to the Tests.

South Africa, meanwhile, dropped catches, misfielded regularly, conceded overthrows, snapped at each other, bowled 11 no-balls, and just waited for declaration. Oh and they also made strides towards having the worst series for a set of spinners in India, and none of their three fast bowlers charged in for the last 18 overs of the innings. Even when Keshav Maharaj was off the field with injury. Retirements, talent drain, relative quality of this South African side compared to their other teams are things beyond the scope of this report, but it is hard to remember an untidier effort from them in the field. Even the forecast rain refused to come to their rescue.

South Africa’s spinners now average 95; only two sides have ended a series with worse numbers in India. Maharaj has gone at 4.04 an over so far and has averaged 85.66, putting him in the worst five on both counts. While these are mid-series numbers, it will take some correcting to not walk away with dubious honours by the time Ranchi is done.

India’s honours were the farthest thing from dubious. Kohli was tested with the new ball in the first hour, but South Africa’s cordon didn’t help themselves by refusing to move closer. Thrice Kohli edged in the first exchange, but none of those went to hand. That South Africa could draw edges through traditional channel bowling tells you how sporting the pitch was. Kohli was less sporting whenever the bowlers erred, and they erred frequently. No matter how honest they kept him with length balls outside off, Kohli was brutal on any that were too full or too straight.

This was one of Kohli’s more difficult home hundreds. Only on a crazy seaming track in Kolkata, against Sri Lanka, did Kohli have a worse control percentage over his first 100 runs than the 87.86 here. He was respectful accordingly, even with debutant Anrich Nortje.

Ajinkya Rahane was less fluent with his ongoing struggles against spin. He took 33 balls to score his first run off Maharaj. To the first 100 runs of the 178-run partnership with Kohli, Rahane contributed just 25; he took 100 balls to do so. Against pace he opened up a little, but Maharaj dismissed him on 59.

Left-arm spin did come close to getting Kohli out: but three outside edges off Maharaj refused to go to Faf du Plessis at slip. This, though, happened well after he had reached his hundred and was now pushing for quicker runs. That was one of the reasons why Jadeja was promoted to No. 6, but Kohli was so dominating that Jadeja could score just six in the first 50 runs of the 225-run partnership.

Kohli was toying with the bowlers, and yet he didn’t resort to hitting the ball in the air. Soon he went past Steven Smith, Don Bradman and 7000 Test runs. The 7000th was also the run that brought up his seventh double-century. He was the fourth-fastest to the mark; also only three men have scored more doubles than him.

After Kohli reached his double, he and Jadeja unleashed mayhem. South Africa went to pieces. Amid overthrows and misfields, Rabada fielded a ball in his follow-through and threw it at the keeper. Quinton de Kock had his back at the throw, and all hell broke loose. A frustrated Rabada vented his anger and de Kock refused to take it lying down. Between overs, du Plessis had to physically push Rabada out of an altercation. Immediately Philander failed to bend to field a ball at mid-on.

Rabada didn’t bowl an over in the last 32, Nortje in the last 22, and Philander in the last 18. It was clear that fast bowlers were the only ones who could delay India’s declaration and thus leave a little less for their batsmen to do. In those 17.3 overs, India plundered 136 runs. One of those 11 no-balls brought a wicket in this period. du Plessis missed an edge too. India stole singles from under the fielders’ noses. South Africa had closed their eyes and were waiting for the nightmare to end. It momentarily did as Jadeja skied one on 91, bringing his average in declared innings down to 74.7.

The relief didn’t last as Yadav quickly showed South Africa’s fast bowlers how to bowl in helpful conditions in India. Skiddy, swinging and attacking the stumps, he had Aiden Markram lbw with the second ball he bowled. In his second over, he had Dean Elgar playing on. With his first ball in the match, Mohammed Shami got rid of Temba Bavuma. du Plessis sent Nortje out sa nightwatchman who survived the day but only just.