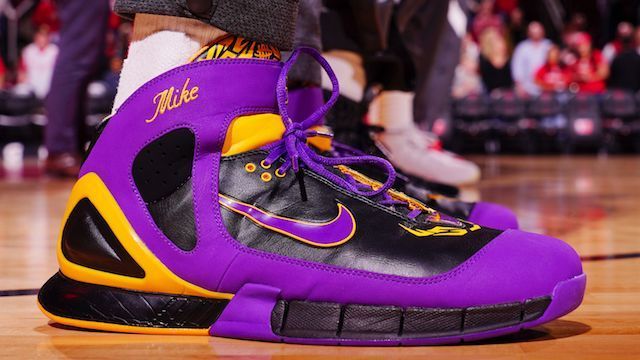 After a two-month stretch of testing out his sneaker free-agent status, PJ Tucker sorted through discussions with Puma, New Balance, Reebok, Nike and others to finally make a decision on his next endorsement deal.

“Through it all, one family has been consistent,” Tucker wrote in an Instagram announcement. “That’s why I’m happy to announce that I’m signing back with the Swoosh. Leaders of the old school and the new.”

Although other brands offered compelling multimillion dollar total deals and creative input for both on- and off-court products, Tucker’s longtime love for Nike couldn’t be topped.

“My taste in sneakers came from my experiences growing up,” he said. “I would literally get two pairs of shoes a year: for my birthday [in May] and to start school. That did two things. For one, it made me value each pair of shoes I got. I had to make sure they lasted as long as possible. But even more, it made me think nonstop about the shoes I wanted and it sort of made me an expert in what was hot and what was not.”

Tucker turned to one of his favorite Nike signature lines for his first game after re-signing with the brand, an exclusive 2005 edition of Kobe Bryant’s Huarache 2K5. Nearly 15 years ago, Nike held one of its first design contests at its Los Angeles Niketown store, with Bryant hand-picking four winners and wearing their designs during the 2005-06 season.

Tucker tracked down the black, purple and yellow pair designed by “Mike,” another pair in a long list of surprises from his closet. The only other known pair has been stashed for years by best-in-class collector Jay Jones, who posted all four of the fan-designed sneakers on Instagram, with a playful “Your move!” nudge to Tucker.

“Making it to the NBA sealed my fate. I was gonna get ’em all — and then some,” Tucker said. “Since then, I’ve worn shoes on the court that were worth so much, I wouldn’t dare tell my mom.”

With a new multiyear deal with the brand that should carry him through the remainder of his career, Tucker already has additional player exclusive colorways of upcoming Kobe Protro models on the way.

“Can’t wait to show you guys what we come up with,” he smiled.

Elsewhere in the league, players unveiled a mix of thoughtful tributes, festive themes and rare pairs. For his pro debut in his hometown of Toronto, New York Knicks rookie RJ Barrett had a custom pair by artist Sierato in the works.

Highlighted by a series of maple leaves along the main panel of his Puma Clyde Hardwoods, the Toronto skyline could be seen on the inner left collar, with “MADE IN CANADA” depicted on the opposite shoe.

Though overt sneaker theme weeks might have waned now that players can wear sneakers of any color on any night, Blazers combo guard CJ McCollum still looked to serve up a spirited pair for Thanksgiving. With a two-tone brown upper, his latest Li-Nings feature a multicolored midsole wedge inspired by some of McCollum’s favorite dishes, along with a heel counter highlighted by a series of turkey, veggie and wine icons.

Been admiring @CJMcCollum‘s stable of @LiNingHoops Speed VI Premium lately, but this “Thanksgiving” colorway takes the spice carrot cake. I will buy any sneaker with food icons. pic.twitter.com/RIZsdTMLyQ

Once his mid-June trade to the Utah Jazz had been completed, Mike Conley Jr.’s sneakers were set to get a new look after he had spent his entire career suiting up for the Memphis Grizzlies. In the months leading up to the regular season, Jordan Brand crafted a batch of player exclusive colorways for the typically reserved Conley. His loudest pair yet, a bold yellow and navy edition of the Air Jordan 34, also features “Roaring ’20s” artwork along the heel, a nod to the starting points of jazz music.

Brandon Ingram looked to continue his link to Adidas’ past, breaking out the most recent edition of Tracy McGrady’s ongoing signature line. The mismatched red and blue T-Mac Millennium drew inspiration from the Hall of Fame scorer’s sneakers at the 2004 All-Star Game. While enjoying his breakout season, Ingram’s 25.9 points per game currently rank ninth in the NBA, as he hopes to soon make his own All-Star Game imprint.

With the Miami Heat debuting their latest “Vice” uniforms, newcomer Jimmy Butler did his best to pull out a pair to go along with the team’s unique laser fuchsia and blue gale hues. His Jordan Supreme Elevation exclusive was originally made last season for Black History Month, but fit in just fine for a Miami home win in their new much-loved look.

Check out each of the best sneakers worn in the association this week and be sure to vote on your favorite pair in our poll below. For real-time updates on sneaker culture and NBA kicks, follow @SneakerCenter on Instagram.