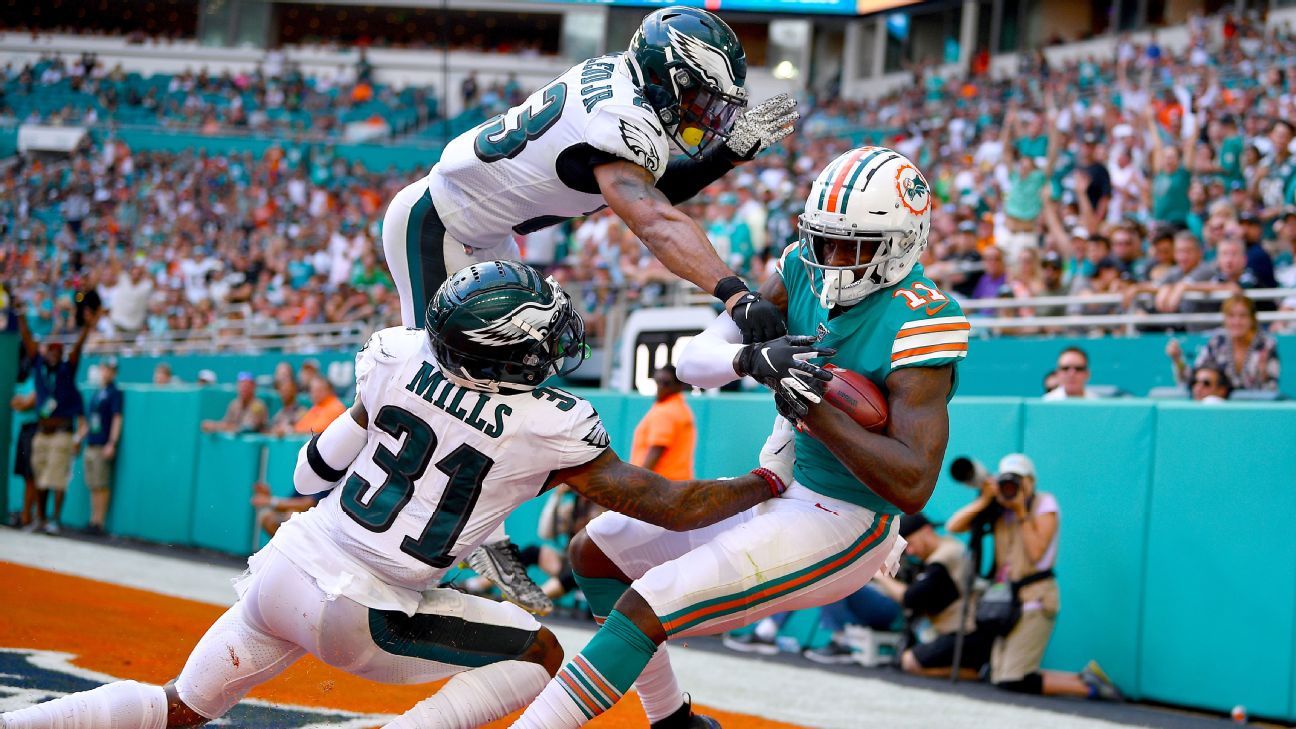 
MIAMI GARDENS, Fla. — While rocking their sweet throwback uniforms, the Miami Dolphins provided a good taste of what’s to come under coach Brian Flores with a 37-31 upset victory over the Philadelphia Eagles.

The Dolphins once again showed that despite being a little short on talent, they lack nothing in fight. They shockingly exposed the playoff-contending Eagles (5-7) thanks to some tricky creativity from their punter and kicker, a career day from receiver DeVante Parker and a magnificent outing from veteran journeyman quarterback Ryan Fitzpatrick.

At 3-9, the Dolphins aren’t headed to the playoffs. But it’s hard to believe that any other NFL team had a more joyous Sunday than Miami. The Dolphins don’t quit, and in doing so, they show that a turnaround is happening.

Parker had a career-high 159 receiving yards, including several Randy Moss-like grabs snatching a 50-50 ball away a defender, and two touchdowns. In his breakout season, Parker has already reached a career high in receiving yards and touchdowns.

Describe the game in two words. Shocking thrill. The Dolphins were down 28-14 in the third quarter with the Eagles possessing control of the game, but the thrill was just beginning as Fitzpatrick led Miami’s offense down the field for four consecutive scoring drives (three touchdowns, one field goal) — tearing apart the Eagles’ secondary.

The last time the Eagles lost when leading by 14 points in a game was 2018’s Week 7 against the Carolina Panthers. It was a shock that the Dolphins, whom many mocked as tanking in recent months, were the team to hunt the Eagles down.

Pivotal play: On fourth-and-goal and down 13-7 in the second quarter, the Dolphins sent their field goal team out but audibled from their traditional formation into a unique formation with center Daniel Kilgore snapping to punt Matt Haack in a shotgun formation. The other nine players split wide on either side. When the ball was snapped, Haack scrambled to his left and Sanders slid behind the defense in the end zone. Haack pitched a shovel pass to Sanders, who slid to the ground and caught the touchdown.

It was a play-of-the-season candidate that pumped up the Dolphins and kept them in the game early. It was the type of creative trickery that gave the team the belief that it could pull off this win.

QB breakdown: Fitzpatrick threw for a season-high 365 passing yards and led the Dolphins to 23 consecutive points in the second half. His performance made it clear why Flores chose to go with Fitzpatrick over young Josh Rosen as the team’s starting quarterback.

This Dolphins team plays hard for Fitzpatrick as well as for Flores. No matter who the future quarterback is in Miami, the Fitzpatrick-bridge era made some memories on Sunday.

What makes Parker such a hard cover is that even when he’s covered, he can find ways to go up and make plays on the ball. The Dolphins should be excited about Parker and what he means for this team going forward.

Stephen Fulton ruled out of title fight after testing positive for COVID-19
Arizona Cardinals’ DeAndre Hopkins expects relationship with Kyler Murray to flourish
The PGA Championship — Everything you need to know for golf’s first major of 2020
Terence Crawford, Manny Pacquiao bout far from a done deal
How young cancer survivors are bringing some style to the PGA Tour