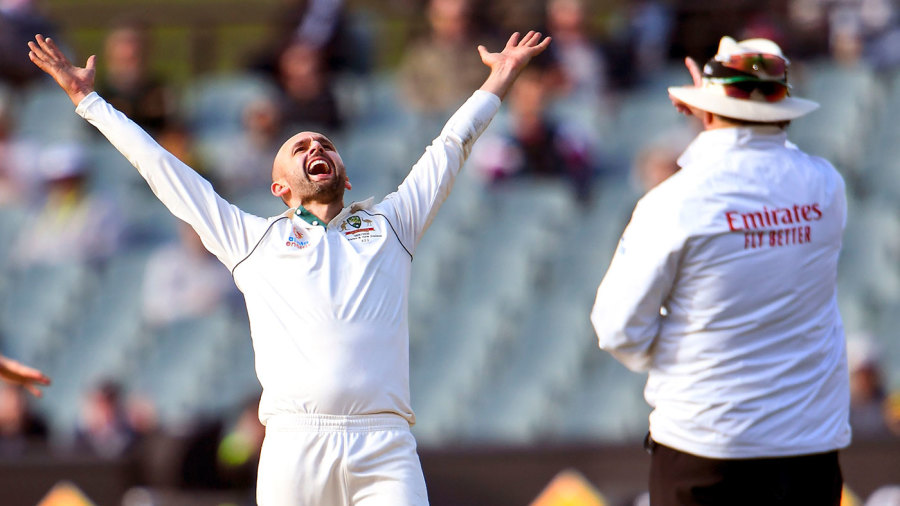 There was resistance, as there had been before, but it came when the game was so far beyond saving it seemed futile. Pakistan went right through to the final session before Australia finally wore them down and succumbed to another convincing innings defeat. A few positives aside, this really has been a bleak series for the visitors.

Nathan Lyon enjoyed a bit of personal glory, completing his first five-wicket haul against Pakistan. It will do his confidence much good, given the offspinner’s rather ordinary numbers against this particular opposition, and in a contest where every one of Australia’s bowlers enjoyed great success, they couldn’t have hoped for a better launch pad to the three-match series against New Zealand later this month.

Shan Masood and Asad Shafiq began the day simply hoping to take the Test as deep as was possible, and the early signs weren’t terrible. In the day time the pitch flattened out and once the batsmen got themselves in the runs even began to flow. Once again, however, it highlighted the struggles of Pakistan in the evening session, which had yesterday seen three of their top-order batsmen off before the innings properly got going. It was a similar pattern as the first innings, where the night session saw Pakistan lose more than half their side before the Yasir Shah and Babar Azam rearguard.

Masood, in particular, combined patience with belligerence early on, consecutive boundaries off Micthell Starc demonstrating the intent he harboured. He used his feet against Lyon to deposit him over long-on, trying to work himself back to form after at testing series. Shafiq looked almost completely untroubled, and in those moments, there might even have been hope Pakistan would make Australia bat once more. When the partnership moved past hundred and both men brought up their half-centuries radio commentary in Pakistan even mooted the possibility of a final day smash and grab.

But hope to Pakistan is like locusts to agricultural farmers; they never comfortable allowing it to proliferate. The extermination began when Masood danced down to Lyon and, failing to get to the pitch of the delivery, spooned the simplest chance to mid-off. Shafiq, meanwhile, has mastered the art of scoring pretty but ultimately meaningless runs; he’s made a successful career out of it. He ensured there would be no departure from that script, and for good measure even ensured he’d get out in the most Shafiq way possible, flicking a catch to leg slip off Lyon. That fielder had been exclusively placed for that shot and one who was rather hard to miss.

But even so, Australia had themselves done little to suggest they could blow the side away, given the two wickets had almost been gifted to them. So when Mohammad Rizwan and Iftikhar Ahmed began to scramble together another partnership and the lead whittled down to double figures, Australia might have pondered having a target to chase. However, talk of that was still much too premature, especially as Lyon continued to plug away, bowling better than he’s ever done against Pakistan. When some extra bounce rapped Ahmed on the gloves and Marnus Labuschagne – finally – held on to one at short leg, the Australian kitman could have probably put his feet up.

The finish, there onwards, was at least entertainingly Pakistani. Yasir was trapped in front, so plumb that even if they were playing with just middle stump, it still wouldn’t be worth a review. Yasir, however, had a century under his belt and felt it was worth reviewing, if only to spend a few extra moments out in the middle. Later, when Rizwan tried to farm the strike and ensure they got through to the dinner break without any further damage, Shaheen Afridi decided to lash out at Lyon, skying the ball instead and giving the offspinner his five-fer.

The best bit of comedy was still to follow. Muhammad Musa drove one to mid-on and, for some reason, Mohammad Abbas believed it to be a cue for a single. By the time he would realise it was anything but, Pat Cummins was already taking aim. And just like Pat Cummins so often does, he hit the stumps.

In Pakistan, however, the joke is unlikely to be much appreciated. While Australia steel themselves for a series against New Zealand likely to test them more than this one has, Pakistan will have to regroup quickly ahead of a two-match home series against Sri Lanka. What might have otherwise been a celebration of cricket coming home has become very serious business.