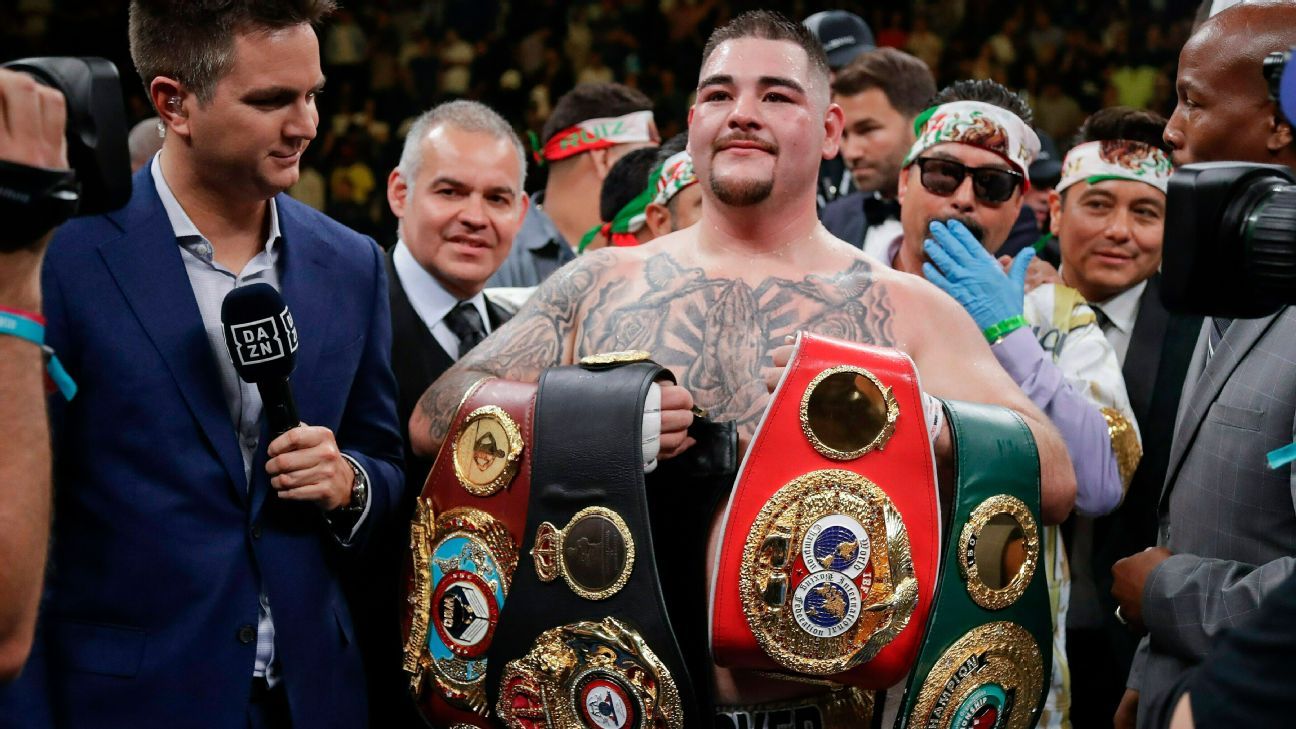 It was a night that Ruiz, who was late substitute in the fight, will never forget as he survived a third-round knockdown and went on to drop Joshua four times en route to the seventh-round stoppage win and one of the biggest upsets in heavyweight history.

Ruiz, hoping to replicate his victory in the rematch, came to Wednesday’s final pre-fight news conference again wearing a Knicks jersey, clearly as a reminder of his finest hour.

“I don’t want to let these beautiful belts go away,” said Ruiz, who again is the underdog. “I’ve been doing this since I was 6 years old and it’s finally paying off. There’s no way I’m gonna let these belts go. I’m going to die trying, and to do anything that’s possible to get that victory.

“It’s been a long journey, a long roller coaster in my life. And now that I finally made my dreams come true, there’s just no way I’m gonna let these go. May the best man win. I’m just ready.”

Ruiz and Joshua, their trainers and Matchroom Boxing promoter Eddie Hearn appeared at the news conference in Riyadh, Saudi Arabia. The rematch will take place Saturday (DAZN, 11 a.m. ET with the main event at approximately 3:45 p.m. ET) on the outskirts of the city at a recently completed temporary 15,000-seat open-air stadium in Diriyah.

“It’s been a long three months of camp,” Ruiz said. “I’ve been training really hard for this fight. Like June 1, I made history, and I think the importance is to remake history on [Saturday] in Saudi Arabia. Not much to say, but I’m ready to rock and roll. I know A.J. is going to come in with a different game plan. I know he’s prepared. I know he’s motivated, being more cautious. I know he’s going to try and box me around. My job is to prevent that and prepare for whatever comes my way.”

Trainer Manny Robles said Ruiz, despite the hoopla over the title victory and his lengthy celebration, is in shape and ready to go.

“It’s been three months of preparation, which is something we didn’t have for the last fight,” Robles said.

Ruiz got his title shot vs. Joshua on a month’s notice after Jarrell “Big Baby” Miller was booted from the bout for failing four random drug tests.

“I’m very pleased to say we had a great camp, perfect sparring partners, perfect time, perfect time to prepare to come up with a better game plan,” Robles said. “Understand we have a very difficult task in front of us. We respect [Joshua] and we know he’s a great fighter. We’re going to be ready for the task. Andy has had a great camp, and is mentally and physically prepared for the challenge. We look forward to it. I hope no one walks away disappointed Saturday night.”

After his shocking loss, England’s Joshua (22-1, 21 KOs), who had made six successful defenses and become one of boxing’s biggest stars, took just a few days to exercise his contractual right to an immediate rematch. Now he must answer questions about what went wrong in June against Ruiz (33-1, 22 KOs), 29, of Imperial, California and the first fighter of Mexican decent to win a heavyweight world title.

The 30-year-old Joshua said he is prepared to do so.

“I’m not here to put on show; I’m here to win,” Joshua said. “I’ve been around the block for a short space of time, so you have to understand I’m experienced and know what I’m doing. As I got back from New York, I got that commitment back, got into shape. I didn’t lose any heart, didn’t lose any fire in my belly, started hitting the heavy bag, preparing for this day. I’m actually really looking forward to it. No fear in my heart, no fear in my eyes. … I’m just going in with confidence, and I want everyone to have that same confidence and have a great time.”

Robert McCracken, Joshua’s trainer, said his fighter is better prepared for the rematch than the first fight, when he may have been distracted by making his heavily hyped United States debut and possibly overlooking a lightly regarded challenger.

“Anthony is in a much better place than last time at this stage, and I’m much happier with where he’s at,” McCracken said. “Everybody has said his training camp has gone really well. We’ve been training well out here in Saudi. Anthony has been training at the British Embassy. He’s got his own facility, and able to train diligently and hard.

“Listen, we know how good Ruiz is. We know he’s a top heavyweight fighter, and he’s the champion. We’re totally confident, completely different mood going into this fight than back in New York. And I think you will see the real A.J. for sure.”