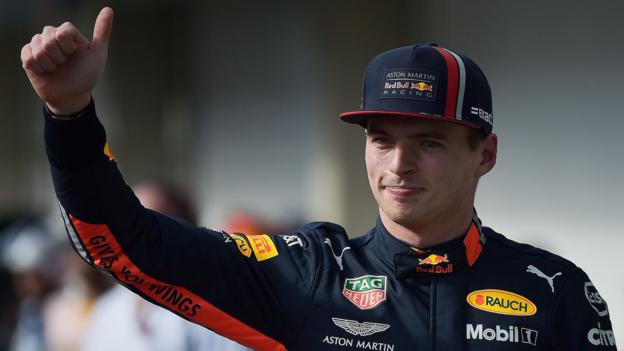 
Former F1 driver Jolyon Palmer, who left Renault during the 2017 season, is part of the BBC team and offers insight and analysis from the point of view of the competitors.

The Formula 1 season ended in Abu Dhabi on Sunday with a podium that summed up the season perfectly – the three outstanding drivers of the year were all on it.

Mercedes’ Lewis Hamilton won the race, from Red Bull’s Max Verstappen and Ferrari’s Charles Leclerc. For me – and I suspect many others – they were the best three drivers in 2019. Just not quite in that order.

The five best drivers of the year

In terms of choosing the best driver of the season, Hamilton and Verstappen were practically inseparable. Hamilton won the championship, but if I had to pick just one of them, I’d say Verstappen just edged it.

His relentless pace and consistently high level caused team-mate Pierre Gasly to be demoted from Red Bull to Toro Rosso in the summer break. And now the pressure is mounting on Alex Albon, Gasly’s replacement, as Red Bull desperately search for someone who can operate somewhere near Verstappen’s level.

In the first part of the season, Verstappen’s victory in Austria, achieved while lapping his team-mate despite being behind him on the first lap, underlined his dominance over Gasly, who has excelled against both his other F1 team-mates, Brendon Hartley last year and Daniil Kvyat this.

Three race wins, extremely few mistakes and being a constant thorn in the sides of Ferrari and Mercedes shows how good Verstappen has been.

This was underlined by the fact that he finished the season comfortably third, ahead of both Ferraris, despite being in a slower car in terms of absolute pace and being wiped out by each of the Italian team’s drivers at some point.

The only big downside for Verstappen are that a first pole position in Hungary should have been followed up with another in Mexico as well as Brazil, were it not for some foolhardy driving to not back off past a yellow flag.

That cost Verstappen another win. Potentially he could have exercised more caution in Belgium Turn One as well, but aside from that Verstappen’s season was flawless.

Equally as impressive as Verstappen, this was an almost perfect season for Hamilton, in which he was strongly in contention for victory at nearly every single race.

When Hamilton leads out of Turn One, the race is boring. This was demonstrated once more in Abu Dhabi, although team-mate Valtteri Bottas couldn’t challenge him from the back of the grid. When he doesn’t, he’s always a factor in the fight for victory anyway.

Hamilton has had one of his finest seasons and it has gone under the radar, because the title has been effectively wrapped up since June.

But winning 11 from 21 races proves his dominance, particularly because of the threat he’s had since the summer break from Ferrari and Red Bull.

In the end, I have marked Hamilton down behind Verstappen only because he went off track while leading in Germany and hit Albon in the chaotic final couple of laps in Brazil.

In reality, there was nothing to choose between the two. Hopefully next year we can see them in a genuine title fight. That is a mouthwatering prospect.

Ferrari have had a lot of stick this year – and quite rightly. They have been disappointing in every area.

Abu Dhabi was a real microcosm of their season. As Hamilton and Mercedes waltzed to an easy win, Verstappen showed up both Ferraris.

Both drivers hit the wall on Friday. Leclerc missed a final qualifying lap because of a pointless strategic timing ‘gamble’. The team were investigated for a fuel irregularity before the race even began, and ultimately found guilty. And they had a seven-second pit stop with Sebastian Vettel as well for good measure.

Leclerc can sometimes get lumped into Ferrari’s woeful season; he has after all made a fair few mistakes, such as crashing in Baku qualifying, in the race in Germany or hitting Verstappen on the first lap in Japan.

But this is only his second season in F1, and in reality he has been a revelation. Taking the pole position trophy for his seven poles shows how fast he has been – and he added two excellent victories as well.

Leclerc has brought numerous question marks upon the future of Vettel, because of how much he’s ended up shading his team-mate as the season has gone on, combined with Vettel’s own mistakes.

In fact, Leclerc has beaten Vettel on every single measure – he outscored him in the championship, took more wins, more poles and comfortably won their qualifying head-to-head. And that was despite Ferrari starting the year favouring Vettel, and imposing team orders – generally in the German’s favour – a number of times.

Races such as Bahrain and Belgium show how good Leclerc can be. Hopefully, with another year’s experience and a second season with Ferrari, he can cut the mistakes and become a season-long threat. Whether Ferrari can hold up their part of the bargain is a different matter.

Sainz is another man who has had an exceptional year, and just managed to take sixth in the championship with a brilliant last-lap pass on Nico Hulkenberg in Abu Dhabi. With both Gasly and Albon, his rivals for that spot, spending half a year in the significantly quicker Red Bull, that is seriously impressive.

Sainz hasn’t been the fastest this season. He’s actually been out-qualified by rookie team-mate Lando Norris 11-10 in the head-to-head – although the Spaniard is actually ahead when taking into account only sessions in which a fair comparison can be made. But he’s been relentlessly strong in the races and ultimately that is what counts.

Sainz’s first laps have always been strong, and his race-craft has been superb as well. He has made several great overtakes in the year, and barely had contact with other drivers, in spite of often being in the thick of the midfield chaos.

A first podium in Brazil was thoroughly deserved. It’s just a shame he didn’t actually get to stand up there as the stewards dithered when handing Hamilton a penalty.

McLaren have had a brilliant season, with huge progression from last year. But they have a lot of work to do if they and Sainz can achieve any better next year.

Consolidating fourth in the constructors’ championship and getting closer to the big three will likely be the aim in 2020.

This was a really tough call between Sergio Perez and Daniel Ricciardo, but in the end I’ve given Perez the nod because the Racing Point was not as good a car as the Renault and the Mexican all but matched the Australian’s points total.

It’s been an under-the-radar but extremely strong season once more for Perez. Five top-seven finishes in the past nine races leapt him up to 10th in the championship, ahead of Norris and almost catching Ricciardo, despite having a slower car across the season.

There have been a few mistakes along the way, particularly in a barren patch in the middle of the season such as at Germany and Silverstone, where Perez went a full eight races in a row without scoring.

But either side of that run he failed to score in only two other races and surely punched higher than his car, with four best-of-the-rest finishes, thanks to some super race performances.

The rest of the grid

This season has been a real fall from grace for Ricciardo, since winning races with Red Bull last year. The switch to Renault hasn’t been anywhere near a success. In fact, the team have dropped backwards by 31 points and a position in the constructors’ championship even though they splashed out on the big-money signing of the Australian.

But Ricciardo isn’t to blame for any of that. As a driver he has actually been very strong this year, outshining Nico Hulkenberg 14-7 in qualifying and 54-37 in the points.

Everyone who has raced alongside Hulkenberg rates him highly – including myself – so Ricciardo beating him in that manner, in his first season with the team, is an impressive start, personally at least.

The Pierre Gasly that drove the Toro Rosso in the second half of the season was very good. Both fast and consistent, he scored a stunning second place in Brazil in what was my favourite moment of the season.

Sadly, the Gasly that started the year in the Red Bull never got going. This was the ultimate Jekyll-and-Hyde season, with some of the best and some of the worst. Very mysterious.

George Russell, Albon and Norris have had strong rookie seasons. For Russell, he’s had no competition and a terrible car, which has made gauging his performance difficult. But for what it’s worth beating team-mate Robert Kubica 21-0 in qualifying was good. He had flashes of pace and barely put a foot wrong.

Albon’s Toro Rosso half-season was encouraging. His Red Bull second half started in an encouraging fashion, and fell a little flat towards the end of the season. He could do with kicking on a bit next year, but hopefully a full winter of team integration can help.

Norris’ season started very well. He was fairly consistently ahead of Sainz in qualifying in the first half of the year and was held back by misfortune in the races.

As the year went on, Sainz increasingly established himself over Norris as the lead McLaren driver, but points in six of the past eight races show that Norris still did a solid job. He is my rookie of the year.

At the other end of the spectrum, Kimi Raikkonen had a very good first half of the season in the Alfa Romeo, before slipping back, along with his team, in the second half.

A sequence of silly errors kicked off the second half of the season, but on the whole Raikkonen has still shown he has what it takes at 40, as he showed Antonio Giovinazzi the way, beating him in all but three races.

It was a tough year for Haas, and in particular Romain Grosjean, who was generally out-performed by team-mate Kevin Magnussen.

A number of incidents and a fair amount of radio whining didn’t help the Frenchman’s cause, but the team fell away from good midfielders to ninth in the constructors’ this year, and for the most part had no clue why that happened.

They desperately need to understand the tyres more, as this has been their Achilles’ heel since day one. One day they can be super quick, like in Barcelona when they were best of the rest. The next they are absolutely nowhere.

Finally, Kubica had the worst season of all. It was a remarkable achievement for the Pole to get back onto the grid after his rally accident in 2011, and the terrible injuries he suffered. But that’s where it ends, sadly.

I was a Kubica fan in his BMW days and when he was at Renault in 2010, and I hope people will remember him as that driver, rather than the tail-end Charlie who limped around in a very poor Williams car this year.

Either his right arm and hand – which have only partial movement, and which appear to be more or less a passenger in the car – were holding him back, or so much time away simply left him rusty. Or maybe both.

Either way, his performances this year were not a true representation of a driver who is supremely naturally talented.