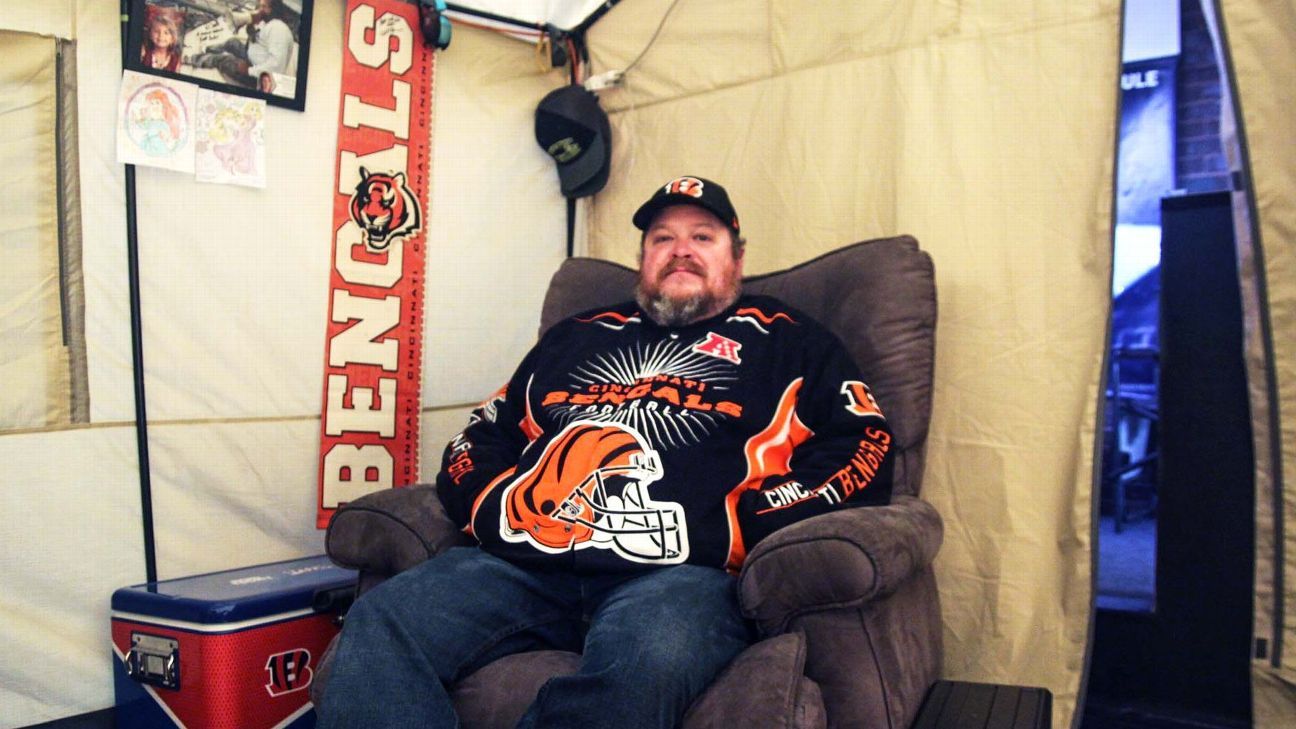 
MILAN, Ind. — Chrissy Lanham stood next to a cardboard cutout of her husband as the final seconds ticked off the clock inside Cincinnati’s Paul Brown Stadium.

The flesh-and-bone version of Jeff Lanham was watching roughly 45 miles west in the makeshift tent atop the couple’s restaurant and bar in Milan, Indiana. After two months, he was ready to get off the roof.

An offhand comment about living above the Lanhams’ Hog Rock Cafe until the Cincinnati Bengals won a game turned into a 57-day period that unexpectedly transformed Lanham into his town’s biggest celebrity since the basketball team that inspired the movie “Hoosiers.”

When the Bengals finally picked up a win by beating the New York Jets in Week 13 to improve to 1-11, everyone around Chrissy celebrated with “Cardboard Jeff” while the real person was surrounded by screams and flying beer at the bar in southeastern Indiana.

A few drinks, a tree-trimming truck and belief in one of the worst teams in the NFL put Lanham on the roof of his own restaurant. Resolve kept him there.

Back in 1991, Dennis “Wildman” Walker spent 61 days on a Cincinnati billboard under similar circumstances, a feat that inspired Lanham’s comments.

Cincinnati was 0-4 when Lanham said he would live on the roof until the Bengals won. It was hours before the Bengals hosted the Arizona Cardinals, the NFL’s worst team last season. Jeff and Chrissy watched from the usual spot in the stadium as Arizona won 26-23 on a last-second field goal. Cincinnati started its course toward the NFL cellar, with six consecutive losses to come.

When they drove back to the Hog Rock in their black and orange party bus, Lanham knew where he had to go. A friend grabbed a tent; someone else fetched their tree-trimming truck; and Lanham headed to the roof on a rainy night. Once he woke up the next morning, he realized he might be stuck up there for a while. He moved down a story to the lower portion of the roof so he wouldn’t have to use an extension ladder to climb down to the bathroom and shower.

Decades earlier, people actually paid to live in the building. Back then, it was called the Railroad Inn, a reference to the train tracks that are less than 100 feet from the entrance. But when he and Chrissy started the restaurant, Milan (pronounced MY-lan) was vastly different.

Phyllis Coe, 72, said she bought the building at a sheriff’s auction after the previous owner let the building rot. She charged the Lanhams $500 rent. Lanham, who hadn’t worked for a year after a leg injury forced him to stop working in a mill, poured all of his money into fixing the place up.

The NFL is all-consuming on a coach’s life, but Zac Taylor’s stops for coffee have given him a chance to briefly connect with the “outside world” — and make some friends. Story »

When Lanham received international media attention for his stay on the roof, it was the biggest thing to happen to Milan since the high school’s boys basketball team won the Indiana state title in 1954 against Muncie Central, which inspired the 1986 film “Hoosiers.”

Lanham said he used his growing media exposure to remind people about the ’54 champions. He also used his brief window of stardom to raise money for the medical costs of a friend’s daughter who was born with spina bifida. He came down for roughly 12 hours during a benefit event.

During his time on the roof, he held 50/50 raffles during Bengals games and sold $5 raffle tickets for people to eat in a tent that was donated by a friend’s company. He donated most of the things he received, including a pallet of soup from Campbell’s.

He had heaters and plenty of people to keep him company, but it was still tough.

Jeff and Chrissy watched Netflix simultaneously in different places, calling to start shows at the same time and see whether they liked them. She, along with others, brought laundry and food up to his tent, including meals from Skyline Chili topped with habanero cheese. They put up another tent and had Thanksgiving up there.

After nearly two months, he came home. The Bengals easily trounced the Jets, 22-6 on Sunday, for their first win of the season. People near Chrissy at the stadium gave Jeff’s cardboard cutout high-fives, while the watch party back in Milan erupted when the game ended. By the time Chrissy arrived home, Jeff was celebrating with everyone at Hog Rock. They stayed until 11:30 that night.

After the victory, Bengals running back Joe Mixon said he’d like to give Lanham something for staying up there that long. Lanham said that’s not necessary.

“I can’t say I want something from somebody because I didn’t do it for that,” he said.

When the Hog Rock opened at 4 p.m. Monday, the tent was still up behind the restaurant as a few regulars came in for drinks. Eventually, the tent will be donated to the local Boy Scouts chapter. Lanham plans to go to the Bengals game against the New England Patriots on Thursday. The next week, he might follow the team to Miami and take his wife as a way to say thanks for the past couple of months.

“I’m happy that he’s a loyal fan,” Bengals safety Jessie Bates said. “Hopefully next time he can stay on the roof until we lose or something like that.”

That’s not going to happen, Lanham said. Fifty-six nights was more than enough. He won’t be making any more bold predictions any time soon. But that doesn’t mean he won’t have the same belief that led him to the roof or that he doesn’t hope the franchise will be a winner again someday.

“Maybe it won’t change,” Lanham said. “Maybe it will. But I’ll still be a Cincinnati fan.”