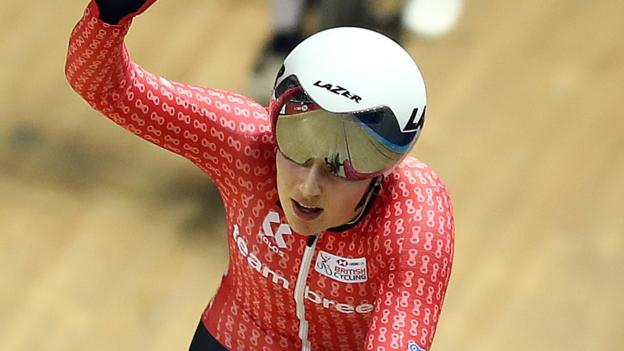 
Ella Barnwell, 19, enjoyed a double victory on day two of the National Track Championships in Manchester.

The Welsh cyclist added the scratch race title to the national omnium crown she won in October, finishing ahead of Josie Knight and Jenny Holl.

Those three riders teamed up with Anna Docherty, Anna Shackley to win the team pursuit title for Team Breeze.

Wale, last year’s silver medallist behind Matt Rotherham, was briefly outside Dan Bigham’s split times after he clipped a track pad on his second lap but he had enough speed to claw the time back, as he added the kilo crown to the individual pursuit silver medal he won on Friday.

Find out how to get into cycling with our special guide.

'We played a few too many shots because of the turn' – Craig Ervine
Corrie van Zyl set to return to work at CSA
'Now is the time for players to put their hands up' – Mark Boucher
Bruins acquire Ondrej Kase from Ducks for David Backes, first-round pick
DPOY hopeful Anthony Davis exits with bruised calf, returns to put up 7 blocks in 31 minutes