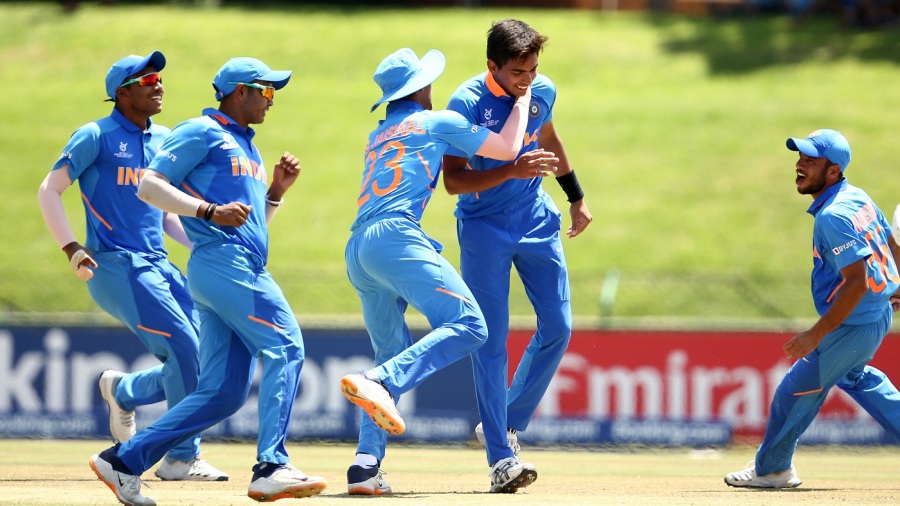 In their chase of 234, Australia received a punch to the gut right at the start, when their in-form opener Jake Fraser-McGurk was run-out for a diamond duck. After that India’s right-arm quick Kartik Tyagi delivered three blows in his first two overs to put Australia down for the count which they couldn’t ever recover from, eventually losing to the defending champions by 74 runs at the first quarter-final in Potchefstroom. India’s win sets them up for a semi-final clash against the winners of the quarter-final between Afghanistan and Pakistan, while Australia can now, at best, finish fifth in the tournament.

Tyagi, consistently clocking speeds in upwards of 135kph, was given the responsibility of beginning India’s defense. His first delivery was driven by Sam Fanning to mid-off, but he took off for a single while Fraser-McGurk was watching the ball and as a result was run-out without facing a ball. By the end of the over, Australia’s misery had compounded thrice over, with their captain Mackenzie Harvey lbw to a full delivery – although it pitched outside leg stump – and Lachlan Hearne bowled for a first-ball duck to Tyagi’s yorker.

Tyagi’s second over was equally menacing albeit only half as rewarding, with the Australia batsmen playing and missing before No. 5 Oliver Davies edged a drive into the hands of Yashasvi Jaiswal in the slips. From 14 for 4, it was going to be a mammoth effort for Australia to win the game, especially after Tyagi struck again in his second spell, dismissing Patrick Rowe in the 21st over as his fourth scalp, to reduce the batting side to 68 for 5.

But Australia were not willing to give up just yet. Fanning and No. 7 Liam Scott – who wasn’t in the XI but was batting as a concussion substitute following Corey Kelly’s injury while fielding – put on 81 for the sixth wicket. The partnership made India nervous, with India captain Priyam Garg shouting “body language, guys” to keep his team-mates zoned into the game. Fanning held up one end while Scott played more freely, but soon after the latter hit a six over midwicket, he was out caught-behind by legspinner Ravi Bishnoi in the 41st over. The score of 149 for 6, however, soon became 155 for 9 following a team hat-trick.

In the 42th over, Fanning was dismissed by an Akash Singh short ball for 75. The next ball Australia were eight down as Sangha’s attempted jab-and-run didn’t pay off. Wicketkeeper Dhruv Jurel picked the stray ball and aimed at the stumps with an underarm throw, effecting his fourth dismissal of the day, running Connor Sully out. Singh then cranked up the pace to No. 10 Todd Murphy to bowl him for a duck. It wasn’t long before Australia folded for 159, igniting celebrations from the handful of India fans who were present at the ground.

Bangladesh bowl first in tournament opener, Mandhana out with illness
Defending champ Stefanos Tsitsipas to face Felix Auger-Aliassime in Open 13 final
Elena Rybakina dumps out Karolina Pliskova at Dubai Tennis Championships
How the Golden Knights drove Vegas hockey-mad — and how they plan to keep it that way
NFLPA reps vote to send proposed CBA to full membership for approval