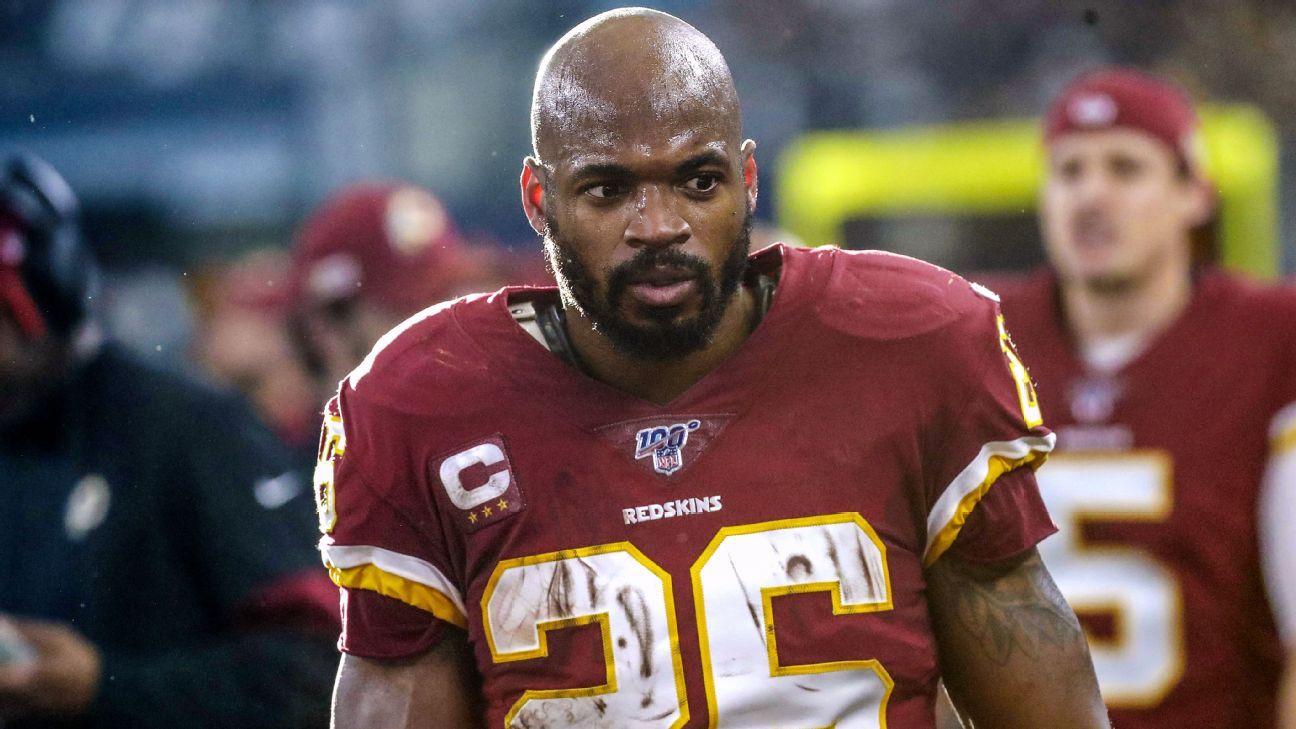 
The Washington Redskins added more talent to their running back room this offseason. That might impact Adrian Peterson‘s future; it won’t alter his approach.

He’ll try to win the job and dispense knowledge along the way, continuing in a mentorship role.

“I’ve always had the mindset of being open to competition,” Peterson said on a Zoom video conference. “So I will embrace it the same way. People ask me that question all the time — ‘Man, the Redskins are really packing that running back room, huh?’ I’m like, ‘Yeah, they are.’ But hey … just gotta execute and produce.”

The Redskins signed free agent running backs Peyton Barber and J.D. McKissic. They also drafted Antonio Gibson in the third round. Derrius Guice and Bryce Love — both of whom are coming off knee injuries — also remain on the roster and can help on every down.

McKissic doesn’t threaten Peterson’s job security because he’ll be a third-down back, but the additions of Barber and Gibson might. Gibson played mostly receiver in college, but the Redskins view him as a running back who can pair with other backs at the same time.

“Both of those guys are talented, especially the young guy coming in,” Peterson said. “It was a good move. When you’ve got good players and playmakers out there, you want to add those guys to the team.”

The Redskins picked up the second year of Peterson’s contract earlier this offseason. But in such a crowded room, no player is guaranteed anything.

The desire to move up those charts won’t lead Peterson to shun his teammates. In his two seasons with Washington, teammates have often said how much they’ve learned from him — both in talking to him and observing him in the meeting rooms.

“I’m not that guy that’s gonna withhold something to give myself an edge,” Peterson said. “A lot of these guys looked up to me — and still do — at a young age. So I’m going to do my part.”

Peterson has rushed for 1,940 yards and 12 touchdowns in two seasons with Washington. He’s missed one game, when then-coach Jay Gruden made him a healthy inactive for the 2019 season opener.

But Gruden was fired following an 0-5 start, and Peterson became the workhorse. With young talent in the passing game, the Redskins could rely on their defense and running game this season.

Based on early Zoom meetings with the coaches, Peterson said there will be times the Redskins have multiple backs on the field at the same time.

“It’s been exciting to see our role in the offense,” Peterson said.

But a close friend who won’t be around is perennial Pro Bowl tackle Trent Williams, who was traded during the draft.

“I didn’t like the trade,” Peterson said. “Obviously I feel like Trent is the best offensive lineman in the game. And I’m able to see firsthand what he’s able to do. I was hoping that there would be some good ending to him and what the Redskins were dealing with, but I’m happy for him. … As long as he’s happy, that’s all that matters.”