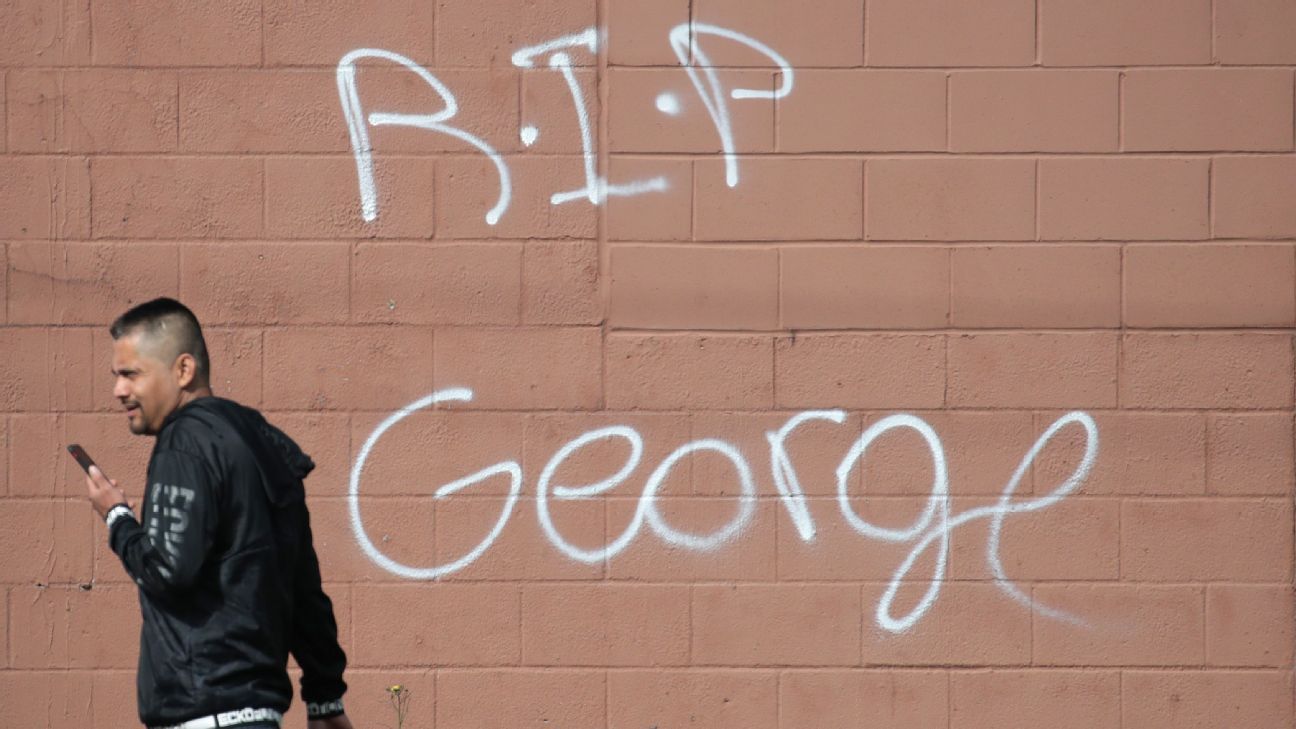 “They have been unheard for far too long,” Burrow, the Heisman Trophy winner and No. 1 overall draft pick, said Friday on Twitter. “Open your ears, listen, and speak. This isn’t politics. This is human rights.”

The comments came after a night of outrage and unrest in Minneapolis, where Floyd, who is black, died after Derek Chauvin, a white police officer, kneeled on his neck for several minutes.

Miami Dolphins coach Brian Flores, who is one of four minority coaches in the 32-team NFL, issued a statement Friday in the aftermath of several high-profile deaths of black people.

“Many people who broadcast their opinions on kneeling [during the national anthem] or on the hiring of minorities don’t seem to have an opinion on the recent murders of these young black men and women,” Flores said. “I think many of them quietly say that watching George Floyd plead for help is one of the more horrible things they have seen, but it’s said amongst themselves where no one can hear. Broadcasting that opinion clearly is not important enough.

“I lead a group of young men who have the potential to make a real impact in this world. My message to them and anyone else who wants to listen is that honesty, transparency and empathy go a long way in bringing people together and making change. I hope that the tragedies of the last few weeks will open our hearts and minds to a better way of communicating and hopefully create that change.”

San Jose Sharks winger Evander Kane, who is in his 11th season in the NHL and has been one of its most vocal critics regarding racism in the sport, said Friday on ESPN’s First Take that he hasn’t seen much public comment from NHL players about Floyd’s death or the aftermath in Minneapolis.

“We need so many more athletes that don’t look like me speaking out about this, having the same amount of outrage I have inside, and using that to voice their opinion, to voice their frustration, because that’s the only way it’s going to change,” Kane said. “We’ve been outraged for hundreds of years and nothing’s changed.

“It’s time for guys like Tom Brady and Sidney Crosby and those type of figures to speak up about what is right and what, in this case, is unbelievably wrong. That’s the only way we’re going to create that unified anger to create that necessary change, especially when you talk about systematic racism.”

New Orleans Saints safety Malcolm Jenkins, who co-founded the Players Coalition, also called for white athletes to join the discussion around race and policing in an interview on ESPN’s SportsCenter.

“This is an American issue. And more importantly, this is a white issue that I think is perpetuated on black people. Racism in our country has been a one-way street,” Jenkins said. “And so when we talk about these issues, it has to be everybody involved; it can’t just be black people who are fighting against the police. This is an American issue that everybody should take offense.”

Jenkins challenged white athletes who have spoken out “to use their privilege and their voices to the fullest extent.”

“They, more than anybody else, have the ear of the majority of this country — whereas black athletes, we are influencers, we have a great voice, especially in the black community; but to change these issues, it comes as the entire society has to get involved,” he said.

Jenkins also said athletes have a unique platform on which to convene people and bring issues and voices to the forefront, and a responsibility to do so.

“Sports is where some people like to go to escape from society, and we cannot allow people to escape from these issues. We’ve done that for generations and generations, and we won’t allow it anymore,” he said.

The Cleveland Cavaliers, meanwhile, issued a statement saying everybody has a responsibility to “help end horrible situations and outcomes like this.”

“Our collective humanity suffers greatly in the midst of senseless acts like this. Not just now, but always,” the Cavs’ statement said. “… Let’s all respond with a sense of urgency and deeper determination to make life better and work towards a world where everyone feels safe.”

Other prominent figures throughout the sports landscape commented on Friday.

Las Vegas Raiders quarterback Derek Carr said he was “disgusted, mad and broken-hearted” about what happened to Floyd.

“Anytime someone loses their life it’s a terrible thing especially when it could’ve been prevented,” Carr said in a post on Twitter. “My opinions won’t make a difference on how that should’ve been handled better, but I do think my platform can be used to help. I don’t know what it’s like to have a different skin color so I won’t pretend to know.”

So sickened beyond words by the brutal police killing of George Floyd. When will all Americans be treated and respected equally regardless of race and gender?? We are yearning for true leadership and inclusivity from the top.

Praying for all of those like #GeorgeFloyd and their loved ones who have been impacted by police brutality and these senseless, violent crimes. This is heartbreaking and disgusting to continuously see. This cannot continue and we have ALL do our part here. pic.twitter.com/BfSRyrn4wp

Now lets see justice served, and the other officers who stood there need to be held accountable too! https://t.co/JWJ3xtDhmQ

“The world will never grow until we are comfortable having the uncomfortable talks and taking action upon them,” Washington Wizards guard Bradley Beal said.

Clemson quarterback Trevor Lawrence called for a shift in thinking and a need to end injustice.

If you put yourself in someone else’s shoes and you don’t like how it feels-that’s when you know things need to change.

Added Houston Astros infielder Alex Bregman: “We are not free until we are free.”