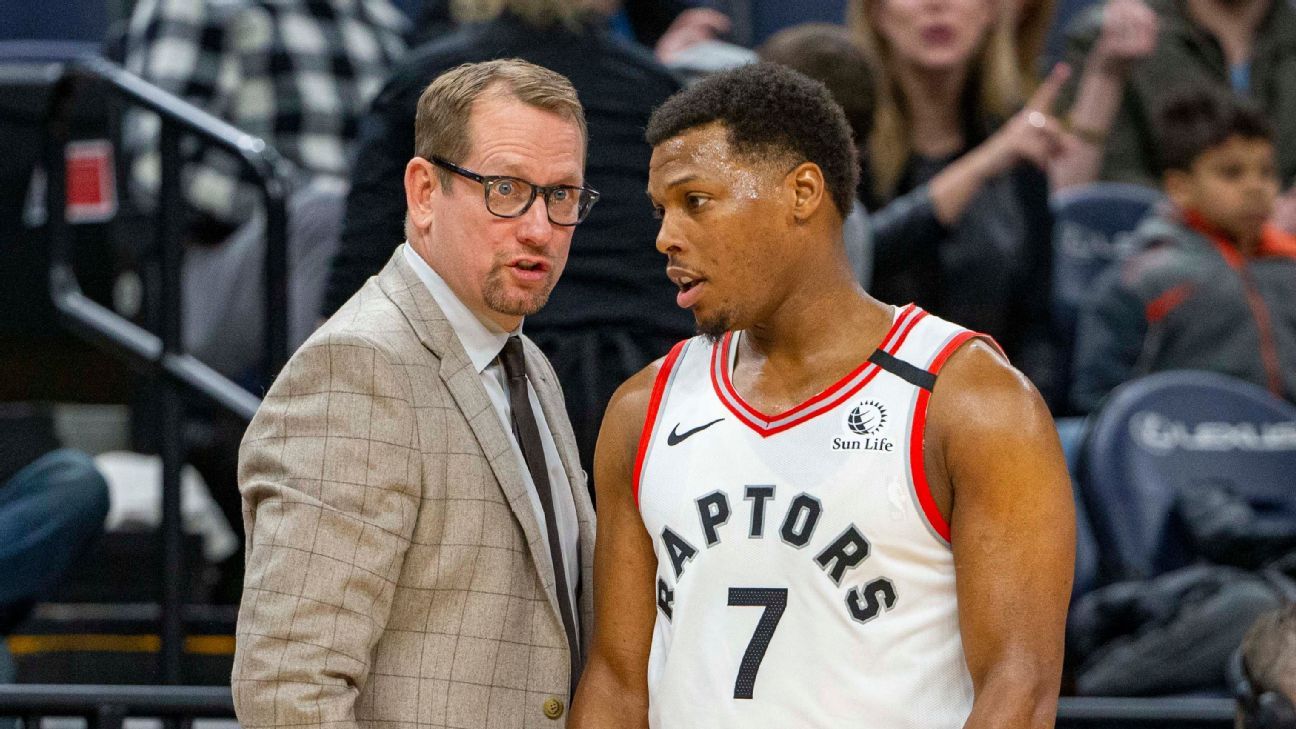 Next week, 21 of the 22 teams participating in the NBA’s restart will begin trickling to Orlando to start isolating. But one team from beyond the state’s borders has already traveled to central Florida and kicked off what could amount to nearly four months away from home.

While the Toronto Raptors are not yet at the NBA’s campus at Walt Disney World, their experience leaving their families behind and beginning basketball activities in Florida is essentially a test run for the environment the NBA will attempt to execute in Orlando.

As the NBA’s lone team based outside the United States, the Raptors faced additional complications in trying to gather ahead of the resumption of the season. The city of Toronto didn’t move into Phase 2 of its reopening plan until June 24, and anyone entering the country must immediately quarantine for two weeks. The majority of Raptors players left Canada when the season was suspended, so returning to Toronto for the NBA’s two-week training camp period only to leave again to head to Walt Disney World was not a feasible option.

So on June 22, when Toronto was still in Phase 1, the Raptors traveled to Florida Gulf Coast University in Fort Myers, Florida, where they’ll hold training camp until relocating again on July 9, 151 miles north.

And, now that they’ve arrived, Toronto is getting a taste of the life all 22 teams headed to Florida will soon be living, settling into their individual rooms in an expansive hotel that is otherwise unoccupied. Nurse — an avid music fan — practices his guitar and electric piano in his room.

Breakfast and lunch are served in a large ballroom, with tables liberally spaced throughout the room and with only two chairs — on opposite sides of the table — at each of them. Dinner is delivered directly to their rooms.

Players and coaches are shuttled directly from the hotel to FGCU for workouts, albeit with limitations.

“It feels like we’re going to basketball camp every day,” Nurse said with a laugh.

Nurse and his staff are at FGCU’s gym from roughly 8:30 a.m. to 5:30 p.m. every day, as players individually come through and work out, per the NBA’s guidelines, with a cleaning crew staying busy by keeping equipment disinfected in between workouts.

“But it’s OK. … How much more time do you need to spend in your hotel room?”

The NBA and NBPA have officially approved the details of the season restart, with seeding games tipping off July 30 at Walt Disney World.

As the NBA began to formulate its return-to-play plan, the Raptors knew that hosting the initial phase of their training camp outside the Toronto market was a possibility. That gave them an opportunity to come to grips with having to be the first team to be separated from their families for more than two months. The earliest that family members could join Toronto players in Florida would be at the end of August, after the first round of the playoffs, if they advance. Because the NBA’s current plans don’t include guest arrivals for coaches and team staff, the Raptors’ staffers who are already in Florida could go nearly four months without seeing their families.

“I haven’t sensed any discontent or whatever about having to be here, or asking why,” Nurse said. “In general, the guys are good, and I think most of them are concerned about their careers and getting back to wherever they were or getting them better. I think there’s a real level that I see … the care factor is high.”

Nurse also believes his roster is well-equipped to handle the pressure of interacting with pretty much only one another for multiple months.

“There’s some genuine chemistry with these guys,” he said. “They like to play in general, they like to play with each other, the love of the game. … I would give a lot of our guys a lot of high marks in those areas.”

And they’re not thinking about the length of their commitment.

“Right now, we’re not,” Nurse said on Saturday. “Maybe at some point on the back end of it, or midway through it, we might. But I just don’t know.

“We’re, what, five days in? They’ve been a snap of a finger. They’ve blown by. So it doesn’t feel like a burden or overwhelming. It just feels like we’re all starting and getting ready to go.”

It certainly doesn’t hurt that the defending champion Raptors are one of the teams with the most to gain from the resumption of the NBA season. Toronto, which will begin play in second place in the Eastern Conference standings, has the fourth-best odds of making the NBA Finals among all 22 teams and has third-best odds to repeat as champions, according to simulations run by ESPN’s Kevin Pelton using ESPN’s Real Plus-Minus.

After virtually every member of Toronto’s core rotation missed a month or more with injuries during the season, the Raptors are now as close to 100% as any team in the league.

“The vibe around the players is good,” Nurse said. “They look physically great.”

Outside Toronto’s Fort Myers bubble, though, there are larger concerns.

The Raptors arrived in Florida as the state was experiencing a record surge in positive coronavirus tests: 8,816 on Thursday and 9,564 on Friday, according to Florida’s COVID-19 statewide tracking dashboard. By comparison, there were 4,008 positive tests on June 19 and 2,318 on June 12.

During a Friday conference call to announce an official ratification of a deal with the National Basketball Players Association about restarting the season next month, NBA commissioner Adam Silver admitted that the rising case numbers in Florida are a concern. With minimal exposure to the general public, the NBA hopes to avoid a coronavirus outbreak that would force the league to shut down the season again, though Silver acknowledged that’s a possibility.

But the rising number of positive cases is something Nurse is paying attention to, especially as he and his team try to keep their mini-bubble intact.

“I think for sure we think about [the virus],” he said. “But for me, in general, I’m not doing anything. I’m staying in my hotel. Every second I leave, I’m wearing my mask, I’m staying away from people. I’m going to the gym and doing that, and then coming back. I don’t even want to stop anywhere.”