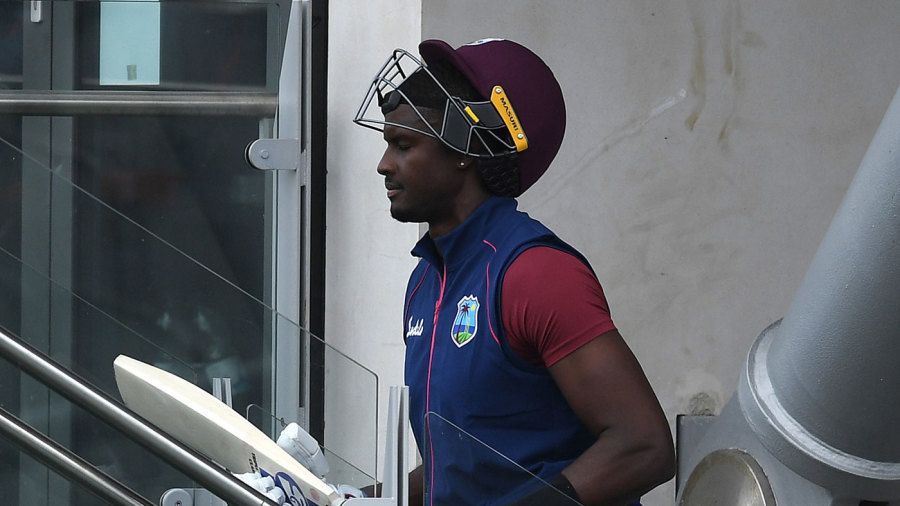 West Indies captain Jason Holder had another short stay at the crease as the tourists’ second and final intra-squad match before next week’s first Test against England finally got under way at Emirates Old Trafford.

Holder has been recently troubled by an ankle niggle and while the Windies have played down concerns about whether he is still hampered by the injury, he is running out of chances to get some match sharpness under his belt.

He was out for a golden duck and did not bowl in the Windies’ first internal match last week, and he looked ill at ease during his brief time in the middle on Tuesday, when the all-rounder was dismissed for only five off 13 balls.

In truth, he could have departed for a second successive nought after he clipped his second ball to midwicket, only for Preston McSween to spill a relatively straightforward chance.

Jermaine Blackwood was also out for a single-figure score as the intermittent rain, which had wiped out the first four sessions of this four-day fixture, relented to allow play to start at 2.20pm local time under floodlights.

The wickets of Blackwood and Holder were part of a top-order wobble that saw the side led by the latter lurch from 79 for 1 to 108 for 5 against a Kraigg Brathwaite XI before closing early on 120 for 5 due to bad light.

The decision to abandon plans to pursue first-class status for this contest meant Oshane Thomas was drafted in to open the bowling. The paceman made an immediate impression as a precision yorker castled Sheyne Moseley first ball.

ALSO READ: Jos Buttler in possession as England prepare to get back on field

It was a dramatic start to the game but thereafter Thomas over-pitched in an effort to find early swing while Keon Harding was wayward and bowled several no-balls to allow Joshua Da Silva and Sunil Ambris to build a platform.

Da Silva was the aggressor and the mainstay of the innings, getting off the mark with a streaky flash over the slips off Harding but then gradually warming to his task with a series of silky front-foot drives.

The pair went along at five an over in a 79-run stand, which was ended when Ambris, on 25, got a top-edge off Chemar Holder (2 for 15) which looped to short-leg, leaving Marquino Mindley to run in and take a stooping catch.

Blackwood, aiming for a recall at the Ageas Bowl on July 8 nearly three years after his last Test start, made just 1 off six balls before Mindley found the outside edge and John Campbell took a simple chance at second slip.

Campbell had no problem also snaffling Nkrumah Bonner, who failed to trouble the scorers after an attempted drive off Chemar Holder caught the edge. But McSween would give the paceman’s namesake a chance early in his innings.

Jason Holder, though, could not capitalise on his reprieve as the frugal Anderson Phillip (6-3-9-1) put the ball on a good length and the skipper tentatively prodded forward, nicking to Shamarh Brooks at a wide third slip.

Da Silva was measured amid the cluster of wickets and although he is listed in the 11 reserves – with seemingly only paceman Shannon Gabriel in with a possibility of being elevated from that group into the Test squad – the opener was still there at the close on 60 not out when the players came off 45 minutes into the final session.

Initially the players, wearing their navy and maroon training kits, were scheduled to play until 7.30pm local time but the darkening skies led to Da Silva and Raymon Reifer (2no) walking off just before 6pm on the second day.