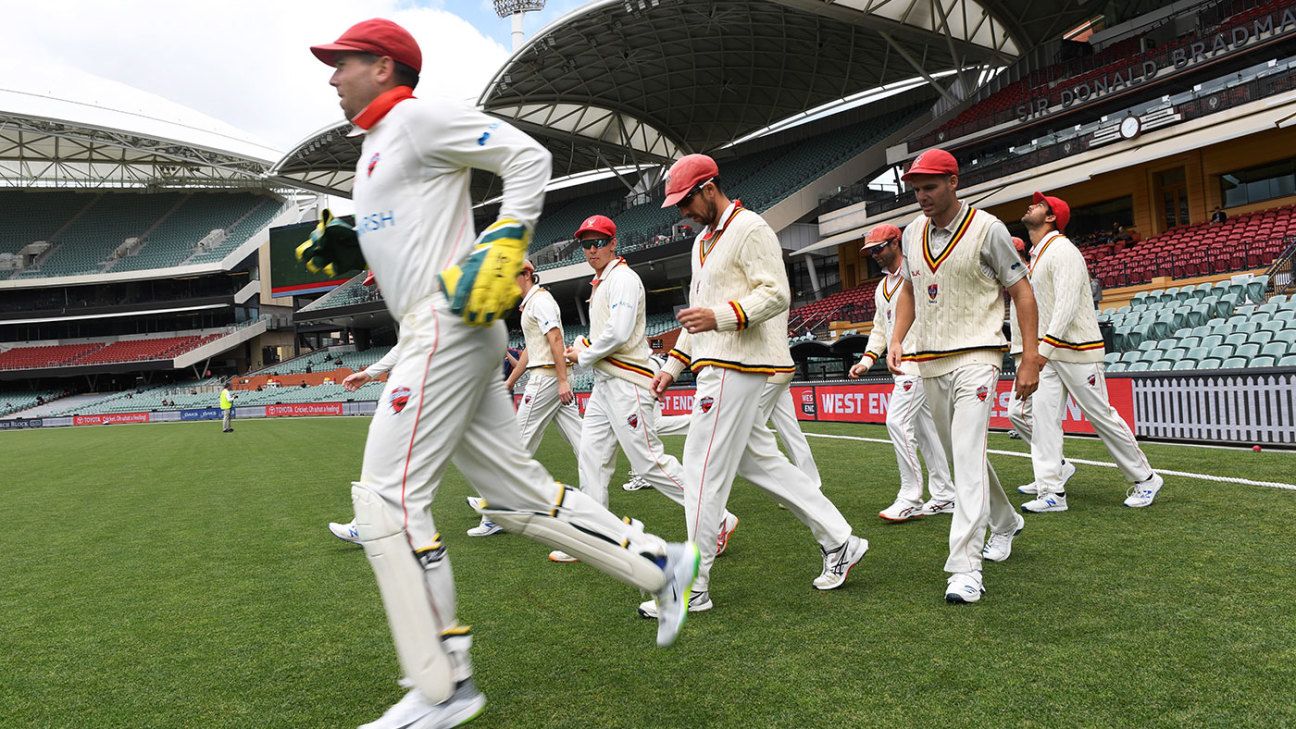 
South Australia and the Adelaide Strikers would have their cricket programs combined and grade cricket clubs be reduced from 13 to as few as eight under recommendations made by Mike Hussey in a blunt independent review of the underperforming state association.

In an executive summary of the review, Hussey stated that a “culture of mediocrity” was deeply entrenched in South Australian cricket, particularly in terms of the steady diminishing in importance for grade cricket over recent years, meaning that clubs feel disempowered while players do not see the need to perform at the local level in order to progress into state and BBL squads. He noted that the current state selection panel was perceived to be conflicted due to parallel roles within the state’s high performance department.

Hussey also advocated the employment of a specialist batting coach to support the head coach, to address technical and tactical issues that have helped push the Redbacks to the bottom of the Sheffield Shield standings in each of the past three seasons. At the same time, Hussey has called for a balance “between people who know the SA way and people from outside the state who have worked in successful programmes” in terms of coaching and support staff.

ALSO READ: All the Australian state squads for the 2020-21 season

“As one of the smaller populated states, depth is always tested and as a result SA will regularly need to ‘punch above its weight’,” Hussey wrote. “For this to happen, the SACA will need to think and act differently in some areas of its cricket high performance.

“If the SACA wants to move forward then there must be change. Building relationships and trust from the bottom up and from the top down will require strong, consistent leadership. There will have to be an element of letting go of the past and focusing on the future. Unfortunately, a strong view from the people interviewed is that South Australian cricket has had a culture of mediocrity for many years and acceptance of it has been a barrier to success.

“There are governance issues that allow this to happen. The cricket foundations i.e. Premier Cricket, club and junior cricket are generally not strong, making it difficult for SA to consistently compete with other states. The SACA Board should have an increased focus on the business of cricket, the HP [High Performance] Committee should have more recent HP experience and the Premier Cricket Committee is proving to be ineffective in providing a high-quality Premier Cricket competition.”

Tellingly, Hussey targeted state and national pathways as sources of rancour, which have led to emerging players not regarding grade cricket as critical to development and performance. “Premier Cricket is a crucial part of the pathway, which firstly needs to be acknowledged, then respected,” Hussey wrote. “Changes will need to be made to ensure a higher quality competition that provides tough, competitive cricket and in doing so, breeds players capable of performing at the next level and beyond.

“Changes in the number of teams in the competition and a better relationship with SACA HP should be adopted. I appreciate that this is not a simple process but this is required if the Board wants sustainable success. Relationships built on respect, honesty and being valued underpinned by a selection policy based predominantly on performance in Premier Cricket will provide genuine aspiration for players.”

Hussey also highlighted shortfalls in the quality of junior coaching, and the perceptions of conflict of interest among state selectors, which include the high performance chief, Tim Nielsen. “An element of selector independence is required given current selectors are full-time executives in the HP programme and are seen as conflicted,” Hussey wrote.

“The effect of participation in the current High Performance system has created a sense of entitlement for many young players, not just in SA but around the country. They feel the Pathways Programme will assist them to by-pass Premier Cricket to achieve long and successful first-class careers. This has proven to be unsuccessful and created a myriad of problems such as, devaluing the importance of Premier Cricket and creating behavioural traits that won’t set players up for long-term success.”

Hussey’s advocacy of combined state and BBL programs is a strong indication that the current Strikers coach, Jason Gillespie, will be asked to take charge of the state team also, having enjoyed a great deal of success with Yorkshire and Sussex in county cricket. However, to do so, Gillespie would likely have to find a way out of his current deal with Sussex, which lasts until the end of the 2022 northern summer. The shortlist for the new coach is down to between five and 10 candidates.

“The appointment of the new Redbacks Head Coach is a crucial decision and should not be rushed,” Hussey wrote. “The effects of Covid-19 will be felt by all cricket associations. It has provided an opportunity to focus on what is most important in cricket programmes. It is clear securing the right people, having strong junior cricket foundations and more reliance on Premier cricket (and less reliance on Pathway Programmes) will be outcomes of the pandemic.”

Player recruitment was addressed by Hussey with recommendations including calls to “identify and try to recruit the best young talent around the country (former Aust U/19 players not contracted) and engage them through Premier Cricket making them earn opportunities at the next level” and to “target the best 10th – 15th players from other states”.