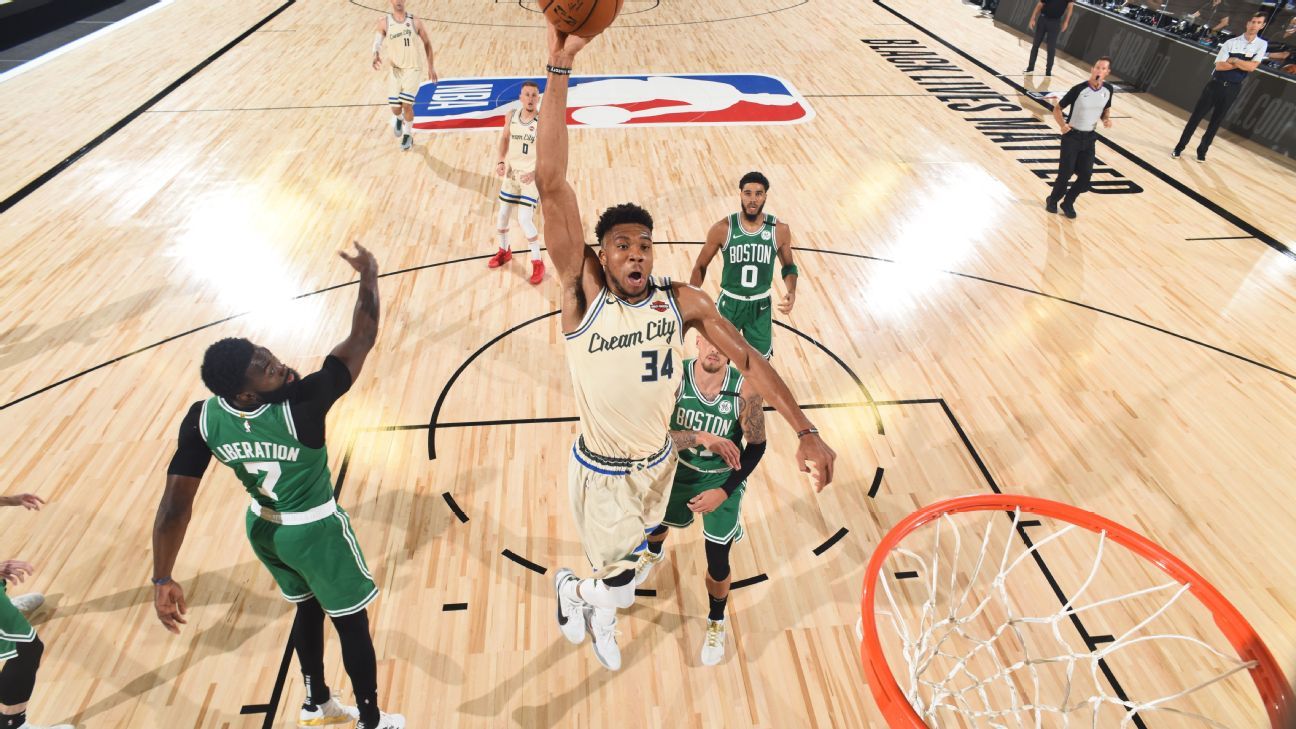 
For Giannis Antetokounmpo, attacking the paint is now a science.

The Milwaukee Bucks superstar was in MVP form early during his first game of the NBA restart, as his Statue of Liberty dunk highlighted the first quarter.

“Right in between the half-court and the 3-point line, I can take two steps and dunk,” Antetokounmpo said after Milwaukee’s 119-112 victory over the Boston Celtics.

Antetokounmpo went off for 36 points, 15 rebounds and 7 assists on 14-20 shooting. The Bucks forward tied Shaquille O’Neal (18) for the third-most 30-point, 15-rebound games in the past 40 seasons, per research by ESPN Stats & Information.

“When you see him put that work in every day, every single day, just pounding away to get better, I don’t really want to normalize what he does either, though, obviously, but that’s Giannis,” Brook Lopez said. “That’s what he does.”

Defensively, the Bucks set the tone by holding the Celtics to 40.7% shooting and holding Jayson Tatum to just five points on 2-18 shooting.

“Wesley Matthews got the assignment out of the gate and I think he sets the tone and really makes it tough for guys to get into a rhythm early, to get anything clean and anything that feels good,” Bucks coach Mike Budenholzer said about defending Tatum. “Then you just throw more waves of guys at him.”

After 144 days of no official game action, the Bucks showcased why they hold the league’s best record at 54-12. However, Antetokounmpo still sees room for improvement.

“Since Coach Bud came to the team, he made me realize that I can do so much more. Today, like in the third quarter, he pulled me on the side and scolded me, told me that I wasn’t moving enough, I wasn’t active enough. I was not rebounding the ball. And, he was 100 percent right about getting in better shape,” Antetokounmpo said. “I’m not in the best shape right now and game by game I’m hoping to get in better shape, but he made me realize that I can be so much more active.”

If Antetokounmpo can somehow keep improving, the Bucks’ title chances will be in the best shape possible since 1970-71, the last time they won an NBA title. — Eric Woodyard

The Bucks get out in transition and Giannis Antetokounmpo finishes on the break with a powerful one-handed jam.

The Beard moves into second place

James Harden had himself quite the start in the bubble versus the Mavericks, as his 23 first-quarter points moved him past Rockets legend Calvin Murphy for second on the franchise’s all-time scoring list.

Harden still needs over 8,500 points to catch Hakeem Olajuwon for the franchise record, as “The Dream” retired with 26,511 career points.

Wesley Matthews was miked for sound during Friday’s Bucks-Celtics matchup, and fans were fortunate enough to hear the Milwaukee guard shouting out instructions to Giannis Antetokounmpo. Wanting to make sure Giannis heard his instructions, he called for some Greek assistance from the Bucks superstar’s brother Thanasis.

The “in your language” request didn’t yield the desired results, but it’s the thought that counts, right?

While sitting on the bench, Wesley Matthews gets a message to Giannis Antetokounmpo by telling his brother Thanasis to shout out to him in Greek.

Kings basketball is back, and with it, a movement.

You can check out the entire stream of tweets on police brutality, economic inequalities and other social justice issues on the Sacramento Kings’ official page.

What the Blazers’ win means

Friday’s overtime win over the Memphis Grizzlies gives the Portland Trail Blazers a much better chance of facing the Grizzlies again with a playoff spot on the line. Portland entered the restart ninth in the Western Conference, 3.5 games back of the Grizzlies, and needing to stay both ahead of the other West hopefuls and within four games of Memphis to participate in the NBA’s one-of-a-kind play-in matchup.

Damian Lillard stops on a dime to put Anthony Tolliver to the floor, then follows up by sinking a step-back 3-pointer.

With a loss Friday, the Blazers would have reached the play-in matchup in 18% of my simulations of the remaining seeding games. With a win, Portland now makes it a full 33% of the time. The Blazers’ chances are still less favorable than those of the New Orleans Pelicans (41%), by virtue of their easier schedule and slightly superior projection based on ESPN’s real plus-minus ratings for their players.

The big losers Friday were the Sacramento Kings, who dropped their restart opener to the San Antonio Spurs. Because the Blazers have one additional win and one additional loss, they come out ahead if they end up tied with the Kings. Sacramento will therefore have to win two more games than Portland of the remaining seven to have a chance at the play-in matchup. — Kevin Pelton

Remember that Suns fan who promised he’d get a face tattoo if Deandre Ayton made a 3-pointer? Well, if Ayton’s expanded range in scrimmage games wasn’t enough, now he’s definitely on the hook.

Deandre Ayton knocks down his first career 3-pointer, a wide-open shot from the top of the key.

Ayton was 0-for-7 from 3-point range in the regular season prior to Friday’s make against the Wizards.

Jusuf Nurkic scores first basket in more than a year

Portland Trail Blazers center Jusuf Nurkic hadn’t played a regular-season game since breaking his leg on March 25, 2019. He was on the verge of returning to action when the 2019-20 season was put on hold this March, and on Friday he finally made his long-awaited comeback, and wasted little time in getting in the scorebook.

Zach Collins drops off a nice pass to Jusuf Nurkic, who rises up for an and-1 dunk on Jaren Jackson Jr.

Indiana Pacers guard Victor Oladipo will make a decision on a full commitment for the NBA restart ahead of tomorrow’s game vs. the Philadelphia 76ers.

At the start of July, Oladipo had said he would opt out of the NBA restart, because of the risk of reinjuring his quadriceps tendon. However, he traveled to Walt Disney World Resort with the team and after participating in early practices, he reconsidered his decision.

Richard Jefferson and Scottie Pippen react to Victor Oladipo still mulling over whether to play in the NBA restart in Orlando.

The Memphis Grizzlies arrived for their game against the Portland Trail Blazers wearing shirts that said “Breonna Taylor” above the hashtag #SayHerName. Taylor, a Black emergency medical technician, was killed in Louisville, Kentucky, after plainclothes officers executed a “no-knock” warrant related to a narcotics investigation and shot the 26-year-old at least eight times, per reports. No drugs were found.

“This is a moment in time that’s bigger than basketball,” Grizzlies coach Taylor Jenkins said. “And just as a country, as humans, we need to engage in that dialogue. This is something that all of our players, our entire organization and team and staff have been discussing. Through the leadership of our players to come together and support this movement, there will be more to come. This is the first display to create awareness and peacefully protest. We want awareness. We want accountability and action, and we want justice for Breonna Taylor and for so many other lives.”

Magic forward Jonathan Isaac is the only player standing for the national anthem before Orlando’s game vs. the Nets.

After being the lone player to stand during the national anthem, Magic forward Jonathan Isaac explains how he came to the decision.

After he hadn’t played all season, Jamal Crawford was signed by the Brooklyn Nets as a replacement player for the seeding games. However, Crawford didn’t play in any of the Nets’ three scrimmages and was declared out for conditioning purposes on the team’s injury report heading into Friday’s game against the Orlando Magic. Crawford last played in the NBA on April 9, 2019, when he scored 51 points for the Phoenix Suns in a loss to the Dallas Mavericks — a game more notably remembered as the home finale for Dirk Nowitzki.

Jamal Crawford is unguardable beyond the 3-point line as he torches Nets teammate Rodions Kurucs in practice.

The non-ESPN games on Friday all feature teams playing for their playoff lives. The Orlando Magic entered the day a half-game behind the Brooklyn Nets for seventh, but the two teams traded spots after Orlando’s win. The Washington Wizards are chasing them, but their loss Friday dropped them six games back. The Wizards need to make up two games to force a play-in game in the East.

The game that started, and really, stopped, it all. After a four-month delay, the Thunder and Jazz finally play. When we left off, this game was about to be for the current 4-seed in the Western Conference. And it maintains those big implications as both teams are firmly in the mix for a top-four seed. It’s an important game — for a lot of reasons.

Both teams are 0-1 in the bubble, and in both cases lost tight, toss-up games. The Pelicans looked excellent, even with Zion Williamson‘s minute restriction — for about 3½ quarters. The Clippers did the same thing, except they just couldn’t find enough offense down the stretch. The Pelicans are more desperate than the Clippers here to get their first restart win, though, because there aren’t many chances available.

After beating the Clippers on opening night, the Lakers get the defending champs in another high-level matchup. There’s a lot of talk about how the already-great chemistry of the Raptors has only strengthened in the bubble, and while they’re an Eastern Conference threat, they’re still seen as somewhat of a dark horse. There’s an opportunity to make a strong statement here against the presumed title favorite.

The best and biggest moments from the NBA’s thrilling return

From player protests to renewed rivalries, our NBA experts react to the first night of restart action.

How to beat the Bucks: Three ways to topple this juggernaut

While the Bucks have the league’s best record, the reigning MVP and the top defense, these guys are beatable. Here are the three rules any contender will have to follow to take down the seeming juggernaut in Milwaukee.

The NBA bubble is a grand experiment in epidemiology

We’ll see how technology, policy and human behavior influence an epidemic — and what we can do to stop it.