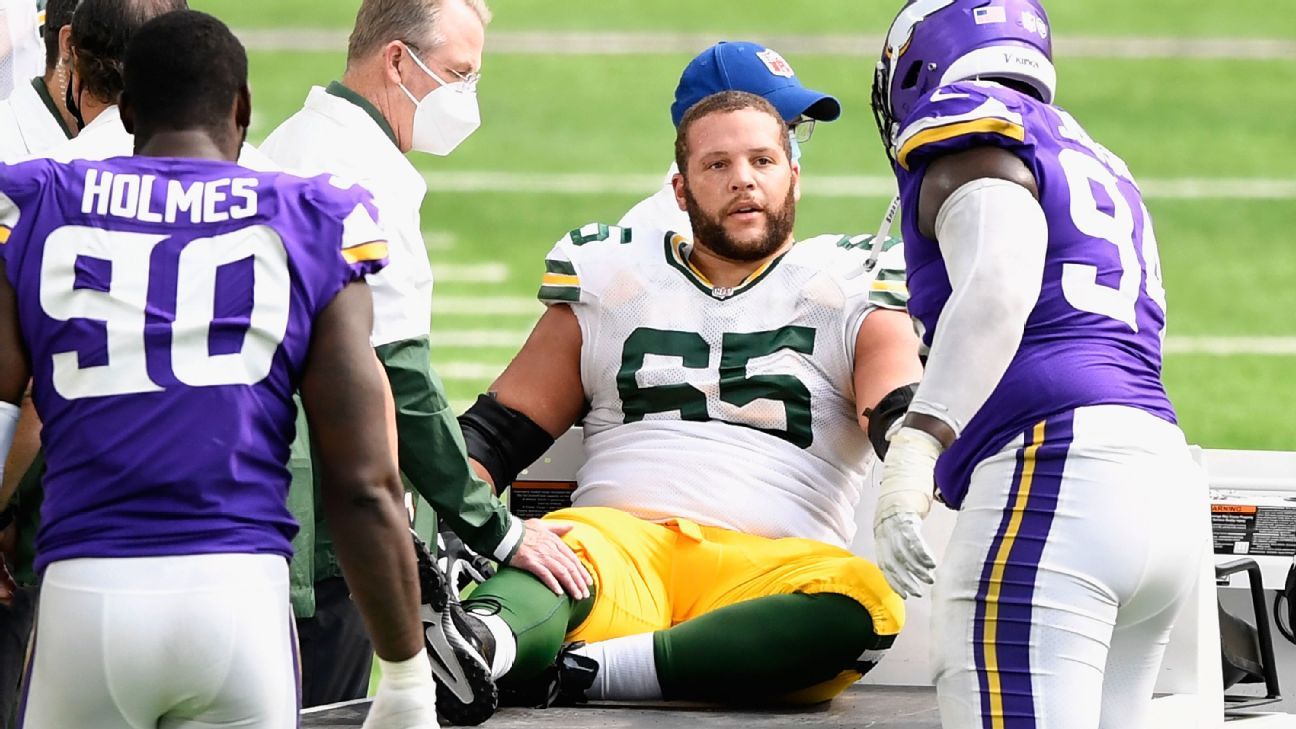 
GREEN BAY, Wis. — The Packers found a way to replace Lane Taylor after his season-ending biceps injury last season in Week 3, and now they will have to do it again. The hard-luck starting guard sustained a season-ending knee injury in Sunday’s season-opening win over the Minnesota Vikings.

The fear is that Taylor tore the ACL in his right knee and will need surgery. But either way, a source said he is done for the year.

“That’s my understand as well,” coach Matt LaFleur said of losing Taylor for the year.

“It’s significant, obviously. My heart goes out to him. Just battling back from the significant injury that he had last year and to get to a position where he was in our starting lineup, certainly he will be missed. I feel bad for him as an athlete, as a man. It takes a lot to come back from a significant injury and he put the time in and put himself in a great position to have a great year. It’s always tough to see when somebody goes down.”

If Turner can return this week from the knee injury he sustained in a training camp practice last month, he could return to right guard, where he played last year, but only if LaFleur is comfortable with Wagner at right tackle. Wagner played the final 46 snaps against the Vikings.

“I thought Rick did an outstanding job,” LaFleur said of the veteran who signed with the Packers this offseason. “I was really proud of him. I thought, again, as a whole, the offensive line did a great job. I know obviously Aaron wasn’t sacked at all and there was very few quarterback hits on him.”

Taylor, who first made the Packers as an undrafted free agent in 2013, is one of the longest-tenured and most popular offensive linemen in the locker room.

“My heart just goes out to him,” quarterback Aaron Rodgers said Sunday after the game. “He’s just a fantastic guy and what he went through last year to come back and then to have such a great training camp and to get banged up today was definitely tough to see, being a longtime friend of his. I’m proud of both Rick and Jon stepping in, really important to stay ready as a backup. We talked last night about how you’re one play away. A lot of guys in the room are one play away and you gotta be ready to go when your number’s called. So I’m proud of those guys stepping up.”

At least the Packers have options on the offensive line thanks to Jenkins’ versatility and the way Wagner and Runyan played off the bench. For Runyan, whose father Jon Sr. was a Pro Bowl tackle for the Eagles, it marked his first work at right guard after lining up most of training camp at left guard and playing mostly tackle in college at Michigan.

In spite of all the shuffling on the offensive line, the Packers totaled 522 yards of offense, and Rodgers threw for 364 yards and four touchdowns in the 42-34 win over the Vikings.

LaFleur offered no update on the status of Kenny Clark, their $70 million run-stopping defensive tackle who left the game in the second quarter because of a groin injury and did not return. The Packers play the Lions in Sunday’s home opener.

“I think you’ll find out later in the week with Kenny, and I really don’t know where we’re at with that right now,” LaFleur said. “But certainly losing a player of that caliber, it definitely doesn’t help you, that’s for sure. And I thought those guys, there were some good moments and then there were some moments where we didn’t do as good of a job, especially with some of our rush lane integrity.”