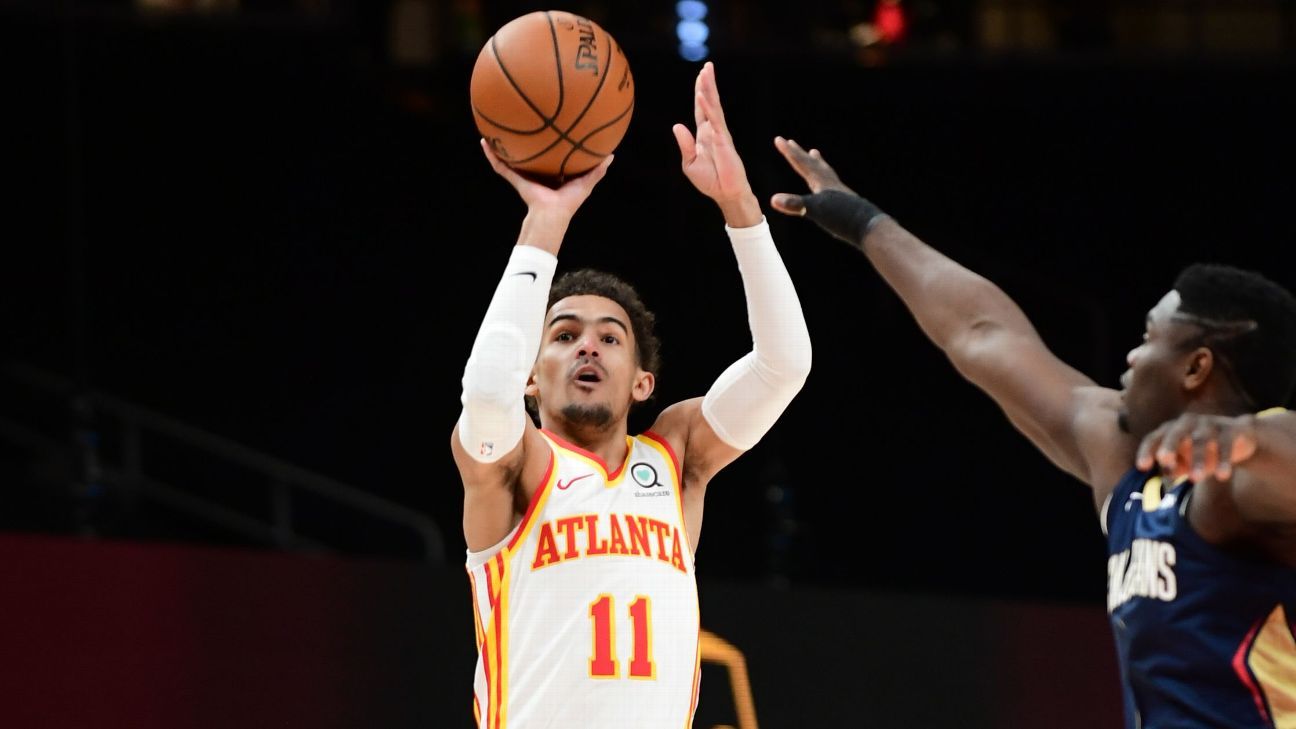 The 3-pointers just kept coming for the Atlanta Hawks in the third quarter Tuesday night against the visiting New Orleans Pelicans.

And as the Hawks kept launching, the shots kept falling.

When it was all said and done, Atlanta had hoisted 11 3-point attempts and hit every one, setting a record for most treys in a quarter without a miss, according to ESPN Stats & Information research.

“It really didn’t [feel like a record]; it just felt like we were out there playing and having fun,” Hawks guard Trae Young said after the 123-107 victory. “Whenever you’re doing that, whenever you’re just out there playing and having fun, things like that are going to happen. I didn’t notice in the game or whatever that we were on a roll like that. But it definitely felt like it for a second. We were just having fun.”

The previous mark for most 3-pointers made without a miss belonged to the Cleveland Cavaliers, who hit nine in the first quarter against the Hawks on Nov. 15, 2014.

Atlanta hit its ninth 3 against the Pelicans with 2:58 to go in the third quarter. Then Young connected on his second 36-footer of the quarter with 1:27 left, and Lou Williams ended the barrage with the 11th make with 34 seconds remaining.

“When guys are rolling, it’s kind of contagious,” said Young, who finished with 30 points while shooting 6-of-7 from deep. “It really is. That’s why when a couple possessions in a game when teams are swinging it around and it goes from one side to the other and then back to the other side, usually nine times out of 10, that guy is gonna hit a 3.

“Just because of the ball movement or just because of the momentum. When guys are hitting shots and hitting tough shots, it’s the same way. It’s contagious. Everybody starts doing it. That’s kind of what happened.”

According to ESPN Stats & Information data, Young made multiple 3s from at least 35 feet for the third time in his career. Over the past 25 seasons, the only other player to make multiple 35-footers in a game was Stephon Marbury.

Hawks guard Bogdan Bogdanovic, who was second behind Young with five 3s, said it was a game unlike any other.

“We had fun, honestly. It was really fun. Definitely the most fun we ever had this year. It was really fun to play that way. I think we all enjoyed it,” Bogdanovic said. “It started with our defense. Our aggressiveness both ways. We kept running the whole game. We didn’t slow down when we scored a couple of them. We didn’t stop. Most of the time, maybe we’ll stop and didn’t keep going. I think we got better tonight at that point.”

The defense was the main focus for Hawks coach Nate McMillan. The game was tied at 61 at halftime, and McMillan was fixated on that end of the floor.

“I’ll tell you the truth: I didn’t even know we were shooting the ball that well,” he said. “I was so focused on our defense. I thought we played soft in the first half. We were allowing those guys to run their offense as if it was 5-on-0 out there.

“We just wanted to turn up our defensive pressure in that third quarter. I thought we did that. It led to us being able to get out and get into transition and get into a rhythm on the offensive end of the floor.”

It helped, McMillan said, that the shots all seemed to come in a rhythm, and it certainly didn’t hurt that nine of the 11 3-pointers came off assists.

“If you’re playing your second, third, fourth option, a lot of times you’ll get wide-open shots. I’m assuming that’s where a lot of that came from. We had a good flow. We were moving the ball. We were just taking rhythm 3s. I didn’t feel like we were forcing anything. To be that hot and to knock down those shots, it was just one of those nights where the ball was going in the hole for us.”