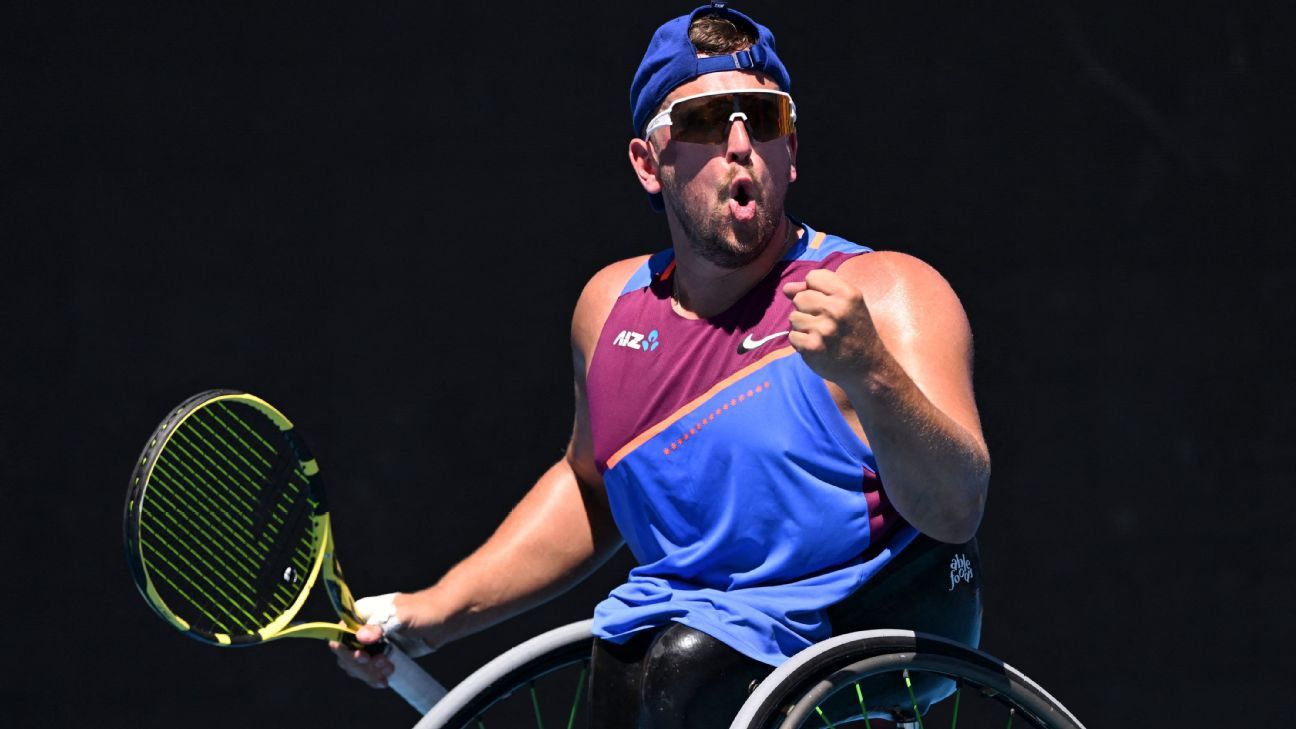 
MELBOURNE, Australia — When Dylan Alcott won his frist Grand Slam quad singles title at the Australian Open back in 2015, the final was played on an outside court with barely a few hundred people in the stands.

Thanks to the work of Alcott and a number of other disabled sports stars using their platform to promote and inspire change, these days, the final is on Rod Laver Arena in front of thousands – and has an audience of hundreds of thousands on television.

It’s a competition that has experienced almost immeasurable growth since players like Alcott started pushing and advocating for equality, and speaking to ESPN ahead of what will be his final Grand Slam, Alcott said he hopes wheelchair tennis’ next-generation of talent will continue to recieve the same attention and exposure after he’s gone – especially in Australia.

“Now I’m retired, I don’t want there to be a dip where wheelchair tennis goes back on the outside courts and no one cares. We don’t deserve that,” he said.

“The reason I am retiring is I think there are people who are ready to take that mantle, and keep breaking down those glass ceilings and keep pushing. Personalities, and being proud of their disabilities and stuff like that, and they’re ready.

“Even though I’m not on court, my purpose doesn’t change, because it’s not winning tennis tournaments, it’s changing perceptions for people with disabilities to live the lives they want to live.

“I’m just grateful that everyone got behind my ridiculous personality and stuff like that, because that’s why we had change and I’m proud of it.”

Alcott’s personality is infectious. He’s always upbeat, always happy to talk, always generous with his time. At this Australian Open, he’s zipped between commentary commitments, and playing – always with a smile on his face.

And he has a tennis achievement list that would make any current player not named Roger Federer, Novak Djokovic, Serena Williams or Rafael Nadal envious. Fifteen Grand Slam singles titles, two Olympic gold medals – he’s a tennis immortal. But as his pending retirement edges closer, it’s the achievements off the court of which he’s most proud.

“Not the awards, none of that. [But] like you saw on my social media, the post of a little kid who did the toss and we fist pumped. Then a tweet from a young woman called Hannah who is in a wheelchair who said, ‘I just can’t believe I’m seeing two people like me in prime time doing what they love’.

The reason we do what we do. Bigger than tennis ❤️💪🏼 #AusOpen pic.twitter.com/y9U67vmSVC

“That just didn’t happen when we were young. That stuff, that’s my purpose is changing perceptions so people with disability can live the lives they want to live.

“I’m not downgrading what tennis has done for me. It’s given me that platform to do it. I’m forever grateful.

“I love winning obviously, but it’s not everything to me. The other stuff means more, so I can actually enjoy when I play tennis.”

From a young boy who felt compelled to do something more meaninful with his life after being bullied for being in a wheelchair, to a Grand Slam champion, and now transitioning into the next stage of his life as a public leader, it’s undeniable that Alcott has used his tennis success to build a platform to shine a light on and lift up people with a disability – and he has created a legacy that is so much more than just filling seats in a stadium at a tennis match.

And after a career year in 2021, in which he won the coveted Golden Slam (every Grand Slam and the Paralympic gold medal), Alcott has decided it’s right to call time on professional sport so he can continue to build on the platform which has resulted in some incredible strides forward for people with a disability.

In 2017 he founded the Dylan Alcott Foundation, which offers disabled Australians mentoring, grants and scholarships so they can gain confidence and experience in life where they might not have been able to previously.

Not long after, and using his platform as a presenter on youth-oriented music radio station Triple J, he created Ability Fest – a music festival accessible to people with a wide range of disabilities.

It’s little wonder Alcott was named 2022 Australian on the Year on Tuesday evening. He’s been a voice — a big one — for disabled people not only across Australia, but the world over. Being named Australian of the Year is an honour he knows means a lot so many people given he’s the first disabled person to win the award in its 62-year history.

“Whenever I turned on the TV or the radio or the newspaper, I never saw anybody like me. And, whenever I did, it was a road safety ad where someone drink drives, has a car accident and what’s the next scene? Someone like me in tears because their life was over,” he said during his acceptance speech.

“I thought to myself, ‘That’s not my life’, but I believed that was going to be my life. But I’m so lucky that I had one of the best families, some of the best friends, my beautiful partner and my whole team who told me that I was worthy.

“I’m honestly so honoured … and it’s because of them and everybody in my life that I sit here as a proud man with a disability.”

And he already plans to be a big advocate for disables Australians, using his platforms to push vital funding for the National Disability Insurance Scheme (NDIS) among other things.

“People with disability have always been viewed as second-class citizens compared to non-disabled people,” he said earlier in the week. “It’s just an unconscious bias that people have.

“It’s always been there. We don’t get jobs, we don’t get asked on dates, we don’t get opportunities like other people because people think we can’t do it. I hope [the win] means a lot to a lot of people.”

Alcott understands and embraces he’s a role model – not just for disabled Australians and athletes, but for everyone. What he’s been able to do with the hand he was dealt is objectively inspirational.

“[Being a role model] comes easy to me, because I’m not trying hard. I’m just being me,” he told ESPN. “When I started being authentically me, everything started to change. Everyone thinks we’ve got to be someone we’re not, but we don’t.

“As soon as you are comfortable with who you are, you start performing better, your life gets better, your relationships get better – opportunities start coming. It just so happens I became a role model.

“I don’t try to be one, and I think that’s why people have got into the story – they’ve thought ‘I’ll get around that guy, he seems like he’s having fun and being himself’.

“But I am humbled that I am a role model for a lot of people, and that’s not going to change until the day I die.”

Regardless of Thursday’s result on the court, Alcott said he’s already achieved the ultimate win in his life – discovering his purpose.

“Of course I want to win (the final). I keep saying I don’t care, but of course I do. My life will go on if I don’t. I need to keep telling myself that. Just enjoy it, have fun, play your best and we’ll see what happens,” he said.

“The biggest achievement for me is just being a happy bloke. My purpose is not winning gold medals and tennis matches.”