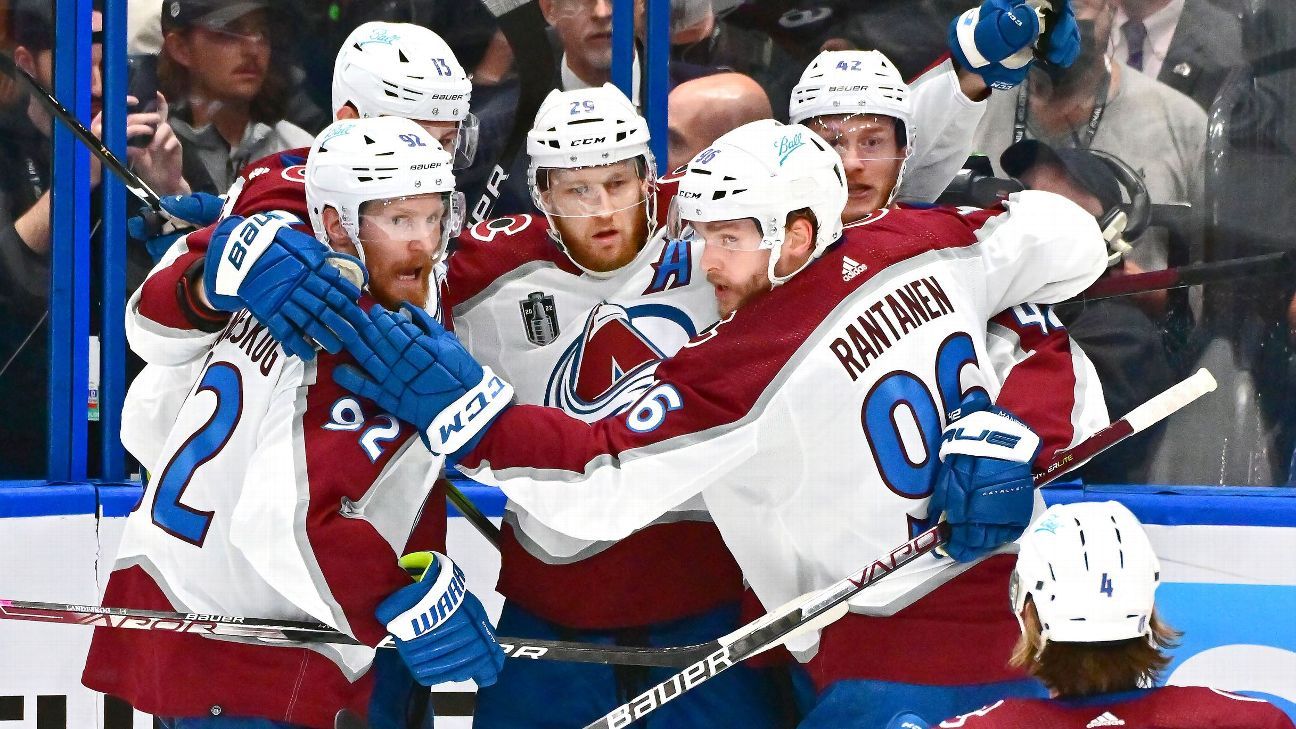 The two-time defending champion Tampa Bay Lightning staved off elimination against the Colorado Avalanche in Game 5, largely due to late-game heroics from Ondrej Palat.

Now, the series is back on the Bolts’ home ice at Amalie Arena.

Despite coming off its second loss in a potential series-clinching game this postseason, both of which have come at home in Game 5s, Colorado remains in control of the series with a 3-2 lead.

History is on the Avalanche’s side, as teams that held a 3-1 lead in a best-of-seven Stanley Cup Final are 35-1 all-time.

Across the ice, Tampa Bay is no stranger to playing with its back against the wall. The team is 4-0 in potential elimination games over the past three postseasons, including 3-0 in the 2022 Stanley Cup playoffs.

The Lightning still have a somewhat steep mountain to climb as they seek to join the 1942 Maple Leafs as the only teams to erase a 3-1 series deficit in the Stanley Cup Final.

Here are the best sights and sounds from Sunday night at the potential series-clinching Game 6.

Colorado’s star forward knotted the game with his second marker of the Cup Final (and first not off his own skate) and 13th of the postseason to pass Evander Kane atop the playoff field.

It was also MacKinnon’s 41st playoff goal, the most ever by an Avalanche player through the first 30 postseason games of his career.

Boy, did the Avalanche need MacKinnon to get going. Anthony Cirelli’s line with Brandon Hagel and Alex Killorn has done a marvelous job limiting his chances. Until Mikko Rantanen banked a power-play shot off MacKinnon’s boot in Game 4, MacKinnon had only a pair of assists in the series.

While MacKinnon had pledged not to let frustration boil over, it was clear earlier in the first period (via some bench door slams) that he was beginning to lose that battle. MacKinnon has great speed but was being repeatedly stymied by the Lightning’s smothering defense and aggressive stick-checks.

Colorado knows well by now that Tampa Bay won’t quit coming. A resurrected MacKinnon gives the Avalanche inarguably their best chance at holding on for a win. — Kristen Shilton

Another game, another Avalanche goal with which the Lightning bench took issue.

Nathan MacKinnon’s goal at 1:54 of the second period that tied Game 6 for the Avalanche came on a delayed penalty for the Lightning. The Tampa Bay bench thought that forward Nick Paul had possession of the puck in front of goalie Andrei Vasilevskiy. No gripe here — Paul certainly did. The problem is that the puck was off his stick by the time the referee at center ice had his arm up. The Avalanche kept it in the zone, and eventually MacKinnon scored the goal to get them back into the game.

“We thought on the delayed penalty [Paul] skated out with the puck. We feel it should have been blown and it wasn’t. That was our opinion, but it’s in the net so that doesn’t really matter anymore,” said Lightning coach Jon Cooper on ABC.

We’ve got a tie game

And just like that, we’re all tied up in Game 6 after Nathan MacKinnon finds the net for the Avs less than two minutes into the second period. MacKinnon’s 13 goals this postseason are tied for second most in Avalanche playoff history.

Way to kick it off, Nate 👊#GoAvsGo pic.twitter.com/iN3fBYJAwF

One period down for the Lightning

It’s astonishing how the Tampa Bay Lightning have turned around their fortunes at the start of games. The first two in Denver were a chamber of horrors: misplays, bad penalties and multigoal deficits in both of those losses. The Lightning swore if their starts were better, they were confident in their “recipe” to defeat the Avalanche. They’ve been proved right since then.

Getting the lead was something Colorado coach Jared Bednar hoped for before Game 6.

“It would be nice to get a lead. We’ve had success obviously in this series when we’ve jumped out to a nice lead. For them, I think it just gives them the confidence with their goaltender, their defensive structure to be able to kind of try and lock things down a little bit more without having to press to score,” he said. “The lead is big and I think the start to tonight’s game is going to be really important.”

That it was … except in the Lightning’s favor. The question is whether they’ll regret not doubling that lead given how active they were offensively in those first 10 minutes. — Greg Wyshynski

What was Cale Makar thinking?

The reigning Norris Trophy winner took an interference penalty 23 seconds into Game 6, just as Colorado was coming out with good offensive zone pressure to start the night.

The generally composed defender looked sheepish heading for the box, and perhaps rightfully so. To give Tampa Bay momentum off the hop in its building facing elimination was the exact opposite of what Makar would hope to do. Even though the Lightning failed to score on the power play it still put the Avalanche’s stars on the bench and Tampa Bay on the attack.

And not long after the sides returned to even strength, Steven Stamkos did score the game’s opening marker. Again, you don’t want to let the Lightning get rolling.

Then later in the period, as Colorado tried to hold an exhausted group of Lightning hemmed into their own zone, Makar fumbled around with the puck so much that the Avalanche were forced out. Another uncharacteristic play.

Those little moments add up this late in a series. Scoring has been at a premium for Colorado ever since Andrei Vasilevskiy settled into Game 3. A freebie of any sort is catnip to Tampa Bay and won’t get the Avalanche out of Florida with the Stanley Cup in tow. — Kristen Shilton

Tampa Bay wasted no time finding the back of the net on its home ice. The Lightning were the first on the board for the third straight game thanks to captain Steven Stamkos.

Back to Tampa Bay

The Lightning have a tall task ahead of them, but if this hype video — and their perfect record in elimination games over the past three postseasons — is any indication, they’re up for the challenge.

One shift at a time. ⚡️ pic.twitter.com/9xWFfR5B0Y