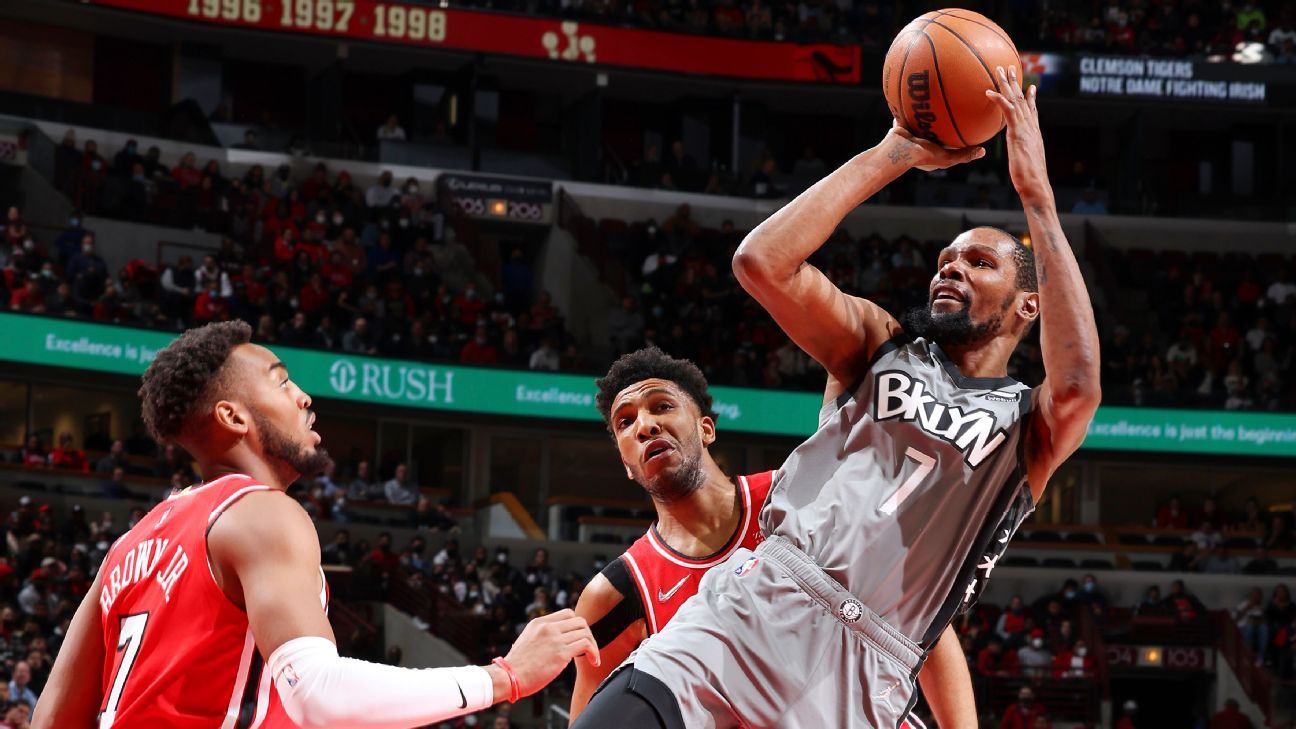 
CHICAGO — The Brooklyn Nets left no doubt about just how good they can be when Kevin Durant, Kyrie Irving and James Harden are playing together in Wednesday night’s 138-112 demolition of the Eastern Conference-leading Chicago Bulls.

“We’re that good,” Harden said, when asked whether he was surprised at how quickly the trio’s chemistry has come together. “We got a chance to be that good. We just haven’t had enough of it. I think last year we probably had 15 games maybe together, a little more, a little less. And this year only two. We haven’t had a real bulk of a season — y’all can consistently see how great we can be. And we’re working on that. We need to get to that point.”

While Harden acknowledged that even he isn’t sure just how much better the trio can be, he is confident they will develop even more cohesion as the Nets work Irving back into the fold.

“We just got to do it,” Harden said. “Since I’ve been here it’s been crazy, a lot of ups and downs, honestly. From last year coming into this year, we haven’t had any consistency for any reason but … we’re not far at all. We’re all killers. We attack. But we’re all unselfish. We like to just make the right play. So it won’t take long at all. We just got to be out there on the court and be out there doing it.”

The Nets came into this game with an 0-8 record against the top four teams in the Eastern and Western conferences. Their 39-19 outburst in the third quarter broke open the game and was the most they had outscored any opponent in one quarter all season.

“You definitely want to play great against the best teams in the league for sure,” Durant said. “Especially after losing last game, we wanted to bounce back no matter who it was against. But it’s good to come in here and a tough environment and get a W. This team has been extremely hot lately … you can feel it, [fans] are starting to understand that Chicago Bulls basketball is back, so for us to come in here and win in this fashion, it meant a lot to us.”

Durant noted that he believed the key for the Nets was being locked in on the defensive end, which has been an issue for the team over the past few weeks. With Irving back — after the Nets reversed course last month and allowed him to return to the team despite the fact he’s not vaccinated against COVID-19 — the Nets’ confidence is suddenly sky high again. Irving didn’t waver in the belief that the Nets could still be a serious title contender despite the fact that he can play in only most road games because of New York City’s vaccination mandate.

“We had an unbelievable resolve I felt like all night,” Irving said. “We were in that flow where it gets dangerous for other teams or our opponent.”

Harden is still holding out hope that Irving will be able to play in home games at some point in the season.

“I’m going to give him the shot,” Harden said with a smile.

In the short term, Nets coach Steve Nash left open the possibility that Durant and potentially a few other veterans might sit Thursday night as the Nets complete their second back-to-back of the week against the Oklahoma City Thunder. In the long term, Wednesday offered another glimpse of just how great the Nets can be when their stars are clicking on all cylinders.

“These games can definitely give a team confidence,” Nash said. “Give ’em mojo and something to build on, but it can also not. So it’s in the bank. We’ve shown that we can perform this way, we’ve shown the type of spirit and energy we can bring to the game, the purpose. Now we got to build on it. … We raised our level. We competed. We rose to the occasion, and now we move forward and hopefully it is a moment in time that helps us get to another level.”