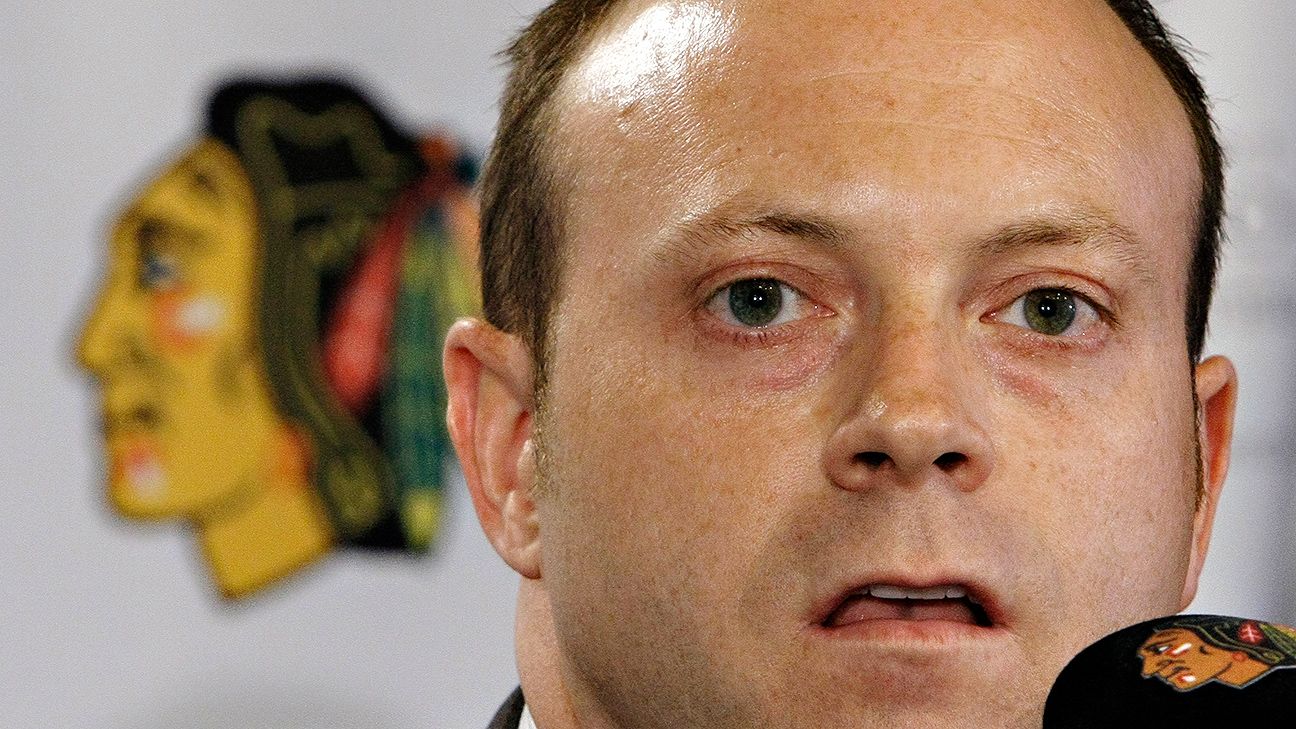 
Chicago Blackhawks general manager Stan Bowman believes his team has “a ways to go” before it can sustainably win again — and he’s not afraid to use the word “rebuild.”

“But what I don’t want it to mean is we’re trying to tear this team apart and trying to bring in a whole new group of players in the next year and a half,” Bowman told ESPN in a wide-ranging interview on Monday. “But we do need to rebuild the depth of our team. We don’t have enough players, top to bottom, to compete with the top teams. We’ve got a lot of good players, we’ve got a pretty good start on the makings of a good team, but we still have a ways to go yet, and I accept that.”

On Tuesday, the Blackhawks released a letter to season-ticket holders addressing their direction.

“We’re committed to developing young players and rebuilding our roster,” the letter read. “We want more than another window to win; we want to reach the summit again, and stay there — an effort that will require a stockpile of emerging talent to complement our top players.”

According to Bowman, it isn’t a pivot but rather an extension of the Blackhawks’ objective over the past two seasons. “Most of the things that are discussed in the letter, we’ve been doing them anyway,” Bowman said. “We just haven’t been super forthright with the fact that we’re doing them.”

The commitment to transparency comes after a transformative offseason in which the Blackhawks parted with forward Brandon Saad and goalie Corey Crawford, whom the letter describes as “a pair of popular, two-time champions.” Chicago made the moves despite upsetting the fifth-seeded Oilers this summer in the NHL’s extended postseason tournament to qualify for the playoffs. The Blackhawks were knocked out of the first round by the Golden Knights.

In an interview with The Athletic last week, captain Jonathan Toews said he was surprised by the offseason moves.

“I’ve never been told that we were going through a rebuild,” Toews told The Athletic. “That has never been communicated to me, for that matter. A lot of this comes as a shock because it’s a completely different direction than we expected.”

Bowman himself was caught off-guard by Toews’ comments. The GM said he talked to his captain about the team’s approach throughout the season, as well as in Toews’ exit meeting.

“I think what’s assumed in that comment is a little bit of misunderstanding because I have talked to Jonathan since then; I’ve talked to all the veterans,” Bowman said. “I’ve tried to explain that the direction of the team — we’re on the same path that we were on last year. There’s really no change in direction. We’re being more honest about it. And if anything, we’re going to double down on investing even more in our young players. The direction is not something that is a sea change for us.

“Maybe the concept that everything is changing, that is something he was having a hard time wrapping his mind around? I don’t want to speak for him, I’m just guessing. I think maybe that’s where there was a disconnect. In reality, there wasn’t a huge transformation in the team. Our team will continue to invest and develop young players over the next one year, two years, three years, so we can surround Jonathan with a better supporting cast to take some of the load off his shoulders. Because it’s hard for a couple guys to carry that load.”

Toews, Patrick Kane and Duncan Keith — who helped the team to three Stanley Cups between 2010 and 2015 — are under contract through 2022-23. Brent Seabrook, also part of the championship nucleus, is on the books through 2023-24. All four players have no-movement clauses.

Bowman said he has never asked the players to waive their trade protection, nor have they come to him saying they weren’t happy about the team’s direction and wanted to find a new situation.

“That’s not the approach we’re expecting to take,” Bowman said. “I don’t know if that’s going to happen down the road, I guess we’ll tackle that if it happens. But right now, I didn’t get the feeling from any of them that that was their desire.”

The GM said it was an organizational decision to send the letter to fans on Tuesday, with the hopes it could help fans better understand what they’re seeing on the ice — especially the inevitable bumps along the way, with young players struggling, entering and leaving the lineup, and getting demoted to the minors.

According to Bowman, Zadorov is a player Chicago had previously coveted but was told was unavailable. Zadorov, who has 356 games of NHL experience, is a physical, 6-foot-5 defenseman who Bowman said would pair well with two of Chicago’s top prospects — Adam Boqvist and Mitchell, who are both right-handed, on the smaller side and offensively minded.

The Blackhawks also have a young coach in 35-year-old Jeremy Colliton, who took over for Joel Quenneville in 2018.

“I think Jeremy is a very important piece of this,” Bowman said. “His strength as a coach is that element — the development of young players, and taking raw materials and molding them into pieces.”

Colliton is entering the final year of a three-year contract, but Bowman said the team is “most likely” looking to extend the coach before the season.

Still, Bowman understands change can be hard — both for veterans on his team and the fan base.

The Blackhawks let Crawford, who had been the starting goaltender for a decade, walk in free agency. Crawford signed a two-year, $7.8 million deal with the Devils and told reporters he was “devastated” when the Blackhawks said they were going in a different direction. Chicago is instead relying on a trio of youngsters who were already in house — Collin Delia, Kevin Lankinen and Malcolm Subban, who have started a combined 76 NHL games.

The Blackhawks were adamant about offering Crawford only a one-year deal.

“One year was important because Corey is not going to be the goalie of the future for us, he was a short-term solution,” Bowman said. “As we talked it through, [Crawford’s agent] was like, that’s not that interesting to us. It wasn’t really an adversarial conversation. The more we talked about it, the term was important to us. We have these three young goalies who are all around the same age that Corey was when he first came into the league. It was really the flexibility of a one-year deal was important to us, just like a two-year deal was important to Corey. There’s nothing more than that. There’s no side stories or back stories or any issues with it. It just didn’t work out.”

Saad, 27, was entering the final year of his contract, worth $6 million per season. The Blackhawks traded Saad to the division rival Avalanche as part of a four-player package.

“He’s been a great Blackhawk two times over,” Bowman said. “He’s zero-maintenance. He’s reliable, he’s consistent. But as we look forward, we’re probably not going to allocate that money to that position. We weren’t going to be re-signing Brandon next summer. You could just use him all year and let him go at the end of the year, [but] that’s not very good asset management. We could either keep him and trade him during the season or the deadline, but there’s inherent risks with that.”

Chicago typically spends to the salary cap, and Bowman said he has not received any edicts from ownership about curbing spending as they transition to a younger roster. That said, Bowman said he is hoping to get the team’s payroll and cap situation “in a better place” with “more cushion.”

“I want the flexibility so we can bring in a good player in his mid-20s, who is signed but makes too much money for that team,” Bowman said. “We can swoop in and say, ‘We can take him off your hands for relatively nothing.’ We’re not really in that mode yet, but that’s the motivation for working on our cap differently. It’s not because Rocky [Wirtz, the Blackhawks’ owner] doesn’t want to spend money. We’ve been one end of the transaction, where we are offloading good players, getting little in return. I’d love to take advantage of other teams. That will accelerate our progress to become a top team again.”