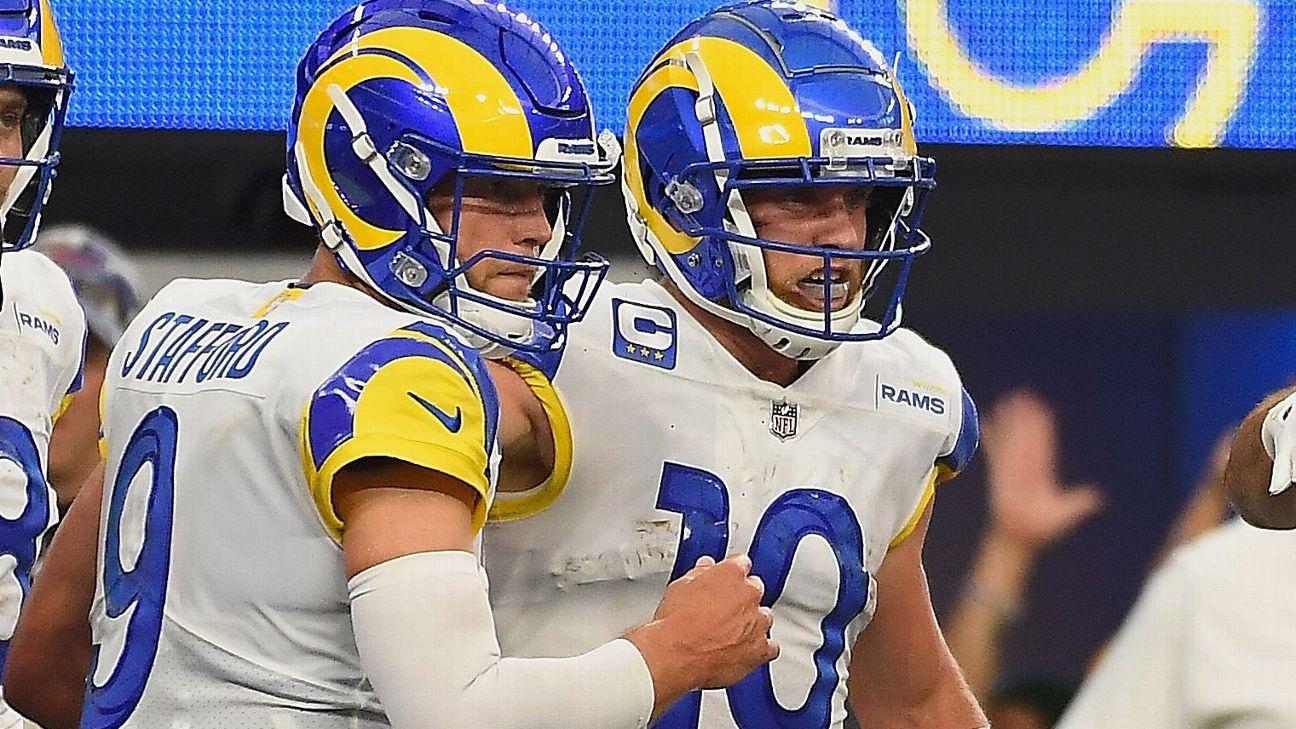 
THOUSAND OAKS, Calif. — After winning Super Bowl LVI in February, the Los Angeles Rams kept most of their core together, including extending quarterback Matthew Stafford and wide receiver Cooper Kupp.

But there were several changes on the offense — bringing in wide receiver Allen Robinson II and shuffling the offensive line — and through three games, the Rams (2-1) are still trying to find a rhythm.

“I think we’re just continuing to learn our identity,” coach Sean McVay said. “It’s really figuring out how to best utilize a lot of moving parts that are different then what we’ve had in years past.”

The Rams rank 18th in Football Outsiders’ offensive DVOA so far this season, 16th in passing and 14th in rushing. None of those rankings are startling after three weeks, but all will need to improve if the Rams want to be competing beyond January.

Los Angeles is also unexpectedly without wide receiver Van Jefferson, who needed knee surgery during training camp. The Rams put him on injured reserve before their 20-12 Week 3 victory over the Arizona Cardinals, so he will miss at least the first six games of the season.

So what hasn’t changed?

The Rams are still utilizing their now-trademark 11 personnel on 97% of plays. And the offense still goes through Kupp.

According to ESPN Stats & Information, Kupp’s target share, which was 32% in 2021, is 35% through the first three games. He also accounts for 43% of the Rams’ catches and 37% of the team’s receiving yards. He ranks in the top three in the NFL in all three categories.

Kupp has a league-leading 28 catches for 280 yards and three receiving touchdowns this season and ran for a 20-yard touchdown against Arizona. He has the most receptions through three games in his career.

One big difference is Stafford, who has played fine to start the season but not to last year’s level. According to Pro Football Focus, Stafford is 3-for-11 for 72 yards, no touchdowns and an interception on throws 20 or more yards down the field.

Also worrying for Stafford is that he threw all five of his interceptions in his first two games of the season.

Stafford had a couple big plays that didn’t connect — barely — against the Cardinals, so there are signs that he’s close to breaking through. His performance in Arizona wasn’t going to win him the MVP, but he didn’t commit a turnover and completed 72% of his passes. The most encouraging stat from Stafford’s performance was a season-high 9.96 yards per attempt.

But his coach says he’s not concerned about what the numbers say.

“I thought he played a really clean game,” McVay said of Stafford’s performance against the Cardinals. “I thought he had great command, great control, thought he saw the field incredibly well. … He does so many things that maybe even don’t show up on the stat sheet that are such a great reflection of what a stud he is. [I’m] really pleased with his overall performance. There were a couple plays that not many people in the world can make.

“I think what we’ve realized, especially over the last couple weeks, is that the stats don’t even begin to tell the total story.”

One reason for the lack of downfield success is a lack of production from Robinson, who the Rams gave a guaranteed $30 million in the offseason to be the go-to receiver opposite Kupp. Robinson only had 410 receiving yards in 12 games last season for the Bears. A change of scenery was necessary, but he only has seven catches for 88 yards through three games this season. He has one touchdown but dropped another at the goal line early against the Cardinals.

Of players with at least 10 targets this season, Robinson ranks in the bottom third in average separation, according to NFL Next Gen Stats. His 58.33 catch percentage is also in the bottom half, and he has a minus-0.5 average yards after catch above expectation.

They need Robinson to step up with limited options right now. There have been many hints about Odell Beckham Jr. — who had seven touchdown receptions in the second half of the season and the playoffs last year before tearing the ACL in his left knee in the Super Bowl — eventually being re-signed, but he’s unlikely to be ready to play until December.

“There are different ways to be able to move the football and score points, and that’s really all I care about,” McVay said. “I’m not necessarily worried about how we’re creating explosives as long as we’re efficient moving the football and scoring points. I think those things are there for the taking over the last couple weeks. We’ve just got to be able to execute better in some of those particular scenarios that I just alluded to.

“I do believe that we’re capable of it and now we got to go do it.”

Against Arizona, it was running back Cam Akers who sparked the offense, running five times on the Rams’ second touchdown drive near the end of the third quarter. He ran for 61 yards on 12 carries, most of which came in the second half.

McVay felt like the Rams should have been able to score more than 20 points against Arizona based on the drives the offense put together. If the Rams could have more success in the red zone — they were 1-of-3 — the team would be happier with the final score.

“I think over the last couple of weeks there’s been some efficiency,” McVay said. “I thought there were a couple more explosives [against Arizona], and I thought the theme of the day was really just finishing those drives in the red area. Where if we end up scoring 30-plus points we’d probably feel a little bit better, but we didn’t. How do we really fix that? How do we make sure coaches and players alike we’re all on the same page and we kind of just clean up things.

“The margin for error is small, and we’ve got to do a better job with that.”