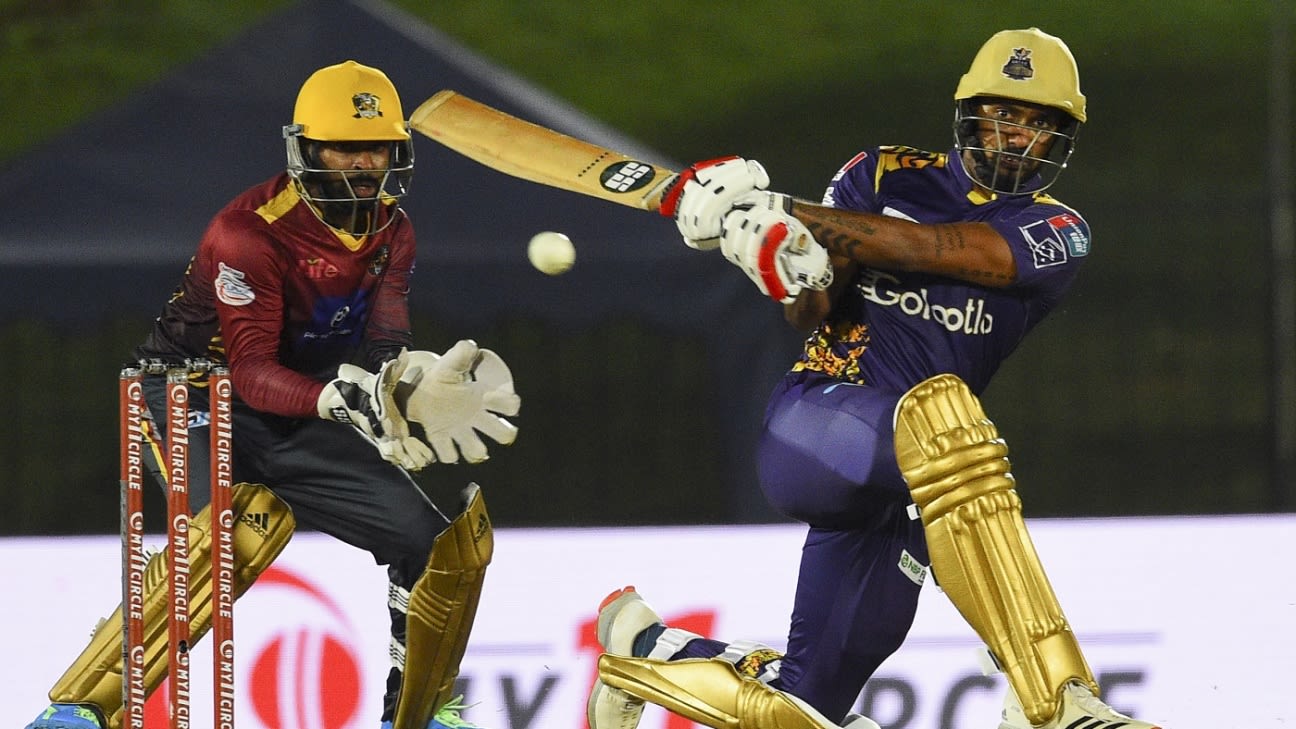 How the game played out

The Dambulla Viiking withstood game-changing innings from Danushka Gunathilaka and Azam Khan, as well as a host of dropped catches, to eventually secure a hard-fought nine run win – their fourth win of the tournament – and with it a place in the semi-finals of the Lanka Premier League.

Having been set an imposing target of 208, at 47 for 2 in the sixth over, the Gladiators were in danger of falling behind a required rate that was already quite steep.

Enter Azam Khan, whose 24-ball 55 would transform the entire innings, as the Gladiators, who had been second-favourites for much of the game, were all of a sudden looking the side likelier to pull off a win.

Khan and Gunathilaka would put on 94 together, though it wasn’t a stand without its moments of peril, with Gunathilaka and Azam dropped twice and once respectively. Had those catches been taken at the first time of asking though, the game would not have been nearly as close an affair.

For the Gladiators, the result, which is their fifth consecutive defeat and one which sees them rooted to the bottom of the table, will be particularly worrying in the context of their seeming inability to impact the game with the ball.

At no point in the Viiking innings were they put under any sort of pressure by the Gladiators’ bowlers, with the 110-run opening stand between Niroshan Dickwella and Upul Tharanga coming with neither batsman required to undertake any real risk.

And by the time Dickwella fell, midway through the 13th over, the platform was set for Dasun Shanaka – who rarely needs an invitation to attack – to have free rein. Shanaka would continue his rich vein of form, smashing a 21-ball 37 to propel the Viiking past 200.

While his team remains rooted to the bottom of the table, captain Gunathilaka is peaking the heady heights at the top of the tournament top-scorer charts. The most distinctive feature of Gunathilaka’s batting is his uncanny ability to split the field; while other batsmen focus on clearing the fielders in the deep, Gunathilaka takes pleasure in dissecting them with forensic precision.

The big difference for the Gladiators from their previous games was that Gunathilaka was finally provided substantial support at the other end. Azam’s 55 came at a rate comfortably beyond 200, as he utilised a combination of his powerful frame and deft wristwork to grab the momentum – that had until that point been firmly in the Viiking camp – and, more importantly, give Gunathilaka the freedom to play at his own pace.

For the Viiking, the big positive would have been the return to form of Dickwella. With several of his national team-mates having already cashed in with big scores, it wouldn’t be surprising if Dickwella’s 50 runs across four games had left him with a minor case of FOMO. A 37-ball 60 later however, he will be feeling much better about himself, though it owed as much to the Gladiators’ lack of penetration as it did to Dickwella hunkering down and playing more percentage cricket – he attempted, uncharacteristically, just one scoop all innings. But seeing how effective this new approach proved, the Viiking will be hoping for more of the same for the rest of the tournament.

Anwar Ali bowling the penultimate over of the Gladiators chase. With 21 required of 12 balls, and Gunathilaka at the crease, the odds were in the Gladiators’ favour. But Ali would call upon every ounce of experience to give away just four runs, while picking up the crucial wicket of Gunathilaka – despite having dropped him once already in the over.

Gunathilaka was dropped thrice, once each at the start of the 11th and 13th overs, and then incredibly once more in the penultimate over of the game. While the first was an admittedly tough chance, smacked flat and hard to Ashen Bandara at deep midwicket, the second was not as easy to forgive, as Ramesh Mendis running in from deep square leg spilled a slog-sweep that was miscued high into the air. The final drop though looked to have been the most painful of the lot, Ali missing a skied return catch in the penultimate over of the game, but he would get his man two balls later to ensure the Viiking would ultimately not pay for their lax efforts in the field.

Where the teams stand

With the Viiking joining the Jaffna Stallions on eight points, and bottom side Gladiators now only able to get a maximum of six points, both the Viiking and Stallions have become the first side to qualify for the semi-finals. For the Gladiators, they need to start winning and also hope results go their way, with their game against the Kandy Tuskers likely to be a play-off of sorts.