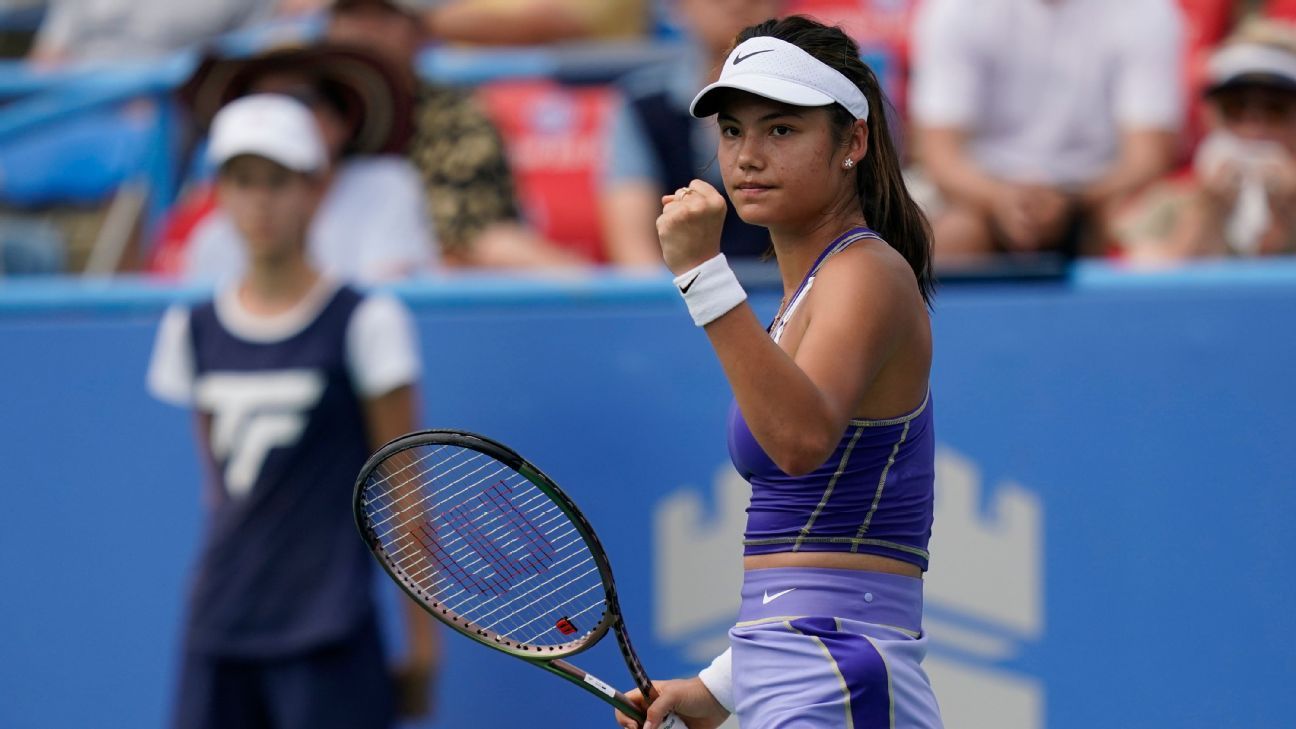 
WASHINGTON — Reigning US Open champion Emma Raducanu found herself completely exhausted, physically and mentally, after playing a pair of tiebreakers across nearly three hours on a hot and humid afternoon at the Citi Open on Thursday.

“Everything,” the second-seeded Raducanu said afterward, “was tired.”

Still, she managed to reach her second quarterfinal of the season by edging Camila Osorio 7-6 (5), 7-6 (4) with the temperature in the 90s, getting done just before a thunderstorm hit the area, suspending play in other matches at the hard-court tournament.

“It’s flooding pretty bad,” Raducanu said during her post-match news conference. “You could probably find a mermaid or something.”

She dealt with blisters on her racket-wielding right hand and took a medical timeout late in the second set. Osorio was visited by an athletic trainer earlier.

“A pretty monumental effort to really get through that,” Raducanu said. “I’m just really pleased and proud of how I dug in when … it mattered.”

Her only other quarterfinal appearance in a dozen tournaments in 2022 came back in April on red clay at Stuttgart, Germany, where she lost at that stage to No. 1-ranked Iga Swiatek. This time, Raducanu will face 60th-ranked Liudmila Samsonova for a berth in the semifinals at the tuneup for the US Open, which begins on Aug. 29.

Raducanu, the British player who won the title at Flushing Meadows as a qualifier a year ago at age 18, kept giving away leads against Osorio, a 20-year-old from Colombia.

Raducanu was up 3-0 at the match’s outset, then needed to get through a tiebreaker to pull out the opening set. She served for the match at 5-4 in the second, but got broken there thanks to three double-faults and a forehand into the net.

Still, Raducanu again was better in the tiebreaker, closing out the victory when Osorio sent a service return wide. Raducanu, who has lost in the second round at each of this year’s major tournaments, dropped her racket and covered her eyes with both hands.

After the players met for a hug at the net, Raducanu appeared to be too exhausted for a full wave to the crowd on what Yoshihito Nishioka called a “crazy hot day” after he beat seventh-seeded Karen Khachanov 7-6 (2), 7-6 (1).

Nishioka now meets Dan Evans in the quarterfinals. Evans advanced when third-seeded Taylor Fritz — the highest American man in the rankings — stopped playing in the third set because of he was fatigued.

Fritz later took to social media to explain what happened, saying he had been dealing with a foot injury since Wimbledon that prevented him from doing the type of fitness work that typically prepares him for conditions like he faced Thursday.