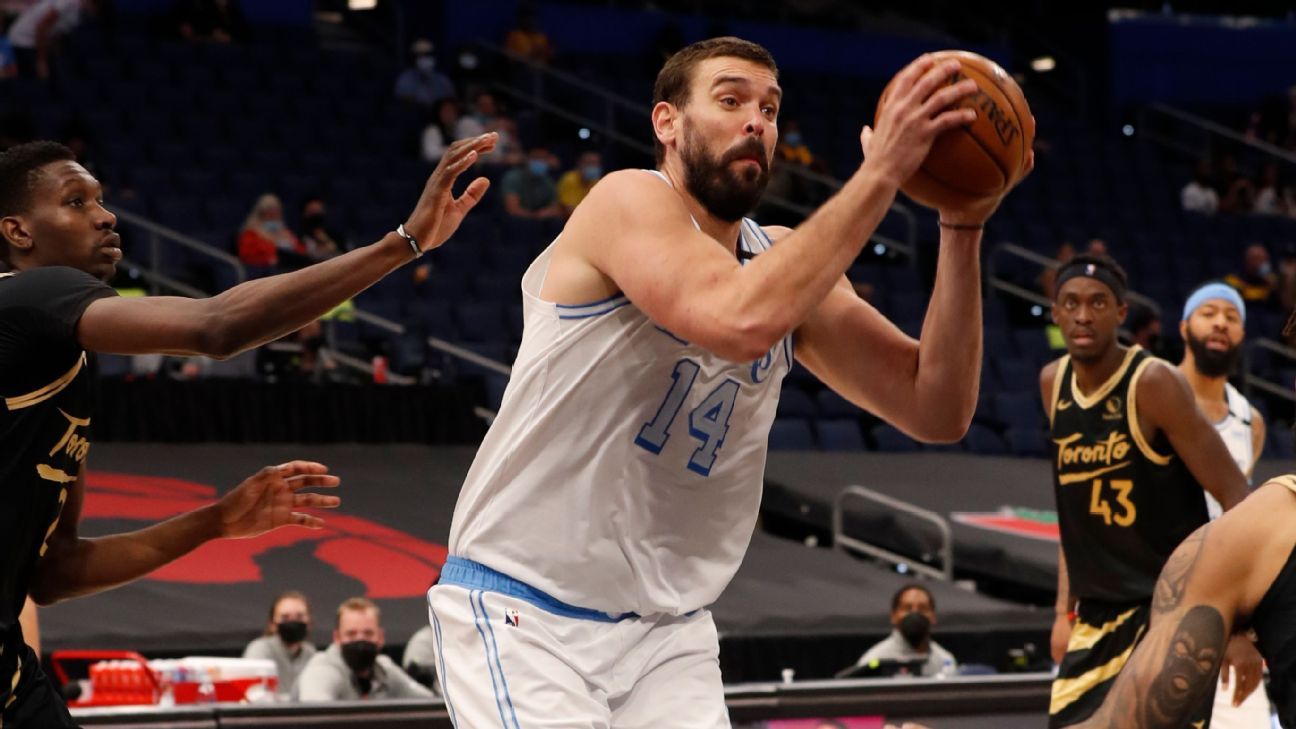 
Marc Gasol might have just turned in his best effort since joining the Los Angeles Lakers in Tuesday’s 110-101 win over the Toronto Raptors, but L.A. coach Frank Vogel remained resolute: Andre Drummond is the team’s starting center.

“No, we’re going to start Andre. That’s what we signed him here for,” Vogel said. “We need to get [Drummond] a ton of minutes to get him acclimated to our system with only X amount of games before the playoffs, and he’ll be our starter. … [Gasol’s performance] doesn’t change that.”

Vogel made his remarks after being asked if Gasol’s performance Tuesday gave him anything to reconsider. Gasol had a season-high 13 points and tied his season highs with nine rebounds and four blocks, helping the Lakers build a 34-point lead.

Gasol, who initially balked at a role change, telling reporters last week that Drummond’s addition was “a hard pill to swallow,” was fully on board with the idea of making room for the buyout market addition after the Raptors game.

“I’ll stay ready. I’m going to tell you this: I’m fully committed to the team. I’ll stay ready when my number is called,” Gasol said. “I understand we have to get Andre acclimated to what we’re trying to do. We have to get back our two main guys — Bron [LeBron James] and AD [Anthony Davis] whenever they come back — and they have to get that group going and get some chemistry going with the first unit for them. I’ll be ready no matter what happens. No matter if it’s five minutes, 10 minutes, if it’s whatever position. If it’s some nights, I might not play. But I’ll stay ready, no matter what. I made that commitment.

“It’s been a process for me to reassess this situation a little bit, but like I said, I’m fully committed to this team. So, whatever is thrown at me, I’ll be ready.”

Drummond has missed the Lakers’ past three games since his debut because of a bruised big toe and torn toenail on his right foot. Vogel said Drummond participated in L.A.’s practice in Tampa Bay, Florida, on Monday but still was experiencing some “tenderness” in his toe before the Toronto game.

“We’re hopeful he plays against Miami,” Vogel said of Drummond, looking ahead to the Lakers’ next game on the schedule, Thursday against the Heat.

Vogel insisted that “all three of those guys” — Drummond, Gasol and Montrezl Harrell — that play center for L.A. will be needed as the team makes its march towards the postseason in hopes of defending its championship.

As for Gasol, who has averaged 9.7 points on 60% shooting, 7 rebounds, 4.3 assists and 1.7 blocks in the last three games that Drummond missed while the Lakers went 2-1, the 36-year-old provided a reminder of what he has left in the tank.

“You know, I can make a couple shots. I can play in the post. I can pass the ball,” he said. “I can do a couple things quite well every now and then.”