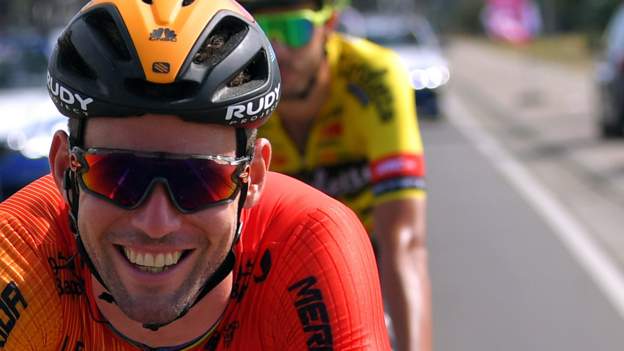 
Mark Cavendish says he feels like he is “coming home” after rejoining Deceuninck-Quick Step for 2021.

The former Team Sky rider has won 30 Tour de France stages across a glittering career, but has struggled for form in recent seasons.

He had hinted he would quit the sport at the end of this season.

During a tearful post-race interview at the Gent-Wevelgem classics race in October he said: “That was perhaps the last race of my career.”

But he said that re-signing for the team, which has stars such as Julian Alaphilippe and Remco Evenepoel, “genuinely feels like I am coming home”.

“I can’t wait to start working again with the staff, most of which were here during my first spell,” he said.

“Even with an extremely difficult and disrupted season this year, they have shown how strong and unified they are and I am hoping to add to even more. I can’t wait to be back in the Wolfpack.”

It is not yet clear what role Cavendish will play for the team next year, but he could target sprint-stage victories in Grand Tour races – such as the Tour de France and Giro d’Italia – to try to add to his tally of 30 wins and overhaul the long-standing record of 34 Grand Tour stage victories held by legendary Belgian rider Eddy Merckx.

Cavendish, who also won road racing’s World Championships in 2011, had struggled at Bahrain-McLaren this season and had been affected by the Epstein-Barr virus before this year.

Signing for one of professional cycling’s strongest teams demonstrates how highly rated he remains within the sport.

On Saturday, Cavendish – who also won the 2009 ‘monument’ Milan-San Remo classic – posted a picture on social media alluding to his transfer.

England mull changes to pace attack with Olly Stone in contention for recall
Olly Stone admits previous career doubts as he prepares for recall
Angelo Mathews: 'Felt like I was playing against Stuart Broad in England'
Rajasthan Royals trade Robin Uthappa to CSK in all-cash deal
2020 NFL season in review