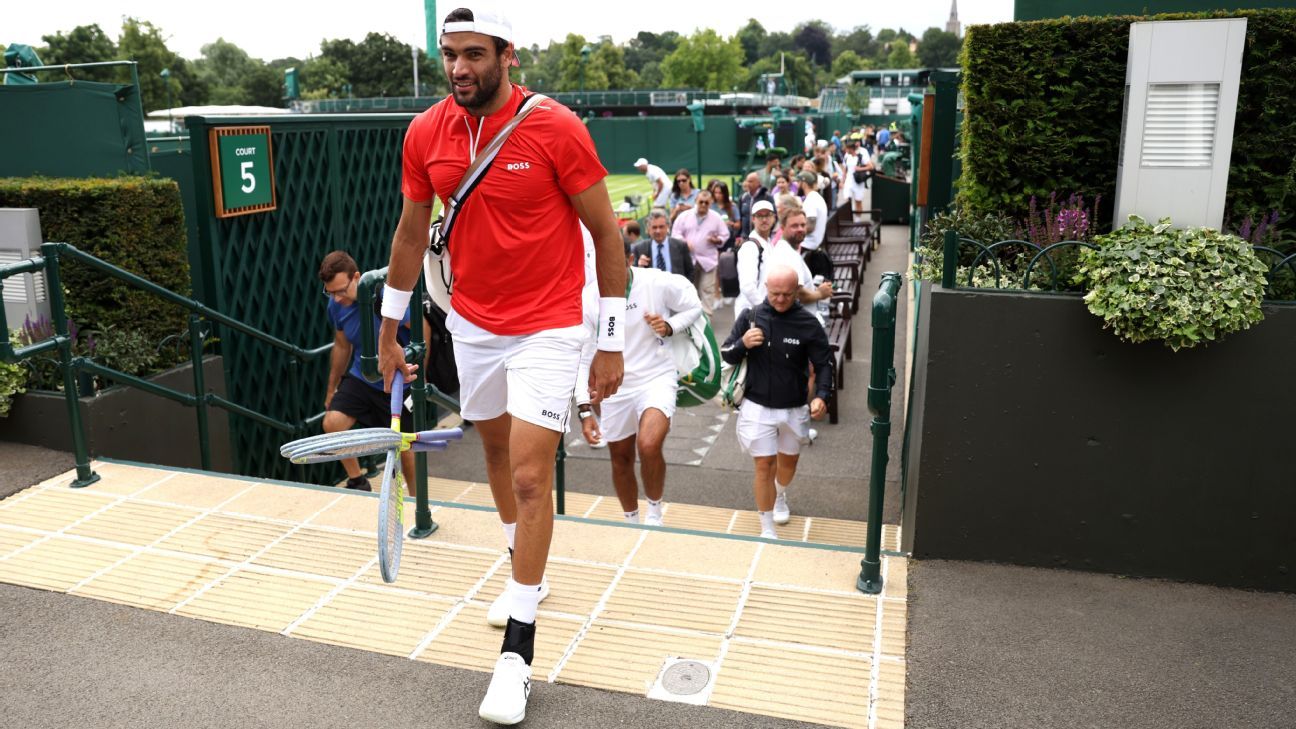 WIMBLEDON, England — Matteo Berrettini, last year’s runner-up at Wimbledon, dropped out of the grass-court Grand Slam tournament hours before he was scheduled to play his first-round match Tuesday, saying that he tested positive for COVID-19.

The All England Club announced Berrettini’s withdrawal, and he posted about it on Instagram, saying that he was “heartbroken” and has been isolating “the last few days” after experiencing flu-like symptoms.

He’s the second high-profile player to pull out of the draw within the first two days because of the illness caused by the coronavirus, joining 2014 U.S. Open champion and 2017 Wimbledon finalist Marin Cilic.

After being canceled in 2020 because of the pandemic, then setting up a bubble-type environment and restricting attendance in 2021 to try to prevent the spread of COVID-19, Wimbledon has returned to normal in every way, with no mask-wearing requirement, full crowds and the famous Queue back in action.

“Despite symptoms not being severe, I decided it was important to take another test this morning to protect the health and safety of my fellow competitors and everyone else involved in the tournament,” Berrettini wrote in his post, which included a black-and-white photo of him hitting a serve at Wimbledon.

“I have no words to describe the extreme disappointment I feel,” he said. “The dream is over for this year, but I will be back stronger.”

Berrettini was supposed to play 44th-ranked Cristian Garin in the first round on Tuesday. Berrettini was replaced in the field by Elias Ymer, who lost in qualifying but now will take on Garin.

Berrettini was considered a title contender for Wimbledon, both because of last year’s run to his first Grand Slam final at the All England Club before losing to Djokovic — and because of his recent form on grass.

“I mean, he is definitely (one of the) top two, three players in the world on grass in the last three years. I mean, his results are testament to that,” Djokovic said on Monday about Berrettini. “Probably, this is his favorite surface. For his game, it’s the most suitable surface. So there is a lot of expectations on his side that he should go far in this tournament.”

The 26-year-old Berrettini, who relies on big serves and big forehands, won two tuneup tournaments on the surface this month, going 9-0 at Stuttgart, Germany, and Queen’s Club in London.

That was how he returned to action after being sidelined since March because of an operation on his right hand.

In all, since the start of 2019, he is 32-3 on grass. Two of those three losses came against six-time Wimbledon winner Djokovic and eight-time champion Roger Federer.

Another player left the tournament Tuesday when Danka Kovinic withdrew because of a lower back injury. She was replaced in the field by Lesley Pattinama Kerkhove, who faces Sonay Kartal.