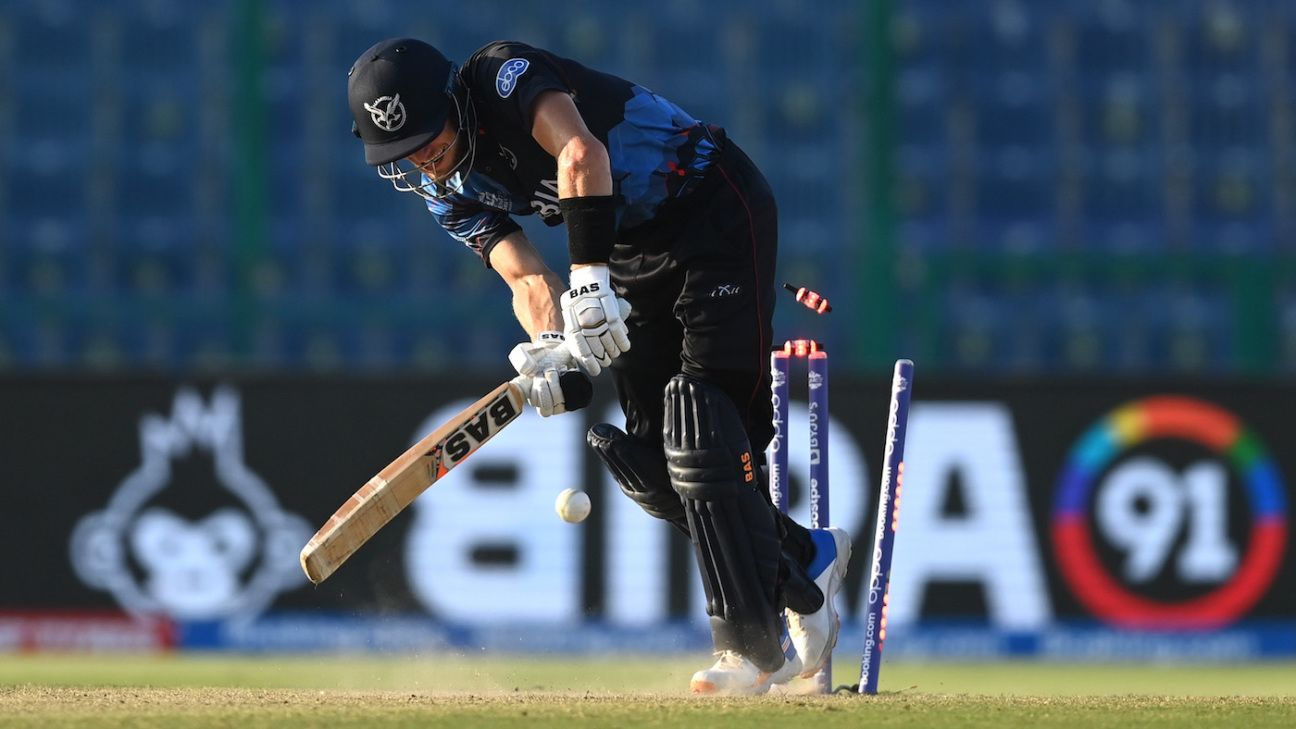 After notching up three successive wins against Netherlands, Ireland and Scotland, Namibia couldn’t quite keep up with Afghanistan’s intensity on Sunday, losing by 62 runs. It is only going to get tougher for them as they next run into group-toppers Pakistan, followed by India and New Zealand, in three different venues across six days. Namibia’s head coach Pierre de Bruyn admitted as much after they were pinned down to 98 for 9 in a chase of 161 in Abu Dhabi.

“We are definitely looking forward to them,” de Bruyn said at the post-match press conference. “We’re fully aware that it’s going to now get really tough. We just don’t want to be a team that’s just going to rock up and provide middle practice. We want to continue competing and we need to sharpen up our skills and we need to believe.

“Today was maybe an icebreaker for us as a team – experiencing this level of intensity. So, we haven’t got a long turnaround – one day of rest and training and then we’ve got to come and face the heat.”

“Yeah, it was always going to be difficult. You’re [up] against top players,” de Bruyn said. “We had a plan – we had a game-plan in how to approach that powerplay – it was all about no damage. The moment you lose four [three] wickets in a powerplay, you’re behind and if you look at our dismissals, every batter will go and say that they got themselves out. [There were] one or two good yorkers on the day that the batter can say ‘that was a good ball’. But we know we’ve been here long enough to know that on these wickets you’ve got to play straight and we’ve learnt some dear lessons.”

Loftie-Eaton, though, had a good outing with the ball earlier in the afternoon. He got some balls to turn big and others to skid off the pitch, keeping the Afghanistan batters guessing. He was rewarded with the wickets of Rahmanullah Gurbaz and Najibullah Zadran – both trapped lbw. Curiously enough, the legspinner had bowled just one over in four matches prior to the Afghanistan fixture. de Bruyn revealed that an injury was limiting his bowling in this tournament.

“It was about managing Nicol leading-up to game-time,” de Bruyn said. “He had a quad strain – tear two – so you know it was tough. He wasn’t ready on tour, so we need to get him bowling fit in the nets first and what he’s shown today is that he’s ready. I’m so pleased for him and that’s a huge positive for us. He’s a confident player, he’s a youngster, so that’s a very big positive for the bowling unit itself. I thought we executed good plans today. The moment we didn’t execute we were punished and I suppose those are good lessons.”

de Bruyn also acknowledged Asghar Afghan‘s contribution to the game after the 33-year old ended his career with 31 off 23 balls in a crucial victory for Afghanistan.

“It’s inspiring everyone out there. He’s had a fantastic career,” de Bruyn said. “Am sure every cricketer in the world would like to finish his career on a high note like he’s done today. So, congratulations to him for what he’s done for cricket. For global cricket and especially for Afghanistan cricket.”

Deivarayan Muthu is a sub-editor at ESPNcricinfo