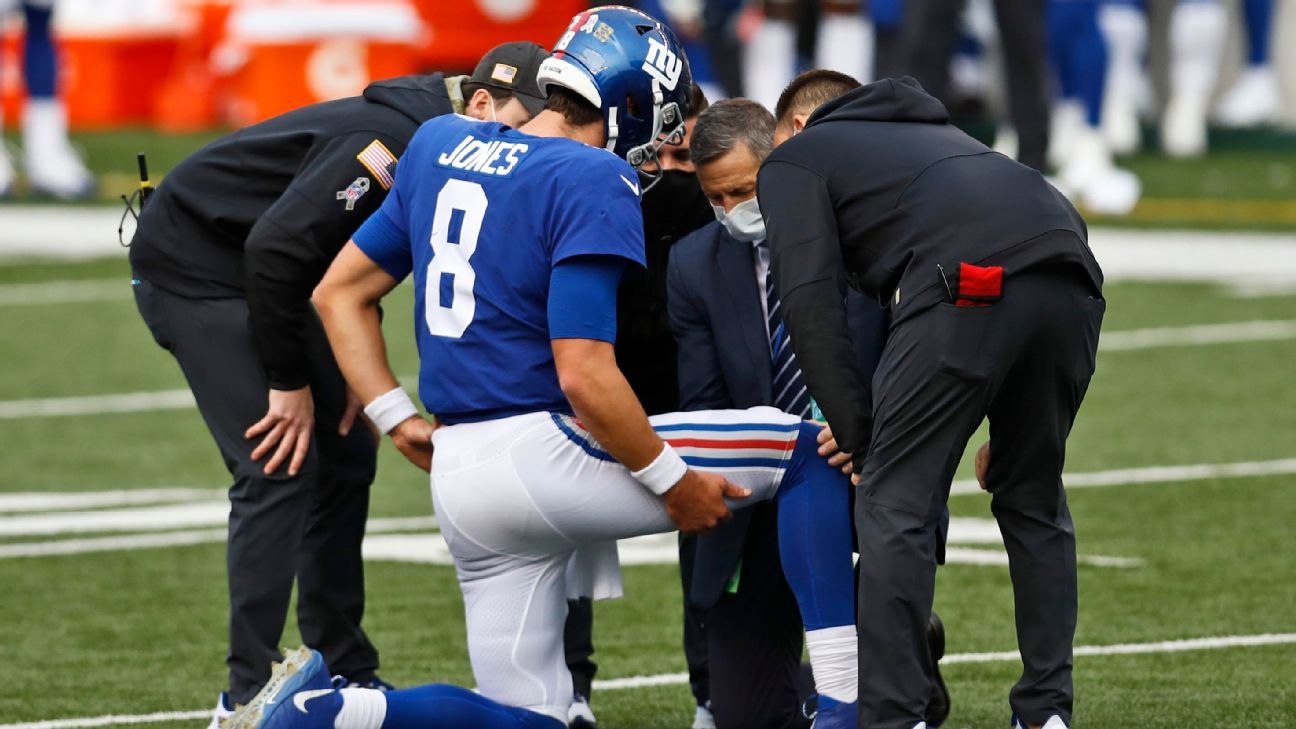 
New York Giants quarterback Daniel Jones suffered a hamstring injury in the third quarter of Sunday’s 19-17 victory over the Cincinnati Bengals that could force him to miss some time.

A source told ESPN the initial belief is that it’s a “pretty bad” hamstring injury. More tests are scheduled Monday to determine the full extent of the injury.

Colt McCoy took Jones’ place as the Giants held on for their third straight win, leaving them tied for first place in the NFC East with the Washington Football Team. The Giants (4-7) are essentially in first place — at least until the Philadelphia Eagles play on Monday night — since they have already beaten Washington twice this season.

But Jones’ injury comes at perhaps the most inopportune time. The Giants are entering their toughest stretch of the season. They play in Seattle next Sunday in their first of four consecutive games against teams with a winning record.

The Giants haven’t beaten a team with a winning record this season.

Jones said after the game he’s going to take it day by day with the hamstring. This is unlike any injury he has ever had before. He added it is “tough to say” at this point if it is going to be a long-term injury.

Coach Joe Judge was taking an optimistic view after the win.

Yeah, I would say I’m optimistic [about next week] at this point right now. Now I don’t want to go ahead and say ‘Yay’ or ‘Nay’ because I don’t have the medical information at this time,” Judge said. “So, again, once he talks to the doctors and we get the information, I’m sure he’s going to try everything he can.

“But I am optimistic just knowing what he’s played through before and how he’s handled different things. Again, I have to be fair to the player. I don’t know how he feels physically. I don’t know what the severity of the injury is. So I have to make sure I have that information. Obviously we don’t want to put any player on the field if they can’t properly defend themselves or compete.”

Jones was injured at the end of a 7-yard run early in the third quarter. He briefly reached for the back of his right leg while on the ground, but remained in the game. Two plays later, Jones could hardly drop back and made an awkward third-down throw while limping. He went to the ground and again grabbed at the back of his leg, before being taken off the field and being sent to the medical tent for treatment.

Jones returned the following drive for two plays after being cleared by trainers. After limping onto the field, he threw one pass before being removed from the game. He was unable to drive the ball as his leg clearly was a major problem.

“Yeah, just felt it on that play and didn’t feel like I could get a lot on it really or do what I needed to do to be effective and move the ball and throw it accurately,” he said. “Just look to rehab it, do whatever I can to heal it up as fast as I can.”

The Giants were tied 10-10 with the Bengals when Jones left the contest. They settled for a field goal several plays after he exited.

Jones was playing some of the best football of his career prior to the injury. He was 16-of-26 passing for 213 yards before hurting his leg early in the third quarter. His stats would have been even better had it not been for a dropped deep pass by wide receiver Darius Slayton and a costly fumble by tight end Evan Engram in the first half.

Jones entered Sunday having completed 62.5% of his passes this season with eight touchdowns and nine interceptions. But he hadn’t committed a turnover in consecutive games for the first time in his career entering the matchup with the Bengals. He didn’t commit a turnover in the first two-plus quarters against Cincinnati either.

McCoy did just enough to allow the Giants to escape with the victory. He completed 6 of 10 passes for 31 yards with no touchdowns and no interceptions.

Scott Jamieson leads in Abu Dhabi as Colin Morikawa, Rory McIlroy struggle
Auburn football promotes Jeff Schmedding to DC after Derek Mason steps down to pursue other opportunities
Tampa Bay Buccaneers QB Tom Brady says he plans to spend a lot of time with family to figure out his future
What to know about 2022 Baseball Hall of Fame vote
Francis Ngannou says UFC threatened to sue agent for allegedly having talks with Jake Paul’s business partner