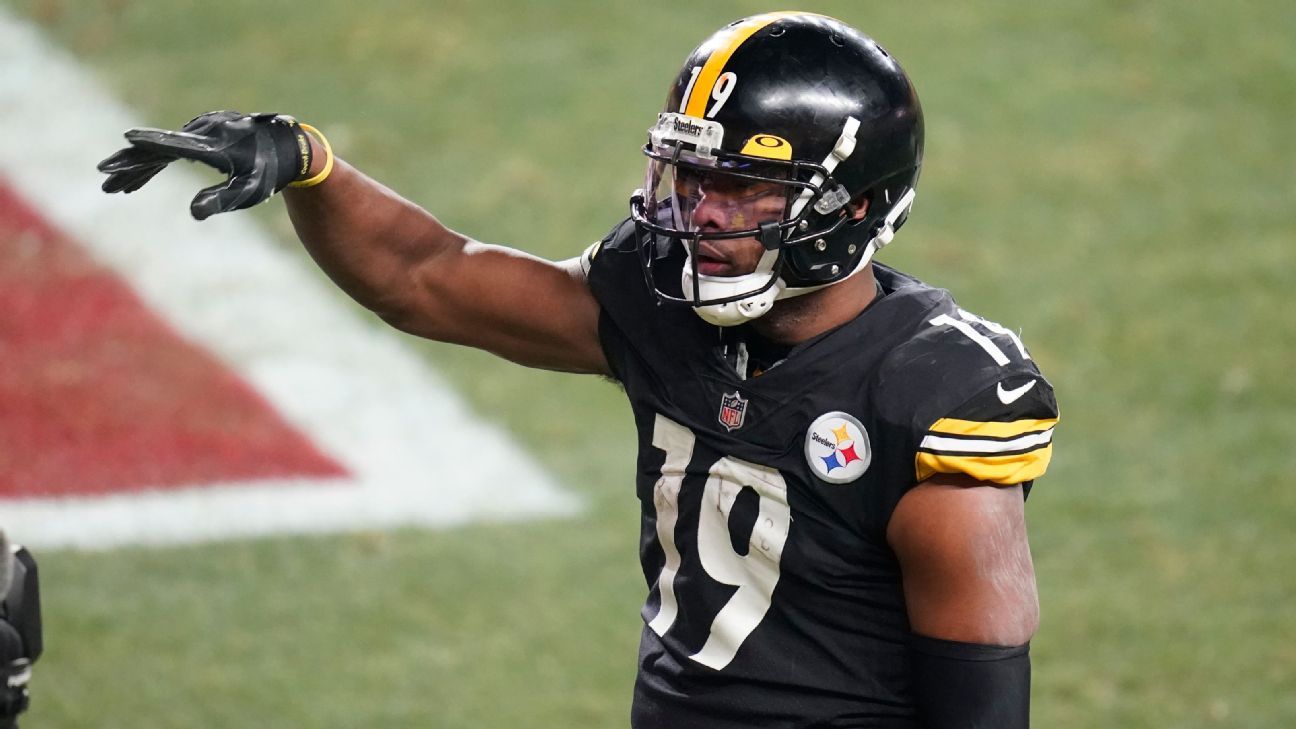 
PITTSBURGH — Diontae Johnson wasn’t quite sure what to make of JuJu Smith-Schuster in the Pittsburgh Steelers‘ locker room before practice. For the first time in three months, Smith-Schuster was suiting up, pulling on his cleats and pads at the UPMC Rooney Sports Complex practice facility after the Steelers designated him to return from injured reserve on Thursday.

“Had no clue about it,” Johnson said after practice. “I was surprised to see him in the locker room. I was like, ‘Yo, you getting ready or something?’ Putting on these cleats. I’m happy he’s back. If he gets a chance to play, I’m going to be excited for him, seeing him do what he do, which is make plays. I’m sure everybody misses him doing his dances and everything out there.”

Smith-Schuster participated in Thursday’s practice, and while coach Mike Tomlin was scarce on the details of Smith-Schuster’s participation, Johnson gave an encouraging review.

“To me, it looked like he was ready,” Johnson said. “He’s got to ease himself back into things, but he looked smooth today.

The Steelers have 21 days to activate him to the active roster, and Tomlin didn’t rule out the possibility of Smith-Schuster playing against the Kansas City Chiefs on Sunday.

“I don’t know that,” Tomlin said when asked if his wide receiver could play Sunday. “We just started the 21-day window. What transpires out here and a lot of other questions are part of the equation.”

The team also activated wide receiver James Washington from the reserve/COVID-19 list, and coach Tomlin gave an update on running back Najee Harris (elbow), saying the rookie is scheduled to return to practice Friday. That participation will be “telling” for Harris’ availability Sunday.

Smith-Schuster has been on IR since Oct. 16 after he suffered a shoulder injury against the Denver Broncos in Week 5 and had surgery later that week.

After that surgery, Smith-Schuster posted on social media that he would be out the rest of the regular season, but speaking with ESPN last month, he acknowledged there was a chance he could return this season.

“AFC championship or the Super Bowl,” Smith-Schuster said Dec. 7 when asked if and when he could return. “Either one works for me.

“There’s a percentage that I could possibly come back and participate in [the AFC championship]. That’s where I’m at right now. I’m rehabbing as much as possible every day, just trying to get after it. You just never know.”

At the time, Smith-Schuster put the percentage of him returning at 5%, but with the Steelers opening the practice window, it appears odds are greater that he could play again this season.

“He’s worked hard in rehabilitation and gotten himself to this point,” Tomlin said. “We simply started the 21-day window. We’ll look at him, see how he feels. Check his level of conditioning when people get into that 21-day window. … Good to have him out here, but that’s part of the process.”

Smith-Schuster, 25, has just 15 catches for 129 yards in his injury-shortened season. Since Smith-Schuster went out, Ray-Ray McCloud has filled his role as a slot receiver, snagging 39 catches for 277 yards.

“He brings back that positive energy that he’s always had, that he always brings,” Johnson said. “You want to bring back a guy like that, who’s all about football, all about his teammates. Just doing everything for the team. He’s a people person, too. There’s never a dull moment when he’s around.”

Smith-Schuster is set to be a free agent again in the offseason after returning to the Steelers on a one-year deal for the 2021 season. But he told ESPN that he’s not ruling out staying in Pittsburgh.

“Because I’ve done it already, I know what it feels like,” Smith-Schuster told ESPN in December of free agency. “I think mentally, I’ll be totally fine. It’s a brand-new market. There’s more money involved, more cap space available, especially the Steelers being one of the top teams. As of right now, we’re not talking to anyone. We’re going to let it play out in March and February.