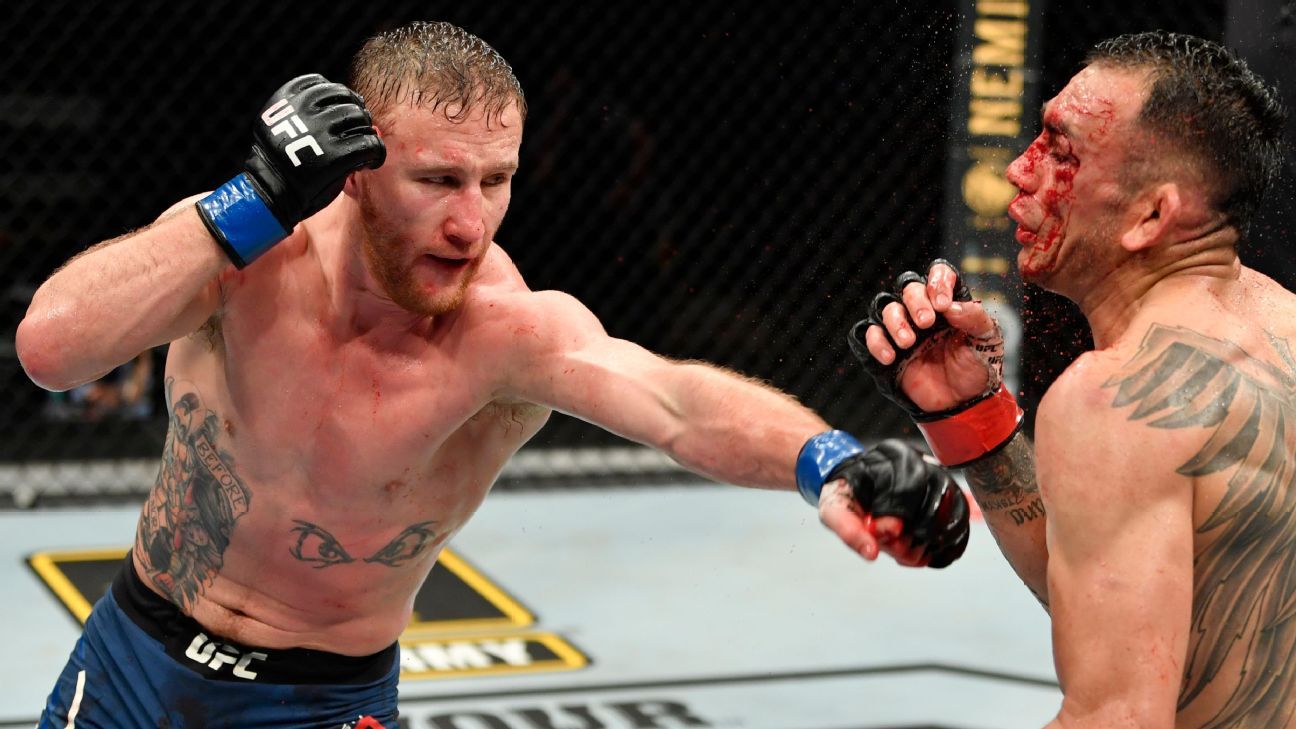 
The wait will soon be over for UFC fans eagerly anticipating the battle between interim lightweight champion Justin Gaethje and world titleholder Khabib Nurmagomedov. The popular fighters are set to meet Saturday at UFC 254 on “Fight Island” in Abu Dhabi.

Gaethje will rely on power strikes and athleticism in attempting to hand Nurmagomedov (28-0) his first loss. Gaethje also must be ready to slow the relentless pressure that Nurmagomedov brings with wrestling, takedowns and the ability to dominate his opponents by pushing them to the side of the cage and controlling the action.

The UFC 254 main event will feature one of the most highly anticipated fights of the year, with interim lightweight champion Justin Gaethje meeting world champ Khabib Nurmagomedov. Gaethje has won four straight, including three first-round finishes, while Nurmagomedov (28-0) looks to remain undefeated. Middleweights Robert Whittaker and Jared Cannonier will square off in the co-main event.

And what if Gaethje wins? Could there be a callout of a certain popular former champion?

Will Cannonier, who is ranked fifth in ESPN’s divisional rankings, keep rising with his fourth straight win, or will Whittaker solidify his spot as the division’s No. 1 contender?

Real or not: Justin Gaethje will bring to an end one of the most dominant runs in MMA history on Saturday

Justin Gaethje has earned a fight night bonus each time he entered the Octagon. Check out the best moments that have him fighting for the interim lightweight title. Order UFC 249 here on ESPN+ espn.com/ppv.

Raimondi: There’s no tougher matchup for Nurmagomedov in the UFC lightweight division than Gaethje. That distinction was once reserved for Tony Ferguson, but Gaethje’s dismantling of Ferguson at UFC 249 in May was eye-opening. This is not the same Gaethje who lost to Eddie Alvarez and Dustin Poirier earlier in his UFC run. His evolution has been incredible under coach Trevor Wittman. The reckless, free-wheeling Gaethje is gone. He’s just as aggressive as he has ever been, but Gaethje is now technical and tactical to go along with it. Gaethje uses his aggression as part of his strategy now, rather than it being a potential albatross. He doesn’t put himself in harm’s way nearly as much. Gaethje is truly one of the most dangerous and violent strikers in MMA.

The longer Gaethje remains on his feet against Nurmagomedov, the better. In a pure stand-up battle, Gaethje wins. But that is a tall task. Nurmagomedov is arguably the best MMA wrestler ever. No one imposes his will on a fight better than the UFC lightweight champion. Everyone knows he will wrestle and no one is able to stop it. Gaethje was a Division I All-American wrestler and has exceptional takedown defense. It’s just difficult to foresee anyone containing Nurmagomedov’s wrestling and grappling at this point. In a five-round fight, Nurmagomedov is going to get his foe down eventually. And when he does, he usually either does damage or works for a submission.

One of the big questions is how will Nurmagomedov’s wrestling affect Gaethje’s striking? Will the threat of the takedown take away some of Gaethje’s effectiveness in kickboxing? It’s a possibility — just ask Conor McGregor, whom Nurmagomedov dropped with an overhand right when they fought at UFC 229 in 2018. While Gaethje has the skill set to make it competitive and possibly even win, picking against Nurmagomedov is a fool’s errand. He’s one of the best of all time, he’s still in his prime and because we can predict the future only by taking into account history, Nurmagomedov has to be the pick.

Real or not: Gaethje won’t stop Nurmagomedov from pressing him up against the cage, and that will prove decisive

Unlocking Victory breaks down how effective Khabib Nurmagomedov is going for takedowns against the cage and how Justin Gaethje can counter.

Wagenheim: The cage is Nurmagomedov’s friend. When he has an opponent trapped against the fence, the fight is going to the canvas, no doubt about it, and that is where the beatdown commences. So fending off Khabib is just a matter of staying in the center of the Octagon? It’s not that simple. Nurmagomedov will attempt a takedown in open space, and if his opponent successfully defends, Khabib will just keep going at him. The champ’s chain wrestling attack keeps the other fighter on the defensive, and guess where the fight eventually ends up: against the cage.

Nurmagomedov has not been held without multiple takedowns in a fight since 2013. So it’s not going out on a limb to project that he’s going to get Gaethje to the canvas a time or two. But do you know what else Khabib has not had since 2013? A first-round finish. That suggests that Gaethje will have more than one chance to fight where he’s most dangerous — in the stand-up — because that’s where each round begins.

It’s when your offensive output is so unrelenting that Khabib is kept on the defensive himself and cannot get his wrestling attack into rhythm.

Do you remember how McGregor’s coach, John Kavanagh, assessed his man’s 2018 fight with Nurmagomedov? He said they spent so much time in training camp sharpening McGregor’s defensive wrestling that on fight night, his famously accurate and lethal stand-up attack was not on point. “We focused on defense too much,” said Kavanagh.

Gaethje cannot focus on staying out of danger. He must go into the fight with the mindset of putting Nurmagomedov in danger. If that’s his mental approach, he has a chance of walking out with the belt. If not, no shot.

Real or not: If Gaethje wins, he’ll call out McGregor. If Nurmagomedov wins, there will be no callout

Georges St-Pierre talks about a possible comeback to the UFC, and his potential interest in a fight vs. Khabib Nurmagomedov.

Okamoto: See, this is what makes the news that McGregor will fight Poirier on Jan. 23, so odd to me. Or at least, the timing of the news. Why is McGregor so bullish about fighting Poirier, when the lightweight championship is right around the corner? And I’ll say this, it wouldn’t shock me if the UFC (or McGregor) drags its feet on the paperwork of the Poirier rematch, just to see what happens on Saturday. Because, yes, if Gaethje wins, he’s calling out McGregor. And I believe McGregor would want it.

If Nurmagomedov wins, things are far less clear. No, I don’t think there will be a “callout” per se. But I do think if Nurmagomedov wins, he will be asked about a fight with Georges St-Pierre, and he’ll answer honestly that, yes, that’s a fight he wants. Whether or not it happens, who knows? But it will get brought up.

Real or not: Robert Whittaker will remind people why he’s one of the top two middleweights in the world

Darren Till and Robert Whittaker take turns dropping each other to the mat early in their main event matchup.

Helwani: This is very real. I think people are somewhat sleeping on Whittaker going into Saturday’s fight because they want a fresh matchup for the champion, Adesanya. If Cannonier beats Whittaker, seems like a no-brainer to book Adesanya vs. Cannonier next for the middleweight title. However, if Whittaker wins, things get a little complicated because Adesanya just beat Whittaker in very convincing fashion a little over a year ago, and I don’t think there is a great demand at the moment to see that rematch anytime soon.

So, as a result, I feel like the public is somewhat subconsciously ignoring Whittaker going into this fight. But lest we forget that Whittaker looked great against Darren Till in July and that Cannonier hasn’t fought in about 13 months. Those two factors favor Whittaker. Also, this is by far the biggest fight of Cannonier’s career, while Whittaker has been here before. In addition, this will be the toughest fight of Cannonier’s career, and if he wins, he will have earned a title shot, no doubt. But I don’t think a “W” comes easy, and I think Whittaker is on a mission to prove he’s still very much the man at 185.