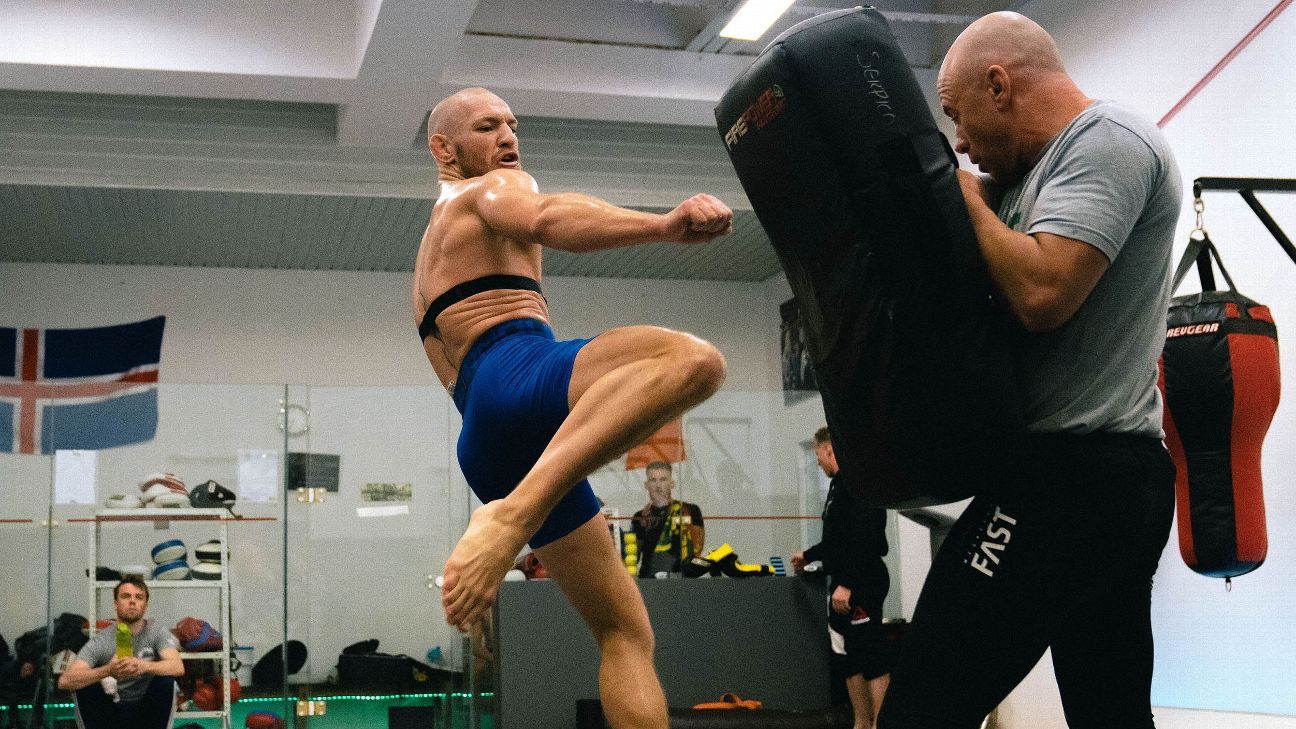 
Conor McGregor laid on the mat of the UFC Octagon looking toward the ceiling, his hands clasped behind his head. It was March 5, 2016, and McGregor’s chest was heaving with deep breath after deep breath.

The mixed martial arts superstar had just suffered his first UFC loss, a second-round submission defeat against Nate Diaz. As he stared up at the lights inside the MGM Grand Garden Arena in Las Vegas and UFC 196 came to a close, McGregor knew why he succumbed.

Conor McGregor will return to the Octagon for the first time in a year in the UFC 257 main event. The former two-division UFC champ will take on Dustin Poirier in a fight that could decide the next lightweight title challenger. The bout is a rematch from their meeting at UFC 178 in 2014, a first-round TKO victory for McGregor.

Exactly three weeks later, McGregor sent a Facebook message to an old friend, former pro cyclist Colin Byrne. On March 26, 2016, McGregor asked Byrne if he could assist him with his endurance and stamina, writing, “I felt I struggled in that fight because of the cardio.”

“We thought it would only be for a week to point him in the right direction,” Byrne said. “But we kept going.”

Almost five years later, the group is still together. And as McGregor prepared for his UFC 257 main event against Dustin Poirier on Saturday in Abu Dhabi, the bulk of McGregor’s training camp took place at Shinobi, 2,000 miles away from McGregor’s Irish homeland. McGregor’s entire team — MMA trainers, conditioning coaches, sparring partners, a nutritionist, a photographer and more — descended on Lagos on Portugal’s majestic Atlantic coast.

There were no tourists around due to COVID-19, Byrne said. No fans trying to catch a glimpse of McGregor or loitering for a selfie. The people in the small town, Byrne said, were just “proud he was there.” As McGregor, a former two-division champ, attempts to make another run at the lightweight title he once held, the sprawling gym with the scenic views has become a key component in his training — now and for the future.

“This is why I wanted a place like this,” Byrne said. “Now it’s one of the very few places where he can go and get away from everything.”

McGregor has not minced words about his Portugal-based preparation for the Poirier fight, which will be his third at 155 pounds in the UFC.

“It has been the greatest camp, the greatest weight transition I’ve ever endured,” McGregor said in an interview with ESPN’s Ariel Helwani. “It’s not even ‘enduring.’ I’m embracing it.”

In May 2016, two months after the loss to Diaz, McGregor prepared to fly to Lagos with head coach John Kavanagh and training partners Artem Lobov and Lee Hammond. Before they left Ireland, Dalby took McGregor into a Dublin lab for metabolic tests and brought the data with him to Portugal.

For a week, McGregor did a lot of cycling with Byrne and Dalby. Running was troublesome at the time due to a knee injury. Byrne and Dalby showed McGregor split routines, dividing workouts over several hours or several days. Byrne said McGregor’s biggest problem — the root of his cardio issue — was that he was “overtrained.”

“MMA lends itself to over-competitive guys,” Byrne said. “They’re competitive about ‘first guy in the gym, last guy out of the gym.’… That falls into the problem of overtraining. Once you fall into that, it’s hard to get out of that.”

During training that week, Byrne and Dalby had McGregor do five 30-second sprints on the rowing machine. That was the extent of the workout, but McGregor felt like it wasn’t enough.

“When he finished, he started doing chin-ups and was looking to do other stuff,” Byrne said. “I said, ‘No, no, we’re done. Now you go home, you have some food, you have a nap and you come and do the second session.’ That’s the way it works.”

When McGregor and the team were set to leave Shinobi, the UFC headliner had a proposal for Byrne: Come with me. McGregor was heading to Iceland and then Las Vegas for his training camp to prepare for the second Diaz fight, at UFC 202 on Aug. 20, 2016. Byrne agreed.

Three months later, McGregor’s cardio was again tested in the second and third rounds of his rematch against Diaz, but McGregor came back to win the fourth round in a majority-decision victory.

“His conditioning has improved remarkably since the start, since the Nate Diaz 2 fight,” Byrne said. “This is something that we are not just able to say by observation, but we’re able to back it up with hard data and real numbers.”

Two years ago, McGregor hired Byrne and Dalby full time — Dalby as a coach and Byrne as “soigneur,” a cycling term for a team member who does a bit of everything. The pair also runs the McGregor FAST conditioning program out of Shinobi.

“He had a Ferrari, but he was pouring diesel into it before,” Byrne said. “It was a Ferrari under there, but it was layers deep under not servicing the car and not knowing how to [use it].”

It wasn’t a straight-upward trajectory by any means, as McGregor dropped a one-sided loss when he challenged UFC lightweight champion Khabib Nurmagomedov in October 2018. McGregor has talked about his own lack of discipline during that camp.

“What could you do? You could bring a horse to water, but you can’t make him drink. We all committed, we all tried our best and he fell short. But that’s him at his worst, and that’s Khabib at his best. In hindsight, it was probably one of the best lessons he’s ever learned. You’ve gotta hit bottom. There’s a lot of lessons in the losses.”

After a long layoff from the Octagon, which included a foray into boxing against Floyd Mayweather, McGregor turned his focus back toward a return to UFC greatness.

According to Dalby, McGregor’s new system — backed by scientific and technological resources — was mostly locked in place ahead of McGregor’s fight with Donald Cerrone at UFC 246 last January. The result was a 40-second, TKO win.

But things really started running on all cylinders over those 10 weeks late last year in Portugal. It was the kind of camp that few MMA fighters can afford, with multiple coaches and trainers dedicated only to him on the Southern European coastline.

On Unlocking Victory, Dominick Cruz breaks down how Conor McGregor set up his knockout win vs. Dustin Poirier in 2014.

McGregor did those two-a-days in a cycle — three days on and then one off, three weeks on and one week off. The weeks off were active recovery, Byrne said, featuring workouts such as rock climbing, yoga, movement drills, fishing or maybe a pad session here or there. With an eye toward recovery and maximum efficiency, McGregor’s camp also wound down the intensity as the fight drew closer.

“My last double split finished [Jan. 13]. Now, it’s just single sessions,” McGregor told his website TheMacLife. “The weight is on point, I have bags of energy and I’m very excited to get in and showcase myself at 155 pounds again. That’s it. I put in the work, and I will reap the rewards.”

Another key factor was how the entire team was in sync. Over those 10 weeks, McGregor had nutritionist Tristin Kennedy by his side, cooking and weighing macro- and micronutrients down to the gram.

“The collective [team] was there,” Kennedy said. “When you have the collective together, you’re able to touch base on what’s going on. ‘What’s happened today in the striking, Owen? What’s happened today with the cardio, [Dalby]?’ So on and so forth. When you’re able to go into the specifics with his condition, you’re going to get better results every time. Having the team out there and having everyone in one [location] was great.”

Byrne said weightlifting was implemented more in this camp, but the changes in McGregor’s body have happened over time. Sutcliffe joked in an interview with Helwani that McGregor’s physique now looks like that of a “film character.”

The biggest difference between the McGregor going into Saturday’s fight and the McGregor from a few years ago is how he understands his own body, Dalby said. McGregor now knows how much energy he can expend and for how long, and then how long it will take him to recover and go again.

“One of the reasons that people love to watch a Conor McGregor fight is because it’s action-packed,” Dalby said. “He comes out grenade-throwing, guns-blazing, all-out. That’s one of the things you often hear Conor say — he’s all-in, because he tends to go head-first into something.

“It has been the greatest camp, the greatest weight transition I’ve ever endured. It’s not even ‘enduring.’ I’m embracing it.”

“By knowing his own body better now, he’s able to pace himself and able to recover much better between rounds.”

There are few strikers with his precision, timing and punching power, but as the fight goes deeper, McGregor has tended to slow down and start sucking wind. McGregor made a conscious effort more than four years ago to fix that problem. And the results are now fully there, his team said.

“He’s an outlier in the game of MMA, as in he’ll change the sport in a lot of ways,” Byrne said. “But also in how we approach cardio. I know people say he doesn’t have cardio. They don’t know what they’re talking about.”

The end result that McGregor and his team are after — a second victory over Poirier and another shot at the UFC lightweight championship — are within reach. And in McGregor’s mind, this camp is a major reason he’ll be successful.