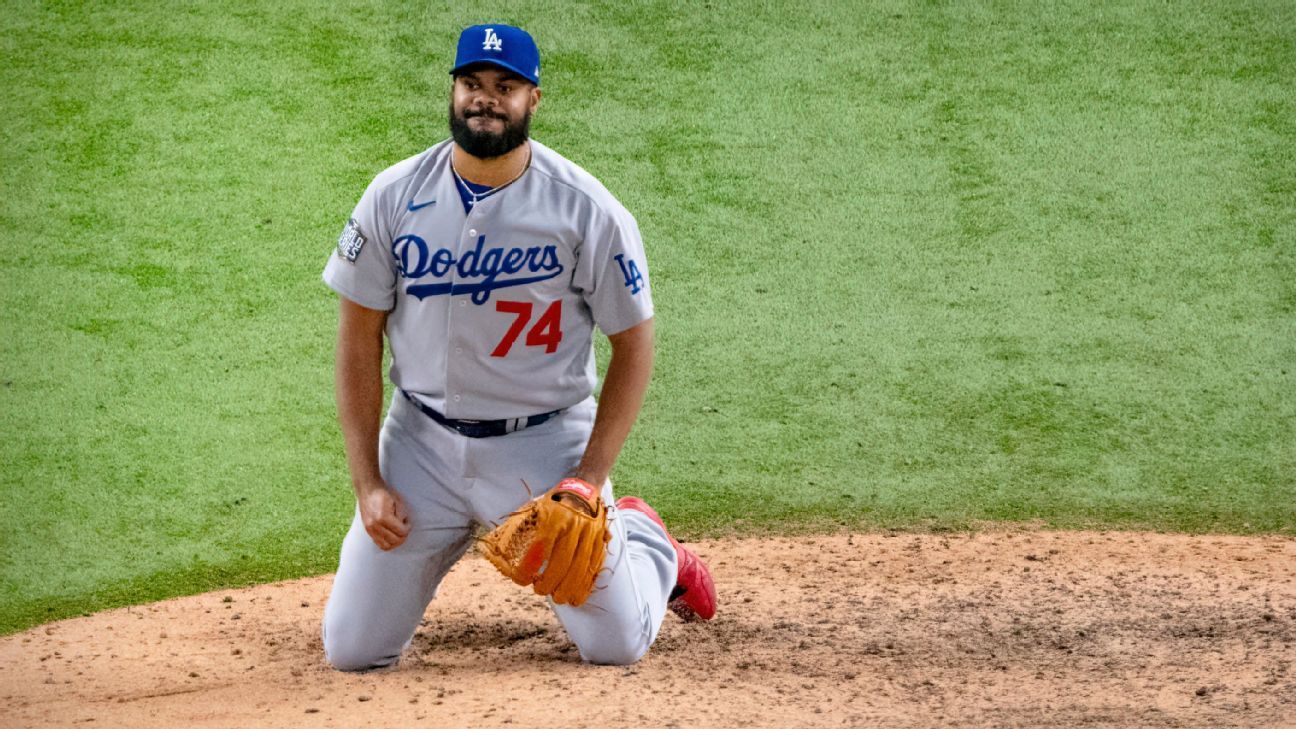 
ARLINGTON, Texas — Both the allure of and the disgust for this time of year can be captured in how the minute details profoundly impact what resonates. If Kevin Kiermaier‘s shattered-bat, ninth-inning blooper is hit an inch or two more shallow, Enrique Hernandez probably pulls off a diving catch, and maybe we’re talking about how Justin Turner — the local kid who watched Kirk Gibson from his grandmother’s living room — has his childhood team one win away from a championship.

If home plate umpire Chris Guccione pulls the trigger on a 1-2 cutter that tailed slightly outside on Randy Arozarena, the final out is recorded, and maybe we’re talking about how Kenley Jansen — the demoted longtime closer who earned his way back at the perfect time — recorded the most important save of his life.

If Pedro Baez throws his dominant changeup to Brandon Lowe in a crucial sixth-inning at-bat and doesn’t give up the home run that spiraled everything out of control, maybe we’re talking about how Clayton Kershaw — of all people — can pitch the Los Angeles Dodgers to a World Series title on Sunday.

Instead, it’s manager Dave Roberts’ bullpen management. It’s Chris Taylor‘s bobble. It’s Will Smith‘s drop. It’s Jansen’s mental lapse. It’s an 8-7 loss to the Tampa Bay Rays and a Series suddenly, shockingly, tied at 2. It’s the Dodgers, reeling after the most improbable of ninth-inning comebacks, and how they somehow bounce back from this.

“We can’t let this beat us,” Jansen said late Saturday night. “We have to let it go.”

Jansen, who worked to simplify his delivery earlier this month, was unquestionably sharp when he took the mound hoping to protect a one-run lead. The one-out single he allowed to the No. 9-hitting Kiermaier, which fell just beyond Hernandez in shallow center field, was hit 64 mph. The two-out, game-winning single by Brett Phillips, hit to nearly the exact same spot, traveled 83 mph. Both were flares.

Taylor — playing center field as part of the ripple effect that began with Cody Bellinger having to move to designated hitter because of a stiff lower back — lifted his head to watch the speedy Randy Arozarena as he began his turn of third base and briefly lost sight of the baseball, prompting an aggressive send by Rays third-base coach Rodney Linares.

Taylor retrieved the ball quickly and threw to Dodgers first baseman Max Muncy. Arozarena tumbled. He was primed for a rundown. But Smith, the Dodgers’ 25-year-old catcher, wasn’t aware. He attempted to field the throw and make a quick swipe with his glove, but the baseball squirted away. If Smith knows where Arozarena is, maybe he takes his time and secures the ball first. And if Jansen is backing up the play, rather than standing directly in front of it, maybe the game extends into extra innings.

“Yeah,” Turner said afterward, “that was uncharacteristic of us.”

Game 4 began to turn in the bottom of the sixth, when Baez replaced Blake Treinen with two on, one out and Lowe up to bat. Opposing left-handed hitters slugged .111 off Baez’s changeup this season. But with the count at 2-2, Baez shook off a sign for the changeup, threw a four-seam fastball instead and watched it travel 399 feet for a go-ahead, three-run homer.

After Baez recorded the next two outs, Roberts greeted him in the dugout and told him he was finished. Then the Dodgers got a two-out, pinch-hit, two-run single by Joc Pederson in the top of the seventh and retook the lead. Then Roberts asked Baez to come back out for the bottom half.

*If necessary
All games on Fox and ESPN Radio

Baez gave up a game-tying home run to Kiermaier. Then the Dodgers retook the lead on an eighth-inning, two-out single by Corey Seager, and the Rays somehow walked it off against Jansen, who suffered the fourth blown save of his postseason career — all of which have come in the World Series. The Dodgers became the second team to lose a World Series game despite accumulating 15 hits and the eighth team to lose a World Series game in the bottom of a ninth inning they originally led.

The Dodgers steamrollered through the regular season, swept through the first two rounds of these expanded playoffs, fought all the way back from a 3-1 deficit in the National League Championship Series and clearly hit their stride offensively through the first four games of this series, setting an assortment of records for home runs and two-out hits. Their best players were thriving. Their pitching was in order. After so many great teams came up just short this time of year, it seemed like everything was lining up for them to finally win it all.

Then it all unraveled.

Before the Rays’ walk-off, Baseball-Reference’s championship win probability added gave the Dodgers an 81% chance to win the World Series. After 13 seconds of madness, their chances were down to 52%, representing the second-highest single-play shift in a non-clinching World Series game.

The question now: Can the Dodgers recover?

Champion British jockey Oisin Murphy handed 3-month ban
After a car accident and a year removed from the ring, will Errol Spence Jr. be the same fighter?
ICC makes U-turn, to revisit plan for extra global event in next eight-year cycle
Mick Schumacher remains on course for F2 title despite seventh in Bahrain
Jolyon Palmer column: ‘I was wrong about the halo and happy to admit it’